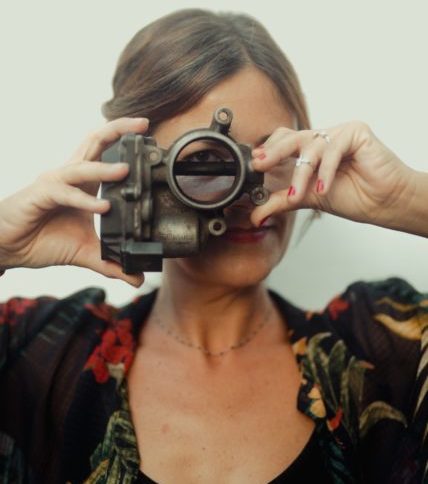 Ela Vin will open her “Caja de Mariposas” on the 29th of January at 22:00h in La Salà (Valéncia) 2022. Tickets are already on sale at Movingtickets.

The singer-songwriter  presented this new EP live for the first time, accompanied by her usual musicians: Txema Mendizabal, Gilberto Aubán, Alex Casal and Carlos Solera. On this occasion, she will also have a special guest too.

“The EP, ‘Caja de Mariposas’, does not bear this name alluding to a container full of insects about to take flight; but it does satisfy the expectation of opening an ark from which five songs sprout with the delicate beauty and diverse colours of their wings,” says her management company.

The origin of the title of this new work is much more mundane and banal, but it lends itself to an amusing play on words and concepts: The butterfly box is a valve that allows the mixture between air and fuel to be proper in a car; metaphorically, it is the heart of a car.

“I found out that it was a part of the car’s engine precisely because of a breakdown I had a few months ago. The first thing that came to my mind after cursing the price of the “little box” was how something so rough could have such a bucolic and suggestive name”, says the artist.

New sounds
Although “Caja de Mariposas” does not break with the close ties that Ela Vin has woven with Latin America – and which she expressed forcefully in “Tlazohcamati”, her previous LP – it does open up to other sounds, references and tessituras, giving it a richer sound and opening up new paths to this intimate and personal universe that she shares with the public.

In “La Casa” and “Lupita” the taste and that bridge with Latin America is very evident, “Miedo” and “Otto y Ana” are close to folk, while “Pedazos” deserves a separate chapter for its approach to the best of the new French chanson.

“I’ve been very attached to Latin American music for a long time and at the end of the day, that comes through in the compositions. I think the previous work was influenced by life experiences very close in time to my experiences in Latin America. But I don’t think there is a change of sound with this one, perhaps it is more varied in styles.In truth, each track has its own universe, but they all maintain a common denominator that unifies them: subtlety and organic production”.

“Caja de Mariposas” kicked off with the presentation of the single “La casa”, a bossa nova, which uses the sensuality of the Brazilian rhythm to narrate the luminosity of the beginning of a story.

It continues with “Lupita”, a song dedicated to the creative process, to the search for the muses. It narrates in a romantic way the process of composing a song, while “Miedo” is about that crouching and terrifying shadow that, in various forms, destroys everything it touches.

For “Otto and Ana”, Ela was inspired by the theme of the characters in Julio Medem’s film “Los amantes del Círculo Polar”. It represents the search, the longing, the courage and the frustrated encounter.

For this EP, Esther Vinuesa, the name behind Ela Vin, repeats the team and continues to walk hand in hand with experienced musicians, among them Txema Mendizabal on pedal steel, with whom she has collaborated since her beginnings. Xema Fuertes, who also acts as producer and is in charge of backing vocals, guitars, timple and tres, and Cayo Belleveser on double bass and bass.

Esther, responsible for the music and lyrics of her songs, also leaves her sonorous mark on the backing vocals, acoustic guitar, vibraphone and accordion, an instrument she has mastered and which has marked her career, although on this occasion it is not so present and only appears on “Pedazos”.

However, the Valencian artist’s new routes are not only melodic, they are also evident on the cover of this album, which for the moment will only be available digitally, as unlike her previous works, the cover of this EP, illustrated by Sandra Pena, is closer to the image of an instruction manual than a typical album cover.

“Javi Belda and I did the design. The numbers that appear on the cover as if they were references to the butterfly box are actually the minutes of each of the songs that make up the EP. Elements, some loose, that are necessary for the whole piece to be meshed or complete. So the big piece is completed with the referenced parts, which would be the songs,” Vinuesa explains.

“Playing with a cold, industrial engine part seemed to me to contrast with the emotionality and warmth of the songs. I don’t think the first thing that comes to mind with “Caja de Mariposas” is a car part, but something related to a bucolic and romantic image. I liked the idea of this  play on words in general”.

Special mention should be made of the video for “Pedazos”, a song inspired by the minimalism of Yann Tiersen. A sweet and innocent melody that vindicates the healing power of the embrace through the drawings of ATI (@le_patille), responsible for these illustrations, which abstract us to a magical world animated by Iván Moreno (The Kaiju Lab).