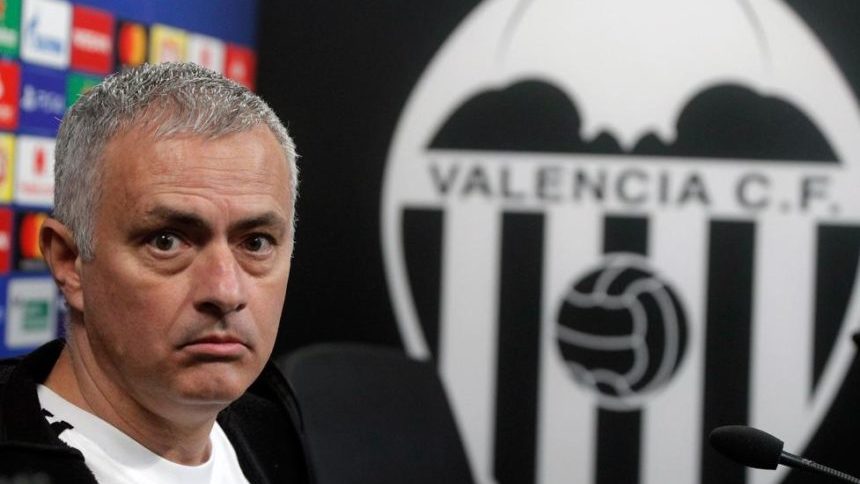 ##The ‘24/7 Valencia’ connection with José Mourinho stretches back to 2007, when Chelsea beat Valencia in the Champions League in a memorable match at Mestalla. At the post-match conference, we asked the question that was on the tip of the tongue of many journalists in the room as rumours were spreading that Mourinho was looking to leave the London club and Real Madrid had the cheque book ready. Indeed, Chelsea’s defensive press representative could sense trouble and initially blocked our troublesome question (24/7 Valencia:“José Mourinho, do you see yourself in Spain next season?”) in English regarding Mourinho leaving Premier League football for La Liga: “Only questions in Spanish!” so we quickly reverted to asking the same question but in Spanish… to roars of laughter in the sala as Mourinho was happy to break free of Chelsea protocol (probably not for the first time) as he answered ’24/7 Valencia’ in English. Indeed, ‘The Guardian’ contacted us the next day to say that our interview had made headlines in the international press.

24/7 Valencia: Do you see yourself in Spain next season?

JOSÉ MOURINHO: “Good one! I have a contract until 2010 and I want to continue at Chelsea. It would be an honour to coach Madrid but it is not something I want to think about now. If my name is linked to Madrid it’s not because I have done anything to make that happen. Chelsea is a club I love, one where I want to continue.

But if I have to leave for some reason or because someone wants me to leave, then that’s life in football. If I leave, I want to work at another European club. I like English football and it would be nice to work at another Premiership club but not now. I will not even contemplate leaving Chelsea and going straight to another English club. That would be very strange – and it’s something I don’t want to happen.

What I want is to remain in England and remain with Chelsea. But sometimes in life you cannot get what you want. If I cannot train here I will train another team.”

By 2011, Mourinho was now Real Madrid’s manager and his reputation had grown, having won an astonishing “triple” at Inter Milan (Champions League, Scudetto and Cup) before moving to Spain for a new challenge with Real Madrid.

This time around, ‘24/7 Valencia’ met Mourinho just outside the press conference room after Real Madrid had beaten Valencia in Mestalla. Off the record and away from the cameras, we discussed his hometown of Setúbal in Portugal amongst other topics. Away from the public eye, he was warm and informal and rather human even! It’s a positive part of his character that his own players have often remarked upon, his public persona as a pantomime villain is more like an invented role he plays to protect his players. You can’t always judge a book by its cover.

Fast forward to 2018, ‘24/7 Valencia’ attended what turned out to be Mourinho’s penultimate press conference as manager of Manchester Utd. That night, the Reds lost 2-1 to Valencia in the Champions league but still qualified as second in the group to Juventus.

Former ’24/7 Valencia’ writer Sid Lowe wrote many Valencia Football articles for ‘24/7 Valencia’ in the early years of the magazine. Working for ‘The Guardian’, he asked a key question as ‘24/7 Valencia’ took exclusive photos at this slightly surreal post-match conference. Struggling in the Premier League, with a weary Mourinho perhaps sensing that his time was mutually coming to end with the owners of the famous English club:

Sid Lowe: With hindsight, do you see that there has been an opportunity lost (losing to Valencia)… the chance to have won this group and make progress in the competition that little bit easier?

JOSÉ MOURINHO: “I think that to qualify in this group is a success…never a failure. To finish second in this group is always a success. Before the game, I told the players that if we win tonight and Juventus win…we did our job. If we don’t win and Juventus doesn’t win…we can blame ourselves. I don’t think that the draw will be significantly different, apart from a couple of clubs that are clearly much better than the others. I think there are teams that finish second that the ones that finish first are not happy to play against. Now, there are combinations in the last 16 that you would only get before in the quarter-finals. In Pot One, the scenario changes completely in terms of combinations. Now, the finalists of the previous Champions league final can meet each other in the next round, as an example. I don’t think the problem is about the draw. This was a good match to play, a match without any kind of pressure…a competition that everybody likes to play. In the end, my team improved really when i made the changes that I didn’t want to make, which is a little bit of frustration because I didn’t want to play the 3 players that I played in the second half. I learned nothing from this game.”

A good friend of Valencia CF owner Peter Lim, Mourinho has been linked with taking over as manager at Mestalla a number of times over the years. Indeed, bookies were betting on him moving to Valencia CF before he commited to Tottenham. In the end, he chose to stay in England…despite being offered the post at Valencia by Lim.

In April 2021, Mourinho has been sacked at Tottenham Hotspur F.C. after just 17 months in charge.

Owner Lim has always insisted that his project at Valencia is long term. If the chance comes along, it will be interesting to see if the legendary José Mourinho will now be ready for a new challenge at Valencia. Sources close to Peter Lim have confirmed that a call was made between him and Jorge Mendes, the Portuguese coach’s agent, to arrange a meeting in the coming days to discuss the possible arrival of Mourinho at Mestalla.…