You are here: Home  /  Editorial  /  Places  /  A RIVER RUNS THROUGH IT
Editorial 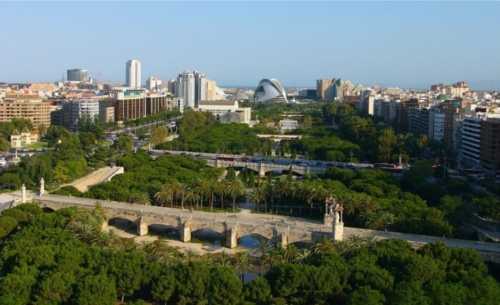 A RIVER RUNS THROUGH IT

Well, it’s not really a river at all anymore, is it?

As everyone knows, it was drained and the river re-routed after the tragic floods of 1958. Just like Agua de Valencia, there’s no water in it. What now flows through the city in its place is an elegantly dusty, meandering park which has become a classic part of Valencia life and, even more so than the beach, the place to go in Valencia for sport, recreation and a Sunday stroll.

The old riverbed connects Mislata to the sea, the Bioparc to the City of Arts and Sciences and IVAM to the Museo de Bellas Artes. Ten kilometres of trees, grass, football pitches and off-white concrete and clay shimmying through the city means that half the population, from the Barrio del Carmen to Avenida de la Plata, from Avenida del Puerto to Campanar, can say they ‘‘live near the river’’.

It’s bridges have long been a demonstration of showy civic pride. The five 14th and 15th century bridges were commissioned by the Junta de Murs i Valls (a kind of medieval public works ministry). These were the only bridges to survive the various great floods intact (while other later bridges were destroyed) and stand now as a monument to Valencia’s golden past alongside the modern designs of Norman Foster and Calatrava (the Valencia architect is responsible for three of the Turia’s bridges). The steep river walls and large stone spheres which can be seen all along the sides of the river were designed by Juan de Herrera, the Renaissance architect of El Escorial, in order to give a uniform grandeur to the area inspired by the work going on at that time along the Thames River in late 16th century London.

The river of course, has always played an important role in the history of Valencia. The Romans navigated up the river and saw it as an excellent defensive barrier for the city. When the city walls were first built in the first century BC, the river served as a moat offering extra protection. The Muslims called the river Guadalaviar, ‘the white river’, due to its fast flow and high level of calcium. After the reconquest, the river was used as a place of execution for those Muslims who would not turn to the Christian faith. The Inquisition burned heretics, witches, traitors, and basically anybody else they didn’t particularly take a shine to under the Puente de San José, near to where the Na Jordana falla is burned today.

The river had always had an irregular flow which made its floods all the more devastating. With the constant building of channels for agriculture and dams and reservoirs, most of the year it was reduced to nothing more than a muddy stream. Farmers would graze their livestock in the riverbed and traditionally city dwellers would go down to the riverbed at Easter to eat hard-boiled eggs, fly kites and get mud and cow dung all over their Sunday clothes. In the 19th century, along the south side near La Pechina, there was a huge slaughterhouse (now the Complejo de la Pechina sports centre). The blood of the slaughtered animals washing away into the river became a common sight. Further down, near the Torres de Serrano, the tanners would bleach animal skins along the side of the river, giving the area its present day name of ‘Blanquerías’.

After the flood of 1958 a new route for the river was built outside the city. The question remained what would be done with the old riverbed. The Government backed a proposal to build a dual carriageway all along the riverbed which would connect the city to the airport. If the powers that be during dictatorship had been prepared to shell out a bit more money on Valencia urban development, this crazy plan may well have gone through, but luckily for us they never got round to it.

Towards the end of dictatorship and the first few years of the fledgling democracy the idea of making the river into some of kind of park pained pace. The slogan ran ‘‘Volem el riu i el volem vert’’ (we want the river and we want it green). The original idea was to create areas of natural-looking woodland. The Generalitat involved the people and schools of the city calling them to ‘‘come and plant a tree in the river’’. The two areas where the planting took place (near the end of the alameda before the Viveros and just the other side of the bridge upriver from the football pitches below the Torres de Serrano) were the first areas to be developed and still today keep their ad hoc natural feel. Some Valencia families will proudly point out the tree they had a hand in planting.

This heady post-dictatprship rush to leave things to the people soon wore off and the developments in the ‘80s and ‘90s with the Palau de la Música and its landscaped gardens, the laying of the first football pitches and Gulliver & the Riu de Xiquets (children’s playground) have a much more municipal feel about them. These in turn led to the grand statements of the construction boom era, the futuristic City of Arts and Sciences and the not-quite-finished-before-the-recession Agora. The new Parque de Cabecera on the edge of the city around the Bioparc is gentler and perhaps more fun.

The river is now a central part of what goes on this city. It’s the venue for fireworks and rock concerts in Fallas. There is open air jazz at the Palau de les Arts. There are classical music events and open air cinema festivals. The Nations Fair, the Alternative Fair, the Andalusia Fair and, of course, the Wine Fair (that’s this month, see you there) are all held in the riverbed. There is a constant stream of joggers and cyclists; there are football, baseball and rugby clubs. It hosts athletics (in the ‘Estadi del Turia’ stadium below Nuevo Centro) and tennis (in the Agora). While, like any city park, it’s unlit, strange and dangerous at night, on a warm afternoon it’s the perfect place for a lazy walk, a picnic, a kick about or a siesta under the trees. And to think it could have all just have been a 1960s motorway!