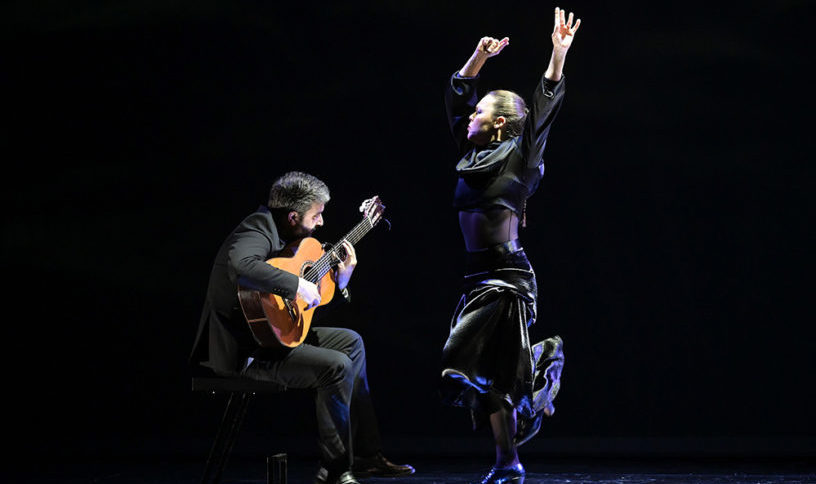 A ROUND OF APPLAUSE FOR THE DANSA VALÈNCIA FESTIVAL

From well-loved venue stages to unconventional locations, from April 2-10, the city was alive with movement for the Dansa València festival. Showcasing dance and movement from 32 companies, 19 spaces were full of performances on the cutting edge of Spanish and international contemporary dance. Here at 24/7 Valencia, I had the pleasure of attending five performances throughout the week of the festival. Creative, mesmerising, and at times heart-wrenching, these shows were something to remember.

Replacing ‘Inicio (Uno)’ which was cancelled due to illness, this performance was a fantastic display of flamenco by Malagueña dancer Rocío Molina, who was accompanied by two brilliant guitarists on an otherwise empty stage.

“What accompanies me on stage is my ego and two completely different guitars. Eduardo Trassierra is harmony and technical complexity. Yerai Cortés is all intuition and naturalness,” says the dancer, who was awarded the Silver Lion for Dance this year at the Venice Biennale.

Molina moved like a riverbed, liquid over edges of rock. Her wrist rotations and arm movements had a perfect fluidity, and her body percussion was as sharp as castanets. Moving smoothly through contemporary poses and flamenco, every tap from her feet was distinct and clear.

Changing from a rippling velvet skirt to an impressively long and ruffled flamenco dress, to a skinsuit with a matching tunic patterned with flowers, Molina showed versatility while always staying integrated with the music. The stage was large, but full of Molina’s presence, the skilful lighting, and the overlapping rhythms of the two guitars.

One night at the golden bar

In a cheesy, dramatic, yet fragile declaration of queer love, Alberto Cortés took to the stage in a performance falling somewhere between song, poetry, and monologue.

Moving between three small raised stages pooling with golden fabric, wearing ruffles and pearls of white, Cortés took on the imagery of an angel. He stood small in his vulnerability, the vulnerability of not being loved back. Comedic and beseeching, this unusual one-man show took the pain of unreciprocated love and wrapped its helplessness in witty jokes and asides. Yet, like light, that pain still showed through the cracks.

Cortés does not come from a dance background, yet he used the limits of his movements skilfully, while live musician César Barco accompanied the humour and lingering yearning of the performance. Angelic harp strings and demonic voice distortion paired perfectly with Cortés’ wild exaggerations which ranged from  playfulness, bleak despair, and self-aware cheesiness.

Choreographed and performed by Lucía Montes and Mado Dallery, this was an intimate pas de deux. Counterbalances, easy lifts, and arms linked, Montes and Dallery twined themselves into knots together and unwound them with precision.

During the 20-minute performance, the stage lightened from black to cream to white, like an arrival into heaven. Wearing cream and white, the duo moved with smooth abandon, reflecting and sliding off of each other’s mirror surface.

Showing impressive athleticism and musicality, the performance ended in an impossible backbend. Stacked atop each other, bending gradually backwards, and slowly lowering to the floor.

Flamenco can be found in unusual places. Percussion can be created with wrenches, a metal pole, and a shopping trolley. A show can open with a car driving into a patio space, and close with a flourish of smoke and light.

‘Máquinas sagradas’, a performance created for a car mechanic’s workshop, paired the prayer-like vocals of Jorge Mesa with the choreography and performance of Juan Carlos Lérida. Lérida captured the audience with his easy grace, making it clear why he is considered a representative of avant-garde flamenco.

The peaks of their heads were crowned in gold leaf, and gold embroidery exploded like a star from the chest of Juan Carlos. This, combined with Mesa’s strong emotional voice which echoed in the enclosed patio of La Mutant, created the ‘holy’ atmosphere of ‘Máquinas sagradas’.

From dancing atop stacks of scattered car number plates to using the car bonnet itself as a percussive instrument, ‘Máquinas sagradas’ showed the audience how anything can be made into flamenco, and anything can become sacred.

‘Migrare’ was the final and most impactful show I attended during the festival week. Brutally emotional and technically excellent, the dancers from the Valencian company Cia.Maduixa perfectly translated a story of migration and struggle.

Wearing stilts, the four women became a herd in search of new land. Moving in unison, they struggled against invisible borders, lifting each other and falling to the floor in exhaustion from their journey. Wordless singing, judders of the cello and longing violin notes intensified the emotions of the performance to almost unbearable strength, as the dancers fought to survive in a deeply moving display.

The women became prey under a spotlight, the music a terrified string heartbeat, as they ran for their lives. Encountering a barrier they couldn’t push alone, they kicked and burst through together as the score sang, bringing tears to my eyes. They prayed, hoped, and reached for the sky. They were captured, imprisoned, and interrogated. Lights made vertical and horizontal bars, and three pairs of hands grabbed and slid over the torso of the fourth in an excruciating build of assault.

Finally, finally, they broke free. The price was high, thrashing and throwing off a stilt – which by now we were accustomed to as a limb – like a bear chewing off a leg to escape a trap. They escaped, but at what cost? Unable to move as they used to, they reached for help that never came, covering their faces in shame. The women danced with clarity and precision, anger and vindication visible as they succeeded, running together lopsidedly, before breaking off one by one into the dark.

An extraordinary performance that fully immersed you in its narrative, ‘Migrare’ moved me to tears in hope, anguish, and pity. Words without words, each intuitive movement by the dancers sent a message that struck you in the heart.

The Dansa València festival truly showcased the variety and brilliance of Spanish contemporary dance. In a joyful return to Valencia after years of absence, each performance drew you into its own intricate world of movement, music, and story. For dancers and dance lovers alike, this festival not only presented the contemporary dance of today, but also the bright future of tomorrow.