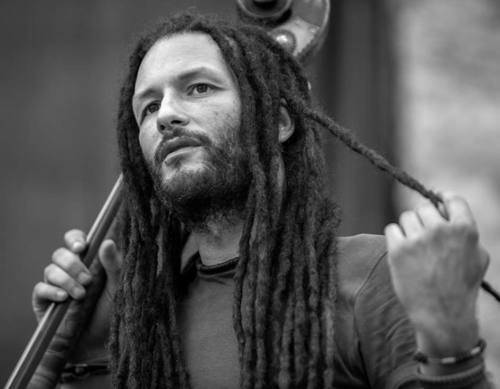 24/7 VALENCIA:1. Tell us something about your musical background…
ALES CESARINI: I don’t have a music degree. I have learnt from playing with many different musicians. I am self-taught. I have started courses at music conservatories but I always ended up leaving…
2. Why the double bass?
I started playing the electric bass and I also took up the double bass because of the music that my parents listened to, which was mostly reggae and jazz.
3. You have Italian and English blood. Do you know England and Italy?

My father is Italian and my mother is English. I was born in Valencia but I lived in Rome as a child. However, I have never been to England.

4. What are your musical influences?

I have many influences because I like so many types of music. As time goes on, I like to investigate different genres of music that are new to me.

5. What is jazz for you?
What i like about jazz is the spontaneity of creating music in the moment and the communication with other musicians.

6. Could you tell us about your interest in reggae music?
It is the first music that I started playing along to and the music that I have most listened to most since I was a child. It’s a concept of music that makes me really feel something. I suppose it is because my mother listened to reggae so much…

7. Could you take us through each track of your debut album, ‘Nyabinghi’ by the Ales Cesarini 5tet featuring Payoh Soul Rebel
Mr. Officer. This is a song that we have played a lot as a reggae group but we wanted a more acoustic sound for the record. Like the entire record, the lyrics are by the singer Payoh. This is a real story too… about something that happened to him.

Nyabinghi is the name of an African rhythm, which was the one we recorded for the song. Originally, we were going to record the track ‘Artibella’ by Ken Boothe but later it occurred to us to do something different.

Afro Dub is a song that was co-written a fair while back with the guitarist Santiago Pelaez, a musician and friend. We wanted to do something minimalistic because both of us are real romantics.

Light Blue is something that we recorded during a session with time to spare. The producer Javier Vercher told us to play something together and see what happens…and it happened!

Bui is a song dedicated to and named after my cat. It is played with an Arabic rhythm called Samai.

Love of life is a track by Payoh that also occured during an improvisation in the studio.

Cada Vez Que Escucho el Sonido is based on a phrase by a Jamaican poet called Mutabaruka and it somewhat represents the passion of our music.

Tell Me is the final track as we wanted to do something intimate to close the album.

8. Could you tell us something about the other musicians who played on this album.
Regarding the album, Payoh Soul Rebel is the main thread running through this particular work. Also, I have been fortunate to have recorded with great jazz musicians based in Valencia on this album. Javier Vercher, who plays tenor saxophone on this CD, also recorded and produced the album at his ‘Pannonica Vintage’ Studio. It also features French pianist Baptiste Bailly, drummer Pere Munuera and percussionist David Gadea.

9. Do you have any other projects going on?
I am actually playing in a lot of projects with different styles of music but I don’t want to highlight any single one in particular as i like them all.

10. How do you see Valencia as a place to live as a musician?
In my opinion, the Valencia music scene has improved a lot. I also believe it is because the musicians themselves have gone out of their way to make more spaces available for live music.

11. Could you tell us about your latest album, ‘Dandelion’?

It’s a look at the different ways of understanding music, without any kind of prejudice, from my experience in genres such as world music or reggae and jazz, which is an attractive sound and full of nuances. It features the magnificent voice and lyrics of the singer Payoh Soul Rebel and Baptiste Bailly’s taste for impressionist music on the piano. There is David Gadea’s fusion of world music and Mozarabic rhythms via percussion and a mix of soul, dancehall and funk within the grooves…

There are minimalist jazz and roots rock reggae bass lines that anchor the personal sound of this quartet, with Javier Vercher on sax and at the controls of the recording in his evocative ‘Pannonica Vintage’ studio. The album is immersed in a minimalist atmosphere that sails between the warm Caribbean atmosphere of the island of Jamaica and the solemnity of French impressionist music, without forgetting rhythm & blues or African tribal rhythms.”