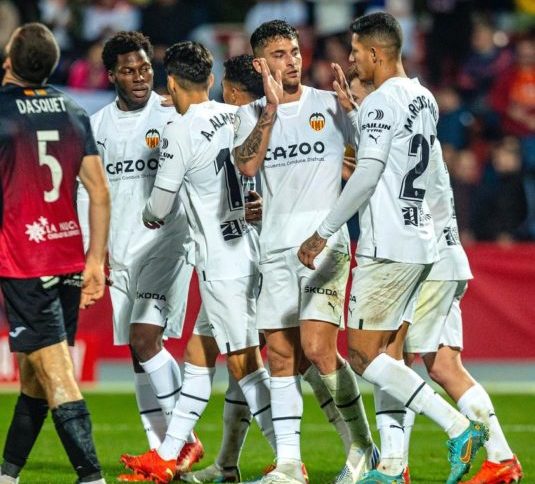 The same disappointments and failings continue to haunt Valencia CF. Their ability to successfully close out games remains elusive, and a winning mentality mindset is still out of reach. New Year’s Eve in 2021 and Valencia lose 2-1 to Espanyol after starting brightly and taking the lead. The opponent’s winner is scored two minutes from time against the run of play and all three points are lost.Exactly a year later to the day and “Groundhog Day” strikes once again. Taking the lead at the wonderfully revamped Estadio de Cerámica,  Valencia are in control in the local derby with Villarreal. A loss of concentration, just before half time, sees Samuel Chukwueze equalise with a well-taken goal.The team are looking to be heading back to the Mestalla with a well-deserved point when World Cup winner Juan Foyth heads home, unchallenged, from a Dani Parejo corner with two minutes left on the clock.

Another defeat was hard to stomach for all concerned with Valencia. All too often, last year, this scenario was common place. Late goals costing points and thwarting any consistent improvement in the league standings.

Further frustration came later when it was confirmed in a medical report that Barcelona loanee Nico González would be ruled out for some time as a result of a broken metatarsal.

Despite these shortcomings and regular injury setbacks, Valencia CF play some excellent football at times and the fans continue to buy into the manager’s footballing philosophy of playing out from the back.

This was much in evidence during the friendlies Valencia had during the World Cup. Matches against Clermont Foot 63 (won 4-2) Nottingham Forest (lost 1-2) and AZ Alkmaar (lost 1-3) showed just how much ability the team have, and in patches in all of the matches, some of the play was scintillating.

On the flip side, casual defending or individual mistakes rather than the industrious play of our counterparts led to the majority of goals scored against Valencia in these three games.

The results of the matches were academic in many ways, as wholesale changes took place in each game, but seven goals conceded in total is a worrisome statistic heading back into the La Liga campaign.

January also has the added distraction of the Spanish Super Cup for Valencia as they head to Saudi Arabia for a semi-final with Real Madrid. The four participants are made up of the two Copa finalists from 2022 (Valencia and Betis) and the teams that finish first and second in La Liga (Real Madrid and Barcelona).

Financially, it is a welcome boost and it also gives the club the chance of some silverware. However, the best chance of a trophy this season remains, once again, with the Copa Del Rey.

Valencia was given an interesting contest when they entered the draw by getting teamed up against CF La Nucia of La Comunitat Valenciana.

La Nucia is known as “The City of Sports” and have won international awards for its facilities and is a sporting complex that is the envy of many. Jonathan and Alistair Brownlee used the facilities to prepare for the Tokyo Olympics, and the World Padel tour held a tournament there recently.

The team itself is attempting a “Villarreal” and has impressively knocked out Hercules and UD Las Palmas (both on penalties) to reach the last 32 of the competition.

Starting for the hosts was Kevin Toner who had a few games for Aston Villa and is from a sporting family. His uncle Mark Dwyer was a leading jockey who won the Cheltenham Gold twice and his father spent some time with Mansfield Town.

Gattuso picked a strong side and Valencia made their intentions known by scoring through Kluivert after only three minutes. Ilaix Moriba and Hugo Duro added further goals to see Los Che comfortably through to the last 16 of the competition.

Just as Valencia finished their game, Levante UD started their Copa Del Rey match against Getafe CF in the Estadi Ciutat de València. Having come through games with UE Olot and FC Andorra in previous rounds, the club had aspirations to go deep in the competition, and to get a big name in the next round at least.

The hosts managed to pull off a bit of an upset, and will join Valencia in the draw… after beating the La Liga side Getafe.

Munir El Haddadi, who had a loan spell at Valencia, scored a brace for the visitors as Los Granotas went behind twice. First Postigo, and then Muñoz restored parity during the initial stages of the second period.

However, the drama did not stop there as Vicente Iborra received a red card for the home team as players from both sides began to lose control of their temper, as is often the way when the team from the South of Madrid are involved in a football match. By the end of the final whistle, six of the Getafe squad had yellow cards to their name.

In the league, Levante has played promotional rivals UD Las Palmas, Eibar and Alaves in recent weeks and did not lose to any of the three.

The pedigree to get back into La Liga at the first time of asking is definitely there, but January could very well be a defining month with matches against Gijon, Granada, Leganes and Burgos on the horizon.

Come out of those matches unscathed and Los Granotas will have one foot in the door of promotion at the first time of asking.