You are here: Home  /  Art  /  Art in Valencia…Exhibitions at Fundación Bancaja of Valencia
Art 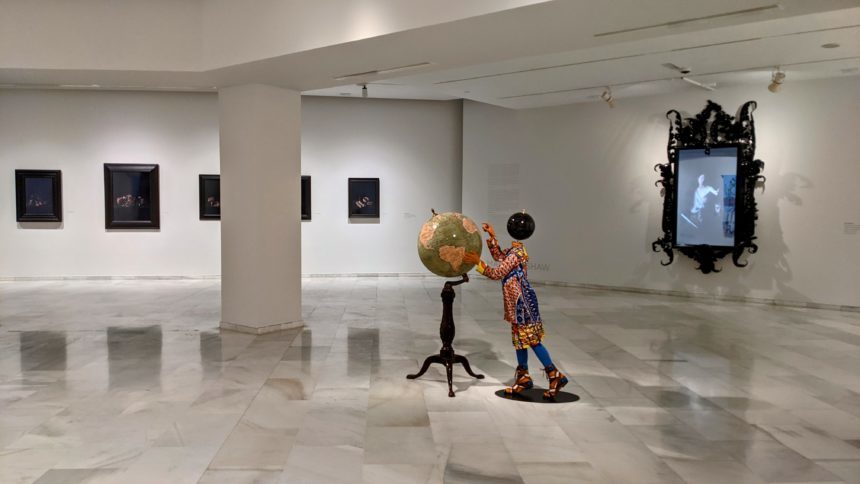 Art in Valencia…Exhibitions at Fundación Bancaja of Valencia

##The Centro Cultural Bancaja, which is part of the Fundación Bancaja, is located in the centre of Valencia, making it super easy to get to before or after a shopping spree in C/ Colon. Before you even step inside, the grand architecture of the main façade offers a striking welcome. The exterior of the building has been preserved in its original state since it was built the late 19th century, displaying an elegant design that incorporates monumental and classical ornamental elements. Just as the city is a vibrant tapestry weaved from the stylistic history of various cultures, the Fundación Bancaja building includes motifs from diverse origins, such as French architecture and Valencian traditionalism. The gallery is also decorated with giant banners advertising their latest exhibitions and a large metal geometric sculpture in front of the main entrance. You can’t miss it.

So, what are the exhibitions like? On behalf of ’24/7 Valencia’, I had the pleasure of visiting five of them throughout May and June: ‘London Calling, British art today from David Hockney to Idris Khan’; ‘Frances Bacon – Lucian Freud – De profundis’; ‘Goya in the Gaze of Picasso’; ‘Dalí, Lithographs of Pantagruélic Excesses’; and ‘Sorolla, Feminine plural’.

Francisco Goya and Pablo Picasso are also two internationally renowned Spanish artists, key figures in the transitional period between Romanticism and Modernism and known for their bold techniques that secured their positions in art history. This exhibition hinges on Picasso’s well-known fascination with Goya and explores the abundant evidence of inspiration between Picasso’s work and that of his predecessor. Notably, we see how Spanish culture is represented in the formation of these artists, for example in their mutual appreciation for bull-fighting. One section shows Picasso’s drawings that directly correlate to Goya’s, displayed side by side to contrast each artist’s own distinctive style.

The selection of over 250 works (mostly engravings, accompanied by sketches, paintings, photographs, and videos) is organized into four areas: Youth Look, which includes the early works by Picasso that were created after his discovery of Goya’s work in 1895 on a visit to the Prado Museum; The dream of reason produces monsters, where Goya’s late engravings are presented with the graphic work of Picasso from the early 1930s; Bullfighting as a festival, with many works exposing the passion for bullfights shared by both artists; and Goya in the texts of Picasso, where you can see the extent of Goya’s impact on Picasso’s work, as he references Goya not only in his paintings or drawings, but also throughout texts and poems written in the 1950s.

It is highly possible to spend quite a while in here, as I did, as you soak up the interesting analyses in the video projections. They include the 1956 film Le Mystère Picasso (The Mystery of Picasso); Guernica (1949), made by Robert J. Flaherty and commissioned by the Museum of Modern Art in New York; The Guernica Variations (2012), written and directed by Guillermo G. Peydró; a short film produced by Fundación Bancaja on Picasso’s Minotauromaquia engraving; and a video from the Goya Museum in which Goya’s life and work are reviewed.

In addition, there are photographs from the Reportage sur l’evolution de Guernica (1937), taken in Picasso’s studio in Paris by Dora Maar during the formation of the famous painting; and a report on the process of creating Picasso’s La Tauromaquia, made by David Douglas Duncan at La Californie in 1957. It is safe to say that you will come out of the exhibition having learned a thing or two about Picasso and Goya.

The works of the painters Francis Bacon and Lucien Freud are also stylistically akin to the motifs of Surrealism, Cubism, Abstract expressionism, linking them back to Picasso and Dali, amongst others. Fans of the ‘darker’ themes in art will thoroughly enjoy this show of introspection and internal strife.

The exhibition looks at the relationship between the two artists, and captures the emotional profundity of their individual works alongside a history of their lives and artistic practice. Again, there are interesting videos incorporated into the exhibition, including the interview-documentary, Francis Bacon and the Brutality of Fact (1985). (It is in this film that I first saw how chaotic Bacon’s studio was.) Curated by Belén Herrera Ottino, the exhibition analyses the characters of these Bacon and Freud (who established a friendship with respect and admiration) and highlights the parallels in their graphic work, as well as the aspects that set them apart.

The dimly lit room, rather than feeling flat and gloomy, is strangely inviting and exciting. The works (dated between 1975 and 1992 for Bacon and between 1982 and 2007 for Freud) are hung in a way that gives you a chance to fully immerse yourself in the experience of viewing them, so it is easy to get ‘sucked in’. Photographs and wall text provide information and offer a balancing break from the paintings that convey themes such as the loneliness of the human condition, the passage of time and its instability, internal anguish, confusion, or isolation. We see that both Freud and Bacon shared this morbid sensibility, but their friendship provides some warmth for viewers, as we know they were not truly alone. What’s fascinating is how their works are not plainly ‘sad’; both Bacon and Freud have captured and transcribed complex emotions into dynamic, intriguing, and visually rich compositions.

Coincidentally, the Fundación Bancaja is also showing an exhibition on artists formed in London, titled ‘London Calling’, so there really is a sense of bringing British Art to Valencia right now. Speaking to curators Maya Binkin and Javier Molins, they explained that the exhibition aims to give a broad introduction of contemporary British art to the Valencian public. I agree it is a wonderful selection of works by artists who accurately represent London’s art scene in the past decades.

The exhibition begins with David Hockney – a natural choice for his status as an important contributor to the Pop Art movement of the 1960s, and that he is considered one of the most influential British artists of the 20th century. The main body of the exhibition displays works by artists from the ‘Young British Artists’ group, such as Rachel Whiteread, Damien Hirst, Cornelia Parker, and Jake & Dinos Chapman. They rose to prominence from the London art schools during the 1990s and were integral to the revitalisation of and renewed interest in the British art scene.

Those who love the multi-dimensional experience of sculpture will be plenty pleased here, as there are several installations across the exhibition space from the likes of Tony Cragg, Antony Gormley, Phyllida Barlow, and Yinka Shonibare. Elsewhere, Grayson Perry and Julian Opie provide portraits of people in our modern world, for example in Grayson Perry’s exploration of identity, family, and what it means to be British in the 21st Century. Of course, it is hard to ignore the attractive allure of Anish Kapoor’s and Damien Hirst’s strikingly shiny and sparkly works. These artists are notorious for their luxurious and extravagant treatment of texture, light, surface, colour, and distorted forms.

For those who frequent art galleries in London, these artists will be familiar. However, it is great to see them brought together in Valencia, and there are new works to discover. The exhibition offers a slice of the social, political, cultural reflections that are continually created within the contemporary art world of London. It also includes recent pieces made within the pandemic, providing fresh and topical offerings from Michael Craig-Martin, Rachel Howard, Annie Morris, and Idris Khan. Overall, it is a varied multi-media show that includes sculptural works, installations, prints, collages, and paintings. So, there’s something for everyone.