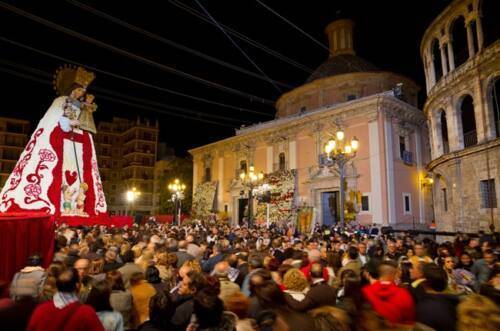 Daytime fireworks are a very Valencian contribution to the world of pyrotechnics. Forget about pretty pictures in the sky, this is all about noise, rhythm, the smell of gunpowder and having your bones thoroughly shaken by the ferocious aural assault of the finale. All this under blue spring skies, amongst a huge and expectant crowd in the Ayuntamiento as the excitement and tension builds while you await the opening salvoes. People love their loud bangs and air bombs round these parts. The pyrotechnician is loudly acclaimed and carried out on the shoulders of his fans at the end of a good show.

What a Fallero would say: A sublime musical symphony, a celebration of Valencian culture in fire and smoke.

What a Fallero would never say: Rhythm my arse. That was just a random load of loud bangs. And you’re telling me I’ve stood in this square for forty-five minutes next to those loons in the straw Amstel hats for this?

Insider knowledge: The Mascleta is best enjoyed after a few pre-bombardment beers and a plate of patatas bravas, but make sure you get into the square a good half an hour before it starts and get settled in somewhere near the post office building. There’s a great view from there and you can usually get out pretty quick when it’s all over.

Must see: Once you’ve seen the big one, try and see at least one mascleta at a barrio falla. Sat outside a bar with a beer, you can get closer, there are less people, and it feels just as ferocious and in some ways more authentic and, most importantly, you won’t be squashed up against those blokes in the Amstel hats.

Don’t bother: If you are running late, don’t bother going. Save it for another day. Mascletas are meant to be experienced close up. There’s nothing worse than hearing it from round the corner without seeing or feeling it in all its glory.

If you prefer your firework displays in the more traditional manner at night, you’ll see some of the best you’ve ever seen at Fallas (honestly). This being Valencia they’ll also no doubt be the noisiest. Valencia’s top firework bods are in demand all over the world. Valencians have been responsible for the fireworks at Olympic closing ceremonies and the World Cup final in South Africa. They compete with each other to produce the fastest, most original and loudest explosions of light and sound with huge multi-coloured asteroids lighting up the Alameda and the faces of the oohing and aahing crowds.

What a Fallero would say: What could be better than the fruits of the Valencian countryside, its palms and colourful flowers portrayed in the night sky of this majestic city?

What a Fallero would never say: Not those caterpillars on parachutes again! Boring! Where’s my gin and tonic?

Insider knowledge: Get yourself a good spot about half way down the Alameda on the Viveros side (the smoke always blows towards Avenida Aragon). Watch out for the unofficial firework wars in the riverbed before and after, they are not for the faint hearted,

Must see: Without doubt, the Nit del Foc.

Don’t bother: No half measures, it’s impossible just to pop over ten minutes before. It’s got to be part of your plan for the evening. There’s no point watching it half obscured by some building, if you are going to go, get there early and wait.

Valencia is especially famous for its rice dishes but it’s not that easy to get the best paella in Fallas. This is probably the worst time of year to eat in Valencia. Everywhere is packed out, prices go up, menus are reduced, quality goes down, the waiters and chefs are worn out. Buñuelos (basically deep fried doughnuts) stalls spring up all over the city where you can get the traditional Fallero breakfast of hot chocolate and “churros”.

As for drinking, Valencia has no shortage of night spots and in Fallas they are all full and lively. If you are really desperate for a beer, you are never far away from a bloke selling cans of Steinberg out of a shopping trolley.

What a Fallero would say: I’ve already eaten thanks, and anyway we’ve got a barbecue tonight at the Casal.

What a Fallero would never say: Have you been frying those doughnuts in the same oil all week?

Insider knowledge: Book yourself into a decent restaurant for at least one sit down meal. There are some excellent tapas bars around Valencia for example. You’ll need a break from all those bocadillos on the hoof. Somewhere off the main thoroughfares and squares is probably your best bet. The barrio of Ruzafa might be a good starting point.

Must see: If you get the chance, sign up for a paella competition at a Falla. Street party, good food, plenty to drink and guaranteed good fun, the paella is the least of it. As far as nightlife is concerned, you have to have at least few dodgy gin and lemons at a Verbena, that’s what it is all about after all.

Don’t bother: Avoid those tourist trap expensive menus in the centre. Don’t spend all night in a bar, get out on the streets and get involved.

The monuments are at the centre of the whole festival. Like huge three-dimensional saucy seaside postcards, their core purpose is to satirise life in the city or the neighbourhood, poking fun at politicians and celebrities in papier-mâché. There are more than 300 around the city, commissioned, and in some cases built, by the local neighbourhood fallas. They are divided into categories depending on how much money was spent on their construction. Monuments from the top division (Sección Especial) can cost up to 500,000 Euros.

What a fallero would say: A true combination of art and wit. The fallas artist is the modern day Michelangelo for the people.

What a fallero would never say: 500,000 euros just to burn it down after five days? Haven’t these guys heard about the recession?

Insider knowledge: Try and see the big fallas before the prizes are given to avoid the rush or go when everyone is doing something else, late at night, at lunch time or during a Castillo.

Must see: It’s always worth seeing the special section fallas. Perhaps the most interesting, however, are those which, with fewer resources, manage to create something more original and imaginative than just a duck coming out of a teapot.

Don’t bother: If you see a duck coming out of a teapot, steer well clear.

This floral tribute to the Virgin in her Valencian guise as the Virgin of the defenceless (popularly known as the little hunchback) started in the strict, Roman Catholic times of the 1950s and has become an integral part of the festival. Falleros parade proudly through the streets in “traditional” Valencia peasant costume with their offerings of flowers. These are often massive bouquets shaped into the form of the Migelete or the Mestalla football stadium, accompanied by marching brass bands. This is no grey procession of devotees…it’s all done in true over the top, Baroque Valencian style. Just because you are honouring the Virgin it doesn’t mean you are not going show off your best fancy dress and jewels or your new sunglasses and iPhone.

What a fallero would say: with tears in their eyes, “Valencians tots a una veu: Vixca la Mare de Deu!”

What a Fallero would never say: How come Valencian peasants used to dress up like Adam and the Ants?

Insider Knowledge: Get yourself outside a bar in the Plaza de la Reina and you can sit there watching it all go past. Our personal favourite is the grassy knoll outside Finnegan’s pub on St Patrick’s Day. As a bonus you might even also catch a few people in “traditional” Irish costume (a big Guinness hat and a green T-shirt).

Must See: The flower arrangements by night in the Plaza de la Virgen once the ofrenda has finished.

Don’t Bother: Don’t try to get around too much in the centre of the city while the ofrenda is on. The old ladies don’t like you crossing over while the Falleros are marching past.

This is where the party ends but without the flames of the Crema the festival means nothing. It is a symbol of purification, the burning away of all the bad spirits of winter, clearing the way for the coming of spring. In previous centuries fallas (made of old furniture and junk) were a great way of getting rid of all your old rubbish.

With explosions and flames and firemen all over the city centre, the Crema feels like the nearest thing you can get to being in an air raid without actually being in a war. The experience of running around with the city in flames will stay with you when the rest of fallas are a distant memory.

What a fallero would say: What day does Fallas fall on next year?

What a fallero would never say: I shudder to think what effect all this smoke is having on the environment.

Insider Knowledge: Don’t have a fixed plan. Be prepared to keep on the move. The burnings in each neighbourhood are staggered. Follow the firemen around to see as many as possible.

Must See: Try and see at least one big Falla burn, but if you can get to see a smaller one in a narrow street you’ll really get the feel of it.

Don’t Bother: Don’t wait for hours in the Plaza del Ayuntamiento to see the big Falla burn and, in the process, miss everything else that is going on around you.