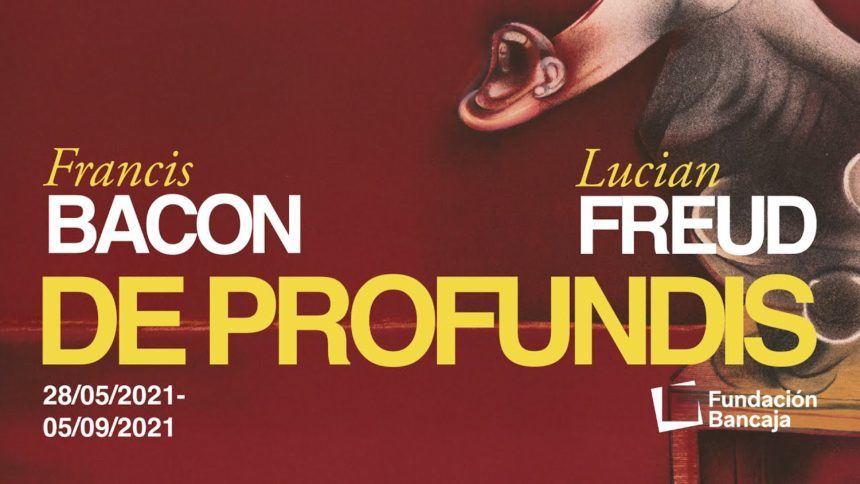 ##The exhibition covers the graphic work of both artists and focuses on the attitude and themes with which each of them approached this facet of their art.

The exhibition, which can be seen until September 5, reveals in a tour of fifty pieces the ideology and creative universe of these two key figures of the twentieth century.

The exhibition ‘Francis Bacon – Lucian Freud. De profundis’ is an exhibition that offers a journey through the graphic work of both artists and focuses on what attitude and what themes each of them dedicated to this facet of their artistic work. The presentation was attended by the president of the Bancaja Foundation, Rafael Alcón, and the curator of the exhibition, Belén Herrera Ottino.

This exhibition, which can be visited until September 5, analyzes the characteristics of these two artists -who were also friends- and establishes points in common in their graphic work, as well as genuine aspects in each of them. An approach that is made through a tour around fifty pieces that showcase the ideology and creative universe of these two key figures of the 20th century and that come from the Marlborough Gallery and private collectors, in addition to the reproduction of photographs and the screening of the documentary Francis Bacon and the Brutality of Fact (1985), directed by Michael Blackwood.

Francis Bacon based his graphic works on a selection of thirty-six of his paintings dated from 1965 to 1991. He worked with the best French, Italian and Spanish printers. The graphic work (aquatints, lithographs and offsets) was always produced under his careful supervision, making the changes he considered necessary on the proofs that he finally approved for his limited edition, which he subsequently numbered and signed. The result are works loaded with multiple layers of meaning, full of iconographic, literary and intellectual references, in which his particular plastic language centered on the human figure is represented.

For Freud, engraving is an intimate and autobiographical format, which allows him to reflect his feelings and experiences, and in which he achieves a synthesis of the essential and a high psychological intensity that surrounds the characters. His work process and the techniques he uses in printmaking mark a parallelism with his painting. Freud approached engraving in the same way as if it were a canvas: placing the copper plates on the easel in a vertical position to work by drawing directly with the burin.

On the occasion of the exhibition, a catalogue has been published with reproductions of the works accompanied by texts by the curator. In addition, as part of the cultural mediation programme, there will be guided tours.

MORE ABOUT THE CONTENTS OF THE EXHIBITION

Bacon and Freud met in 1945 through another great painter, Graham Sutherland (1903 – 1980). Francis Bacon made Lucian Freud a contemporary artist, as can be seen in the feelings and emotions present in Freud’s brushwork that were already characteristic of Bacon’s work. Freud said of Bacon: “the most intelligent and wildest human being”. Bacon, of Freud: “the problem with Lucian Freud’s work is that it is realistic without being real”. They shared a vision, but they also had their own personal and non-transferable stamp. While Francis Bacon used multiple photographs to create his portraits and needed a distance from the subject, Lucian Freud needed the presence of the model during a continuous series of sessions.

Francis Bacon avoided explanatory discourses and only sought to provoke sensations, to get the viewer’s reactions. In his works he used an apparently banal subject as a vehicle for the deepest reflections on life and death. His bodies have an animality that transcends the forms and an evocation of the organic from the most primal needs to the most sublime passions. His knowledge of the great masters such as Picasso, Goya and Velázquez is also evident in his work. An example is his Second Version of the Triptych 1944 (1989), which is on display in this exhibition. In the three lithographs of this crucifixion, we find Picasso’s paintings made at the end of the 1920s, with organic forms that suggest at the same time human images but in absolute distortion.

The etchings by Lucian Freud selected for this exhibition show his characteristic emotional tension. Some of the usual themes can also be seen in his canvases: nudes, penetrating portraits of friends and family, also of Pluto – his beloved dog almost to the end of his life -, self-portraits (he painted more than a hundred self-portraits during seven decades, from the age of 14 until he was 86) and scenes of solitude. His eye as a sculptor is evident in his canvases and engravings. Freud traces the orography of bodies and molds them with brushstrokes in his paintings or with incessant and intense lines with the burin to achieve an insolent carnality. In most of Freud’s graphic works, everything unnecessary is eliminated, leaving little or no colour and a minimal background that allows for an extremely pure appreciation of his style. As in his paintings, the models of his engravings were people close to him, but often anonymous to the viewer on whom, in long posing sessions, Freud casts an uncompromising gaze resulting in works full of honesty, bearing psychological portraits.

Francis Bacon (1909 -1992) is one of the most singular figurative painters of those who developed his artistic career during the post-war period. He is famous for the creation of his own style, full of images charged with emotion, rawness and violence, reflecting the general mood of a convulsive historical period.

Born in Dublin (Ireland) into an English family, Bacon never received formal artistic training. He gained instant recognition in 1945 after an exhibition at the Lefevre Gallery in London that included his triptych Three Studies for Figures at the Base of a Crucifixion (1944), sealing his reputation as a key chronicler of the human condition in the postwar period. Always far more concerned with emotion than representation, Bacon works the figures as fleshy, distorted, violently expressive, gaping-jawed masses, an accumulation of grotesque and shocking iconography that simultaneously provokes rejection and intrigues the viewer in equal measure. This paradox, this magnetic and distressing character of Bacon’s work, is present in his graphic work.

Lucian Freud (1922-2011), son of the Jewish architect Ernst L. Freud and grandson of Sigmund Freud – father of psychoanalysis – is considered one of the leading figurative portraitists of the 20th century. Freud developed a style faithful to reality, but through a filter of rawness, never pandering to the viewer, without any concession to decorativism. He was born in Berlin, but while still a child, in 1933, his family and he were forced to leave Germany by Nazism and settle in England, where Freud lived and developed his artistic career until his death in 2011. Although artistic recognition, especially in the British sphere, came to him in the 1950s, it was in the 1980s when he began to enjoy undisputed international critical acclaim following a major retrospective exhibition held at the Hirshhorn Museum in Washington that later toured to other international institutions. In 2008, his painting Benefits Supervisor Resting, auctioned at Christie’s, became the most expensive work ever sold at auction by a living artist.

He created his first engravings in Paris in 1946, and his graphic work forms an essential part of his artistic corpus. The marks and techniques he employed during the printmaking process represent a natural progression as a draftsman.