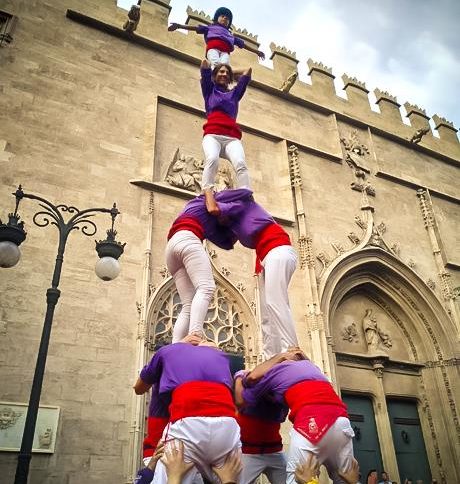 ##24/7 VALENCIA: Could you tell us more about your latest exhibition?

L’ETNO: “The construction of human figures and towers in the context of the festival is one of our most emblematic expressions. Representations that today we identify as ‘muixerangues’ and that in other places are known as ‘Ball de valencians’.

A phenomenon that has its maximum expression in Algemesí (in fact it is Intangible Heritage of Humanity) but which is a widespread tradition in our territory (even documented in the Cap i Casal) that, although it was diminishing from the festive landscape, it was preserved and reborn in other municipalities in which today we see traditional muixerangues as part of the ritual of the festivities.

Although each of these muixerangues has its own particularities and different names (muixeranga, negrets, moixiganga, dansants and varetes), all these festive groups share the essential aspects that identify them: burlesque dancing, specific music and costumes and, of course, making towers.

For some time now, we have been experiencing an interesting phenomenon of recovery: the creation of new muixerangues “collas” which, with contemporary forms of associationism, have found a model to follow in the traditional muixerangues.

A tradition that expands and, inevitably, changes, renews and updates itself and where women participate, at last, on an equal footing. Now more than ever, we realise its value as a cultural and festive heritage.

The exhibition has been produced by L’ETNO. Museu Valencià d’Etnologia in collaboration with Federación Coordinadora de Muixerangues and is curated by Joan Bofarull and Albert Costa, curator of L’ETNO.

The exhibition aims to bring the spectator closer to this multifaceted phenomenon that brings together tradition, new forms of association, festivity, ritual and, why not say it, a way of understanding the identity of the Valencians. The aim is also to generate a didactic discourse on the codes and intentions behind the construction of the figures and human towers of the muixerangues.

Dressed in brightly coloured uniforms, they will display their skills in search of the public’s approval. Illusion, effort, suffering, nerves and joy that will end up becoming the protagonist of the festival.”