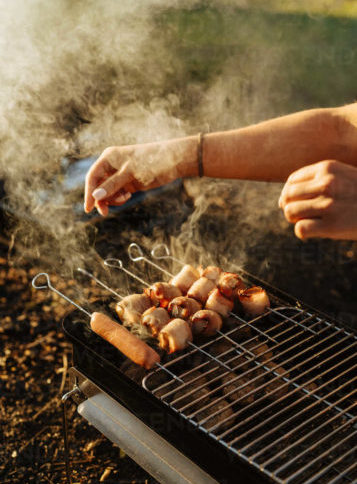 ##The days are long, the balmy nights are here, I love Valencia! Sitting outside in the warm evenings, relishing little plates of food and sipping cool red wine. It is a food and drink lover’s paradise, as though the whole country were made purely for the pursuit of epicurean pleasure: eating, drinking, and spending time with friends and family.

So, now that the weather is warm and we can savour the long evenings again, I swear the air smells like watermelon, it’s time to kick back with some barbeque flavors and lush salads. I adapted this recipe from one that I found in a summer issue of Bon Appétit; so if you’re chasing that elusive summer flavour, or are lucky enough to have a grill, fire it up!

In a high-sided pan, over med-high heat, fry bacon and chilli flakes until crisp, about 10mins. Add chopped onion and garlic to the pan and stir over medium heat, until translucent, a further 8-10mins.

To the pan, add the Worcestershire sauce and a generous grind of black pepper and cook for about 1min. Then add your chopped mango and sauté for a few minutes, until tender.

Next add the orange juice, ketchup, lemon juice, and hot sauce. Simmer, over medium-low heat until the sauce has thickened, about 30mins. It should coat the back of a spoon when you dip it in. For a chunky-style sauce, gently pulse in a blender, or with a hand blender to your desired consistency. For a more refined sauce, strain into another bowl and disregard what’s left in the strainer.

Rub pork tenderloin, ribs, or chops with a little olive oil, sea salt and fresh ground pepper. Then baste the meat with a little of the BBQ sauce, and grill, broil, or roast them. Baste the meat again near to the end of cooking time to glaze it. Reserve most of the sauce for serving on the side with the cooked meat. The sauce will keep for up to a week in the fridge, alternatively, you can freeze it for up to 2 months.

This recipe is also great with peaches instead of mangoes. Use whichever are fresh and in season. Serve the BBQ meat with a salad of your choice, and potato wedges if you can’t deal without the carbs!

Anyone who is somewhat of a regular at the market will notice that the strawberries are back. So for all you daiquiri lovers out there, get into the market and grab some of those ruby red beauties! Freeze a bunch of them for defrosting later and whizzing in the blender with some lime and white rum. Nothing like a few frozen strawberry daiquiris in the sunshine!