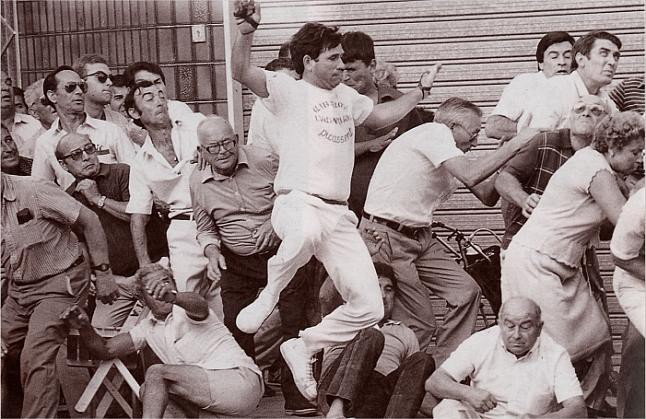 ##Pilota valenciana is one of a handful of variations of the ancient sport of pelota or handball scattered around Europe. Like pelota vasca or Eton fives it’s basically tennis without rackets…but to some it’s also as much a clear expression of Valencia and Valencianism as paella, fireworks and horchata.

The Valencian style of the sport is only played within the region and is especially popular in the small towns and villages. Wherever you go in the Valencia community you will find a trinquet (a purpose-built pilota court) or pilotaris (pilota players) who play in the street.

Pilota valenciana is played under five different disciplines, each with its own set of rules and all of which involve the hitting of a small ball with the hand in order to score points. There are varying numbers of players, sizes of courts and the use or not of a net or returning wall.

The origins of the sport can be traced back to a game played by the Romans and ancient Greeks. Alexander the Great was a regular player as were various Roman emperors, and it was the Romans who laid down the first official rules and created the first federations. The sport survived the fall of the Roman Empire and became one of the favourite pastimes of the upper-classes during the period of Gothic rule in Valencia, second only to hitting each other over the head with a mace.

Although pilota almost died out during Moorish rule, it became popular again after the reconquest.

The Aragon crown were great promoters of the game and letters dating back to 1305 (which are exhibited in the San Miguel de los Reyes library in Valencia) show how King Jamie II’s doctor, Arnau de Vilanova, recommended that the king play the game twice a week “to preserve his health and fine figure”. In Valencia, the great aristocratic families such as the Borgia, the Centelles and the Vilarraguts started to establish closed areas where the game could be played which were called trinquets. From the Tenth until the Eighteenth century, when the English school system started to churn out new sports and federations by the year, pilota (and its variations) was the most popular sport in Europe that didn’t involve something or somebody getting killed.

It was the spread of these new English games and the French Revolution (the playing of pilota was banned throughout France after it) which virtually killed off the sport in most of Europe. However just like that village under the magnifying glass in Asterix books, there were a few pockets of the old continent which held out against the all-conquering invasion of, principally, football and tennis. Amongst them was Valencia along with the Basque country, parts of Belgium and Holland, and northern Italy, each one with their own variation on the sport.

The rules of modern pilota valenciana and the definition of its different disciplines were established in the nineteenth century. The famous Trinquet de Pelayo, the only trinquet remaining in the centre of Valencia (at C/Pelayo,6), was completed in 1868. Known as the Cathedral of Pilota, championship finals and international matches are played here in front of a fanatical and knowledgable crowd of up to 1,000 spectators. You can see top class professional matches across the different styles at the Pelayo Trinquet every Saturday afternoon and amateur and junior matches every Thursday. After the summer break, matches will start again in September 2021.

The Federación de Pelota Valenciana was set up in 1940 after the Civil War. The appointment of José Marín, a founder member and ex-player of the Valencia football club (rather than an ex-pilotari), and a man favourable to the new Francoist regime was not an immediately popular choice as the federation’s first president. Under his 25-year-presidency, however, he managed to preserve and even enhance all the essentially Valencian elements of the game (such as keeping the score in valenciano) and the sport’s position as a symbol of Valencia regional identity. This was at a time when other such symbols like Las Fallas, regional flags and the Corpus Christi parades were being suppressed or diluted by the dictatorship. His love of being photographed at every opportunity with any popular player or at any important event has also left us with an extensive photographic history of players and trinquets throughout the Valencia region. Believe it or not, he was the grandfather of ‘24/7 Valencia’ writer José Marín!

In the modern era the game remains as popular as ever in the towns and villages. Although most pelotaris are amateurs; including everything from farm workers to shopkeepers, there is a professional league and the game has produced its superstars. The greatest of them all was Paco Cabanes, ‘‘El Genovés’’, from the village near Xativa of the same name. Between 1975 and 1996, El Genovés won every major tournament in every discipline of pilota at every level along with every possible international trophy. In exhibition matches he routinely played on his own against, and beat, a team of three other international players. He once famously won an exhibition match while carrying a chair in his non-playing hand. Other famous players have been Sarasol, from the same village as El Genovés, and El Zurdo, Melero and El Nene.

The number of professional players is growing by the year and the local government has pushed for the sport to be taught in state schools. The Polytechnic has new modern training facilities and a trinquet was built in Benidorm, who were league champions in the past. Pilota has also gone international with a hybrid five-nation tournament between Belgium, Holland, Italy, the Basque country and Valencia which el Genovés, of course, won twice.’Campionats Internacionals de Pilota’ are international tournaments and ‘País Valencià’ has won titles, competing against entire countries.

So, the future of Pilota Valenciana is ensured? Well… perhaps or perhaps not. After retiring as a player, the late ‘El Genovés’ went public with his concerns and disappointment that the sport had not received the support and sponsorship it deserves from local government and business. Most Valencians will tell you that Pilota must be kept alive and will show their unconditional support for the regional sport but very few, especially in the city, actually bother to attend any matches…especially if there’s football on the telly.