You are here: Home  /  Sports  /  VALENCIA FOOTBALL…READY FOR LA LIGA TO START
Sports 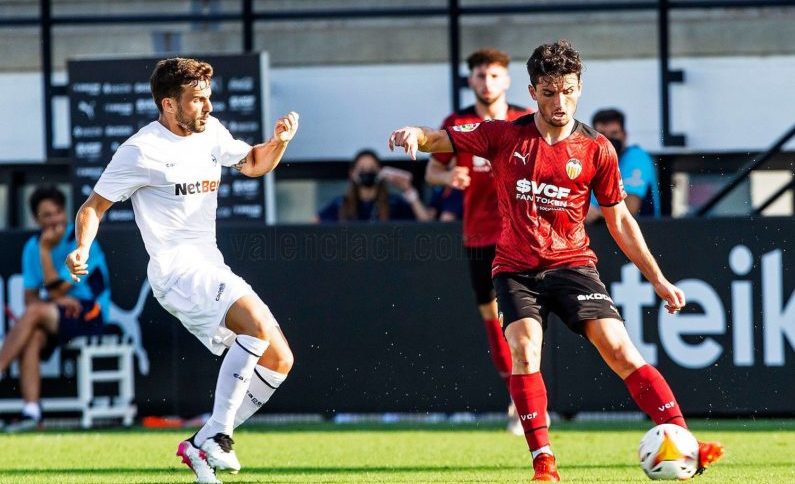 ##Valencia have continued to progress through their pre-season workouts to good effect, and things are shaping up nicely for the new manager José Bordalás, as he looks to decide on his starting line-up for game one in La Liga.

The Alicante-born coach tasted victory in his very first game in charge recently, after Los Che came from two goals down to win 3-2 in Oliva Nova, against the Europa League champions Villarreal. Manu Vallejo scored a brace, and a Cheryshev winner in injury time overturned the two goal deficit in the game played behind closed doors.

Valencia’s next test was Atromitos of Athens, who had decided on a Spanish tour prior to the start of the Greek season to gain their fitness.

With Spaniard Ángel López Pérez appointed their coach as recently as May, it was a logical choice. Elche, Valencia, Getafe, Levante and Real Zaragoza all provided strong opposition during their two week stay on the mainland.

The match up against Atromitos F.C. was in the Antonio Puchades stadium and the hosts won 3-0. Donning their new red away kit for the match, Valencia were two goals to the good after twenty minutes.

First Manu Vallejo tapped in from close range to open the scoring. Initially, Diego Lopez beat the Greek goalkeeper to the ball from a cross at the near post by Thierry Correia. The interception by the young academy star left Theodorakis out of position and scrambling to get back to his goal line.

The youngster then fired a quick cross across the face of the goal that left the goalkeeper in no man’s land and gave Vallejo the simple task of slotting home from two yards out.

The keeper was also partially at fault for the second goal when his poor clearance finally found Jason on the right hand side of the pitch. He cut inside and unleashed a low skidding shot, from outside the area with his left foot, that evaded the reach of Theodorakis to extend the lead.

Jason was with Bordalás at Getafe for a time and he certainly seems to have been given a new lease of life and more opportunities to establish a future for himself at the Mestalla.

Half-time brought a ring of changes and the introduction of Gonçalo Guedes. Speculation has been rife that he will be leaving Valencia, but to date he remains at the club, and the third goal of the game confirmed once more what a talent he is.

Combining not once but twice with Cheryshev, he blasted home with his right foot to end a lovely move that the pair contrived from within their own half. The game fizzled out towards the end with the hosts comfortable victors. The only worry from the contest was the sight of Yunus Musah hobbling off just before half time to be replaced by the youngster Adrián Gómez.

Three days later, Valencia entertained Cartagena at the Ciudad Deportiva de Paterna. The club from the region of Murca finished 16th in La Liga Smartbank last season and proved to be a stern test for Valencia.

The visitors took the lead just after half-time but Valencia responded strongly, and bagged three goals within a short period of play. The equaliser came in the 56th minute under farcical circumstances.

A Cartagena defender tried to clear a Jason cross. He put his laces through the ball but it hit Guedes full on who was standing only yards away. The richochet fell right into the path of Manu Vallejo, who was left with the simple task of placing the ball past the keeper.

The second goal came from a training ground routine. A near post corner was met by the new signing Alderete. The Paraguayan glanced his header into the far corner of the net unchallenged to give Valencia the lead.

A minute later, the home side received a penalty when Hugo Guillamon was bundled to the ground when there seemed no apparent danger. Jason converted the penalty with ease, suggesting he could be another option for taking spot kicks in future matches.

Cartagena did claw a goal back late in the game, but Valencia were good value for the victory, making it three wins from three.

The only blot on the copy book for Bordalás to date came in the next friendly against Zaragoza. Valencia went down 2-0 at the Pinatar Arena.

Maxi Gomez and José Luis Gayà had some playing time for Valencia which was a plus. However, the best performance came from goalkeeper Cristian Rivero who kept Los Che in the game with a string of good saves.

The Gandia born stopper impressed and with four top keepers vying for the number one spot, something will have to give. Cillensen is likely to start the league campaign as number one with Domenech, Rivero and the Georgian youngster Giorgi Mamardashvili all in the mix for the back-up slot.

Valencia got back to winning ways again in their fifth friendly by edging out Levante UD in a hard fought derby. The difference between the teams was a headed goal from Alderete late in the second period.

His aerial prowess has already resulted in two goals during pre-season and this will undoubtedly be a ploy in the league from set piece plays.

Valencia have two more games before their first league match at home to Getafe. A C Milan will once again grace the Mestalla for the annual Trofeo Naranja on the 4th August.

Three days later Los Che have their only friendly on foreign soil, when they go to the Brentford Community Stadium to take on the newly promoted Londoners.

It remains to be seen if the Danish international Daniel Wass will still be at the club by then. The versatile player has expressed an interest to leave and various clubs are considering pouncing for the former Celta Vigo player who starred for Denmark in the Euros this summer.

One player who has moved for the season is Jorge Sáenz, who will turn out on loan for C S Maritimo in the Portuguese premier league next year.

One rumour filtering out through social media is that Leeds are willing to let Rodrigo leave and that Valencia are keen to sign their former international forward.

Another international striker who has returned to the city of Valencia is Roberto Soldado. He made the perfect start for his new club Levante when he scored in the first minute of the club’s friendly against the French team Rennes at Pinatar Arena. Levante won the game 3-1 and then followed up with a 2-1 victory over Atromitos a few days after Valencia had played the Greeks.
A goalless stalemate with Villarreal and the single goal defeat to Valencia have been the other Levante UD friendlies to date.

Southampton at Saint Mary’s in Hampshire and then two games on consecutive days against Alaves and Elche at the Pinatar Arena and Estadio Valero are the remaining pre-season fixtures before they start their campaign with a tough looking contest with Cadiz in Southern Spain.

Both clubs in the city of Valencia will be hoping to improve on last season’s performances. Valencia are seriously limiting spectators at the Mestalla, at least until January. Season tickets are being priced from the Sevilla home match (game 21 of La Liga) and any matches before that will only be available on a match-by-match basis.

Levante on the other hand already have 15,000 season tickets confirmed and fans will be bursting to see a game at the ‘Estadio Ciudad de Valencia’ under its new covered roof.

For the first half of the season we are likely to be faced with the unlikely situation of Levante having more fans at their games than Valencia. What effect, if any, it will have on either team’s performance will be clear to see by the end of 2021.