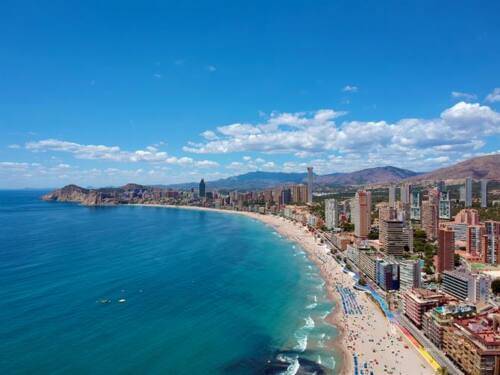 ##Summer is coming and people from all over Europe and the rest of Spain flock to the Valencia coast. Towns like Cullera, Gandía, Calpe and Dénia increase their populations tenfold in the Summer months. Valencia prides itself on its wealth of history, architecture and art. In reality, it is sun & sea & sand that is the formula that has worked magic for nearly a century. This is what really brings the punters in. Nowhere is this truer than in the jewel in the Valencia coastal crown, Benidorm.

Benidorm is a tourist industry phenomenon on a world scale. It accounts, on its own, for more than 50 % of all annual tourism to the Valencia community. It receives 5 million visitors every year and fills more Hotel rooms than any other town or city in the whole of Europe with the exception of London and Paris. Formerly a tiny Moorish settlement, it was colonised after the re-conquest by Christians under James I the Conqueror. In 1325, Admiral Bernat de Sarria established it as a Christian stronghold and the place first became known as the town of  Benidorm, justifying it as a charter to remove Moors from the area and for the town to be repopulated by Christians.

He built a castle on the peninsular and a small community developed around the castle. It survived centuries of occupations and attacks by pirates but the population never rose above 3,000. That situation changed at the beginning of the twentieth century when the moustachioed and stripy swim-suited Alicante and Madrid upper-classes started to arrive on the recently completed Madrid to Alicante and Alicante to Altea railway links.

In 1925, the first seaside chalets were built along its beautiful beaches. By 1950, the population had increased to nearly 7,000. Most of the new arrivals were working in newly built hotels and guest houses. Had it not been for the vision of one remarkable man, Benidorm may well have stopped there by happily living out its days as a kind of sunnier version of Skegness or Bognor Regis with a relatively small but regular stream of mostly local visitors.

Pedro Zaragoza was appointed (not elected, Spain didn’t go in for elections much in those days) Mayor of Benidorm in 1950.  Now considered by many economists and town planners as a true visionary, Pedro came to power at a time when foreign visitors were starting to arrive to the Valencia coast. More than anyone at the time, he saw the potential in this. He realised that a town could be built and economically developed purely based on the popularity of its beaches. In 1956, he drew up Spain’s first General Urban Organisation Plan in which he envisioned a town constructed entirely and solely with the aim of promoting tourism with wide avenues and tall buildings so “everyone will have a view of the sea”. Many have copied but Pedro got in there first. He set about promoting the name of Benidorm all around Spain and Europe in any way he could (most famously the wonderfully awful Benidorm International Song Festival) and creating an affordable place where, in his words, “people who never saw the sea in their everyday lives could spend a week or two next to the Mediterranean”. At the same time he would also, of course, create a huge money-making machine.

One illustration of the lengths Pedro would go to in order to defend his dream (and his and his business friend’s bank accounts) is what has become known as “The Bikini Wars”. Back in the late fifties and sixties (mostly foreign) women started to wear Bikinis on Valencia’s beaches. This, in Catholic Spain, was extremely frowned upon and the garment was reluctantly tolerated for swimming in the sea but banned everywhere else. Pedro Zaragoza was highly critical of the ban and after threats of excommunication by the Bishop of Valencia and an incident where a British woman was fined 40,000 pesetas (a huge sum back in 1958) for wearing a bikini in a bar, he set off on his Vespa on a six hour journey to Madrid to take the issue to a higher power. In Madrid, he somehow managed to get an audience with Franco. I don’t know if either Pedro or the General tried on a Bikini during the meeting but Franco ended the ban and they became lifelong associates.

Throughout the sixties, seventies and eighties and on to the present day, tourists came by the bucketload and the population increased to 50,000 permanent residents and 400,000 visitors at any given time during the summer months. A whole generation of Northern Europeans when asked about Spain would identify Benidorm before Valencia, Madrid or Barcelona. When explaining where Valencia is, it’s  often easier to say “it’s just up the coast from Benidorm”. Guadalest, a pleasant but largely uninteresting little medieval town, has become the second most visited historical site in Spain (after the Alhambra) solely by virtue of being an easy day trip away from Benidorm.

Part of Pedro’s legacy is the “little Manhattan” of skyscrapers that crowd the bay in the shade of the Puig Campana Mountain. The mountain’s strange shape is explained by one local legend claiming that a large piece was cut out by a giant, called Roldan, and thrown into the sea to form the island which decorates the bay. There are easily more 100-metre-plus buildings (including the 186 metre high Gran Hotel Bali which until 2008 was the tallest building in Spain) concentrated here than anywhere else in the country all surrounding what Hispanist Ian Gibson described as Spain’s best beaches, Levante and  Poniente.

It’s this huge development, however, which has been the sour aftertaste of Pedro Zaragoza’s dream. Only a few places along the Valencian coast have been left untouched with apartments on every hillside and tower blocks rising above every beach and ‘Cala’.

The coast is littered with red-faced, tattooed, short-haired men drinking bitter outside bars with photograph menus advertising beans on toast with “normal” bread. Now with the crunch, many developers have scarpered leaving unfinished constructions and leaving people’s dreams shattered. The cost to the countryside and the environment is obvious. However, without tourism Valencia would be bereft of the true driving force of its economy and millions of working people all over Europe would not have been able to live Pedro’s dream of a few weeks of fun and sun by the sea.