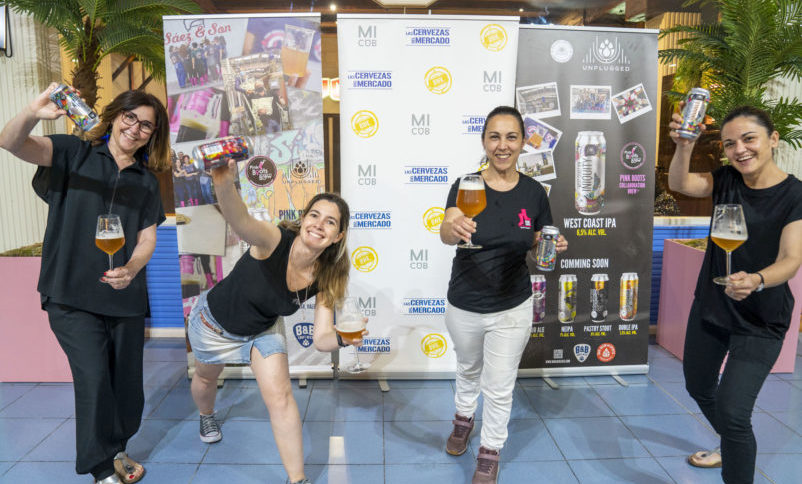 ##Bierwinkel Experience is born in Valencia as the first pink brewery in Spain. Created by SINMAS, it has been inaugurated launching the collaborative beer Iniquity, brewed by women brewers, las Pink Boots, led by master brewer Cristina Sáez from Birra & Blues…with beers and a brewery full of hops, creativity, initiative and empowerment.

Christian Jardel, with his 30 years of experience as CEO of the Spanish-Belgian distributor Bierwinkel, thought of creating an unusual terrace for the very brewers and trusted two Valencian interior designers, Sigfrido Serra and Mateo Climent, from SINMAS studio, to create the first brewery with a striking, futuristic character and where the colour pink is the protagonist. Farewell to Irish-style wooden bars.

“What I asked myself is why breweries had to be all the same and I thought that we should not put limits to creativity and we could break stereotypes,” explains Jardel who adds: “So I decided on a different model in which the very brewers and those who are not could enjoy, in a relaxed and very careful environment”. Bierwinkel Experience is born with a vocation for expansion and continuity. Heron City in Paterna is the place chosen for the first location.

Opening a space like this could not be done with just any beer. So Bierwinkel, which distributes Birra&Blues since, moved by the passion for real beer and good music, decided to brew craft beer in 2011 and being the factory chosen this year by the group Pink Boots Society, to produce an authentic craft beer made only by women, the occasion was painted in a unique colour.

The ‘West Coast Ipa’ is named ‘Iniquity’ in honor of Lauryn Hill and her unplugged recorded in July 2001 in New York. It is a collaborative beer, brewed as part of Collaboration Brew Day with Pink Boots Society. This non-profit association brings together women working in the beer industry and on the occasion of International Women’s Day they brew collaborative beers all over the world. This year in Spain, three collaborative beers have been brewed with three breweries, but B&B is the only brewery in Spain to use the Association’s blend (hops), which makes them a double sponsor, for the purchase of hops and because a percentage of the sales of this reference will go to the association to sponsor training scholarships for women brewers.

For Cristina Sáez, Lead Brewer and Product Manager of Brew and Spirits and member of Pink Boots Society Spain, “brewing this West Coast Ipa together with other brewers has been a luxury, as always, and the result is a very good craft beer. Iniquity is the first of a range we have called Unplugged, which is made up of five different styles, each one paying homage to an artist and their live MTV performance”.

For all those who come to Bierwinkel Experience, according to its creators, they will achieve intimate environments through small areas with separators because, as Mateo Climent explains: “We use structures that create volumes in the space and help to privatize areas”. For Sigfrido Serra: “The distribution is designed for individual use spaces that give the user privacy, comfort and security in the times we live in”. The division into two large areas, a seating area with low seating and a dining area with chairs and tables, rounds off this idea.

In 2002 Bierwinkel created its own Finest Beers Selection, joining forces, know-how and guarantees of expansion with the Belgian brewery John Martin, SA. In 2010, the German brewery Dinkelacker, Sanwald and the Belgian breweries Huyghe, Bosteels and Belgoo Beer joined the company, a few years later the breweries Het Anker and Chimay with the aim of consolidating and expanding this unique and select Joint Venture brewery for Spain. Likewise, they work intensively in the introduction and commercialization of craft beers from the Valencian Community. A good example has been the development and implementation in the last year of the Valencian Craft Beer concept.