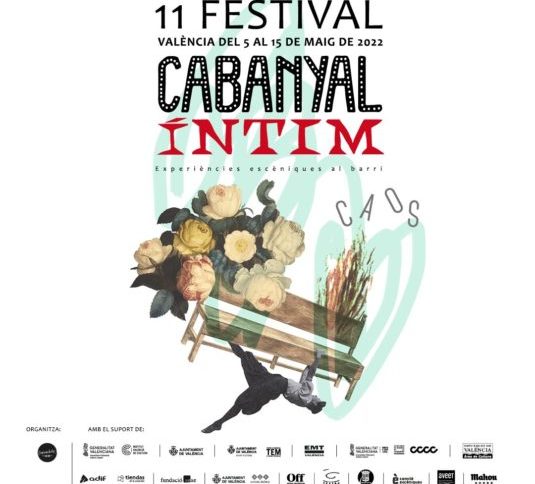 The ‘Cabanyal Íntim’ Festival unfurled its sails yesterday evening at the ‘Centro del Carmen de Cultura Contemporánea’ with a party at which it unveiled the new features and the image of the poster for its 11th edition, scheduled from 5 to 15 May under the slogan Chaos. All this in a playful atmosphere in which the word gave way to dance with the performance of the company [Re] Voltes, to enjoy afterwards the concert, created especially for the occasion, by a new promise of Valencian music, Luna Valle.

The plastic artist Po Poy, from Alicante, has been commissioned this year to put a face to chaos, the thematic umbrella that will house the entire programme of Cabanyal Íntim. “For the festival poster, I have worked on the basis of my own definition of chaos, put together as a collage of definitions”, explains this enthusiast of play, poet and esparto grass craftswoman, who conceives chaos as a “state of disorder, notorious or perfectly subtle, propitious for new approaches and valuable transformations”. Po Poy is still committed to the brief format in her creations: “As I believe more and more in brevity through condensation, I understand that this sums up everything I have been working on in this poster”. The rest, “the unsaid and the unshown, is the necessary space for suggestion”, concludes the artist.

This spring, the festival will present a scenic and performative journey through some thirty proposals that have been selected from among more than 150 pieces submitted to the event, its director Isabel Caballero revealed yesterday. The proposals are divided into short and long pieces, ‘Íntims familiars’ and ‘Íntims a la nit’, which will take place in unconventional spaces in the neighbourhood. The Territori Performance experimental encounter reaches its seventh edition this year and will land, as usual, in the bowels of the Teatre El Musical with 6 proposals.

A strong female presence and a commitment to young people

This year’s stage offer, remarked Caballero, “is marked by the strong presence of women as creators and directors of the works we present, as well as the prominence of new dramaturgies”. An absolute novelty of this edition, she pointed out, is the new space Joves Íntims Experimenten, “in which we wanted to give impetus, support and visibility to those emerging companies full of ideas and talent that will undoubtedly surprise us with their innovative projects”.

In addition to the official programme, tickets for which go on sale online on 5 April at the cabanyalintim.com website, the festival will invigorate the neighbourhood with a series of activities that will serve as a place for reflection and a meeting point for people to come together. An offer that will range from playwriting workshops, book presentations, walks through the neighbourhood, participatory itinerant dance tours and a special tribute to the Valencian painter and poster artist Josep Renau with a series of talks.

The music and the magnetic staging of the very young Luna Valle (Valencia, 2003) yesterday put the musical icing on the cake for this pre-celebration of the festival’s eleventh anniversary. The artist, who has released four singles and plans to release her first album this year, gave a concert created exclusively for the festival under the title Quiero decirte una cosa que nunca acaba. Cabanyal Íntim will resume its presence in May with the celebration of a festival that encourages its faithful to live the experience of chaos from a playful and scenic point of view.