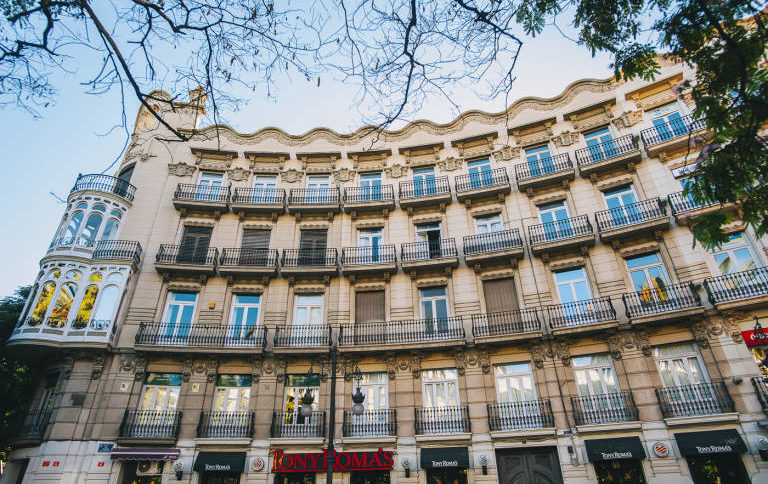 ##Building started on what we now call Cánovas in 1912. It was part of the turn of the century ‘Ensanche’ or suburban expansion of the city propelled by the profits and needs of the newly rich, upper middle-class industrialists and traders in rice and oranges who wished to make their mark on the city and create a lasting monument…

This second phase of the development, designed by Francisco Mora and Vicente Pichó, stretched Valencia southwards from the Gran Vía and down from the river to Ruzafa.  A series of tree-lined streets with elegant Modernist and Austrian Secessionist style houses were seen as a perfect home for the new top-hatted and bewhiskered masters of Valencia… and the area has never really lost its air of celebration of the upwardly mobile, bourgeois life.

The centrepiece is the square which gives the barrio its name, the Plaza Cánovas del Castillo. The Plaza was named after the formidable conservative politician who was behind the constitution of 1876. Cánovas alternated power in the late nineteenth century with his liberal counterpart Sagasta in much the same way as Gladstone and Disraeli did in Victorian Britain. In 1897 (conforming to the fashion of the day), he was assassinated by an Italian anarchist.

The square with two crescents on either side of the leafy Gran Vía serves the dual purpose of being eye-catching but at the same time closed-off and exclusive, as if to say: “You’ll never be one of us but you can come and admire us”. On the corner of the right hand crescent, as you look from the river is the famous modernist Edificio Chapa (1913) with its showy corner galleries and wave design rooftop.

This area has often been associated with the more conservative elements of Valencia society and during the ‘70s and early ‘80s it was known by some as the ‘Zona Nacional’ , one of the areas of Valencia with the highest number of Spanish flags hanging from the balconies… mourning the death of Franco.

In the middle of all this, and as a symbolic as anything else in the area, is the falla-esque statue at the top of the Gran Vía designed by Mariano Benlliure. Rather than a tribute to a great artist or an ancient hero, here in Cánovas you naturally get a statue to one of their own, the Marqués de Campo. An archetypal 19th century paternalist of sorts. He was mayor, aristocrat, industrialist, intellectual and philanthropist, a man whose love for humanity was second only to his love for himself. There he stands tall, dressed to the nines in the grab of the time with his adopted son next to him, an Oliver Twist-like figure who the Marqués had plucked from the misery of poverty and brought up as his own. Down below, his business interests of shipbuilding, city gas and the railways are represented along with (lest we forget) his great works of philanthropy like the Casa de Beneficencia workhouse and the Asilo de Marqués de Campo old people’s home. He did a lot of work for charity but he didn’t like to talk about it. He just had a huge statue erected to himself at the end of the Gran Vía.

While Cánovas has always been considered to be ‘a good address’ for lawyers’ offices and private medical practices, since the ‘70s it has also become a key area of the city for bars and restaurants. On the right hand side of the Gran Vía is a true Cánovas  staple, Aquarium. A perfect name for a place where, for the last four decades, gentleman of a certain age and a certain social class (who really should know better) float around hoping to be seen in their jaunty nautical shirts, expensive jeans and loafers. But Cánovas, of course, is not just a place for the over-sixties. During the 1980s it became THE place to meet for private school teenagers and well-heeled students.

The story goes that it all started when Bar Zorba’s on the corner of C/ Salamanca became a favourite meeting point for the pupils of the all-boys Catholic school Maristas and their counterparts in the posh Loreto all-girls school. From there, bar after bar opened throughout the adjacent streets keen to get hold of a share of the cash from papá in exchange for plastic cups of dodgy spirits. Before long, kids in monogrammed polo shirts with a little Spanish flag on their watches and Ray-Ban sunglasses perched on their slightly-too-long, gelled-back hair… were pouring out onto the Gran Vía, cubalitro in hand, every weekend night.

Nowadays, things are a little less raucous. Once strewn with noisy bars, C/ Salamanca is now filled with family restaurants and terraces but there’s still plenty of fun to be had in the area for those looking for a night out. C/ Conde Altea and the streets leading up to the river are popular for pubs and clubs of every type where, over a nice pint of Guinness, Cánovas types can practice their English and reminisce about the business ‘masters’ they did at Loughborough University.

If you are looking for something a little different, the authentic American cervecería Portland Ale House (C/ Salamanca, 10) offers a variety of good American beers and a friendly mixed crowd of people from around the world with a popular quiz & language exchange nights. On the right side of the Gran Vía, housed in the Edificio Chapa, is the well-known Irish pub St Patrick’s (Gran Vía Marqués del Turia, 64), run by a welcoming staff and highly popular with locals and expats for live sports, including football and rugby. Don Salvatore (C/ Conde Altea, 41) is an Italian restaurant run by the legendary Jonathan, personal friend of all the sports stars who visit on a weekly basis.

Though modern Cánovas may have lost some of its pijo (posh kid) image, it still likes to see itself as a little bit upmarket. The kids from Maristas and Loreto have grown up and now like to patronise the many high-class gyms and beauticians, the acupuncturists and alternative medicine centres, the boutiques and little shops selling expensive children’s clothes and organic food and, of course, the odd top-quality-if-ever-so-slightly-pretentious restaurant. It certainly hasn’t lost its inkling to be showy, all those smart tree-shaded terraces and shop window-like bars offer the perfect opportunity to see and be seen. You, too, can be another fish in the aquarium.