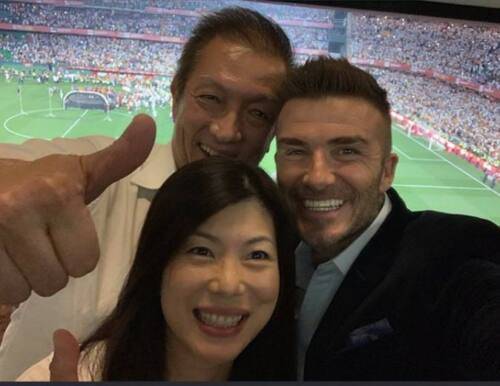 >##It’s a long way from Leytonstone, mate. David Beckham arrived in Spain in the summer of 2003. Joining Real Madrid, the self-proclaimed ‘best team in the world’ he arrived with great expectations. Playing alongside galácticos like Ronaldo, Zidane, Figo and Raul he was hoping to learn a useful language, get a bit of a suntan and add extensively to his trophy collection.

Two years on, he learnt to tell journalists “to go **** yourselves” in purest Castellano and was hinting at leaving the country because the paparazzi wouldn’t leave his family alone: ”They’re crossing the line.”

The more jaded hacks pointed to the fact that he had won nothing of note since he had arrived at Madrid. The team of ageing stars were not shining anymore and a major overhaul of players could be the only solution. What better time to leave an ailing giant before he gets asked to by the president?

The ’24/7 Valencia’ interview with Beckham took place after the Valencia v Real Madrid match in March 2005. During the match, the less charitable sections of the crowd chanted all sorts of insults about Becks and his partner. Despite the abuse, he got on with his job. Like the rest of the Real Madrid team, he looked tired and they were lucky to get a draw against a re-energised Valencia team. Suffice to say, Beckham was substituted in the 77th minute for midfielder Albert Celades!

Post-match, the ‘24/7 Valencia’ reporter found Beckham to be very amenable and happy to spend some time with the English Speaking journalists from the ‘Daily Mail’, ‘The Guardian’, ‘The Sun’ and ’24/7 Valencia’. For somebody so much in the spotlight, he was refreshingly down-to-earth and normal in his demeanour. Spending a quarter of an hour with him face-to-face, you sensed that he was quietly taking his universal fame in his stride.

Regarding the Premier League, Becks chatted about the ”incredible Van Nistelrooy being back at Man Utd was a massive boost for the team”. Regarding the Liga and his toll of yellow cards, there was the obligatory: ”Obviously, I’m going to be disappointed to be missing the Getafe game”. Yeah, right.

At one point, his green eyes swivelled in the direction of our ‘24/7 Valencia’ reporter… who had once worked as a kitchen porter where Victoria and Beckham happened to have had their first ever date on the outskirts of London at ‘The Castle’ in Woodford Green. Although born in the East End, Becks had grown up in neighbouring Chingford…

24/7 Valencia: David…One question about food. Which do you prefer? Fish ‘n’ chips or paella?

David Beckham (long pause, eyes caught in the searchlight moment) “Uhhh…I like them both!!!”

So there you have it. Mr Beckham, at heart, is a diplomatic soul. Despite all the pressures and fame, there’s none of the insolence and dismissiveness that some footballers are famed for. He happily allowed ’24/7 Valencia’ to take exclusive pictures for the article.

While the boy Becks and his Spanish team grabbed most of the headlines over the seasons, an historic club on the Mediterranean coast  got on with the job of winning the Spanish League twice, the U.E.F.A Cup (Europa League) and the UEFA Super Cup. Indeed, they were ranked statistically as ‘Best club team in the World 2004’ by U.E.F.A. The name? Valencia Club de Fútbol…

In 2013, Beckham returned to Mestalla to watch the Valencia CF v PSG Champions league match from the stands. Just days before, he had signed for the Parisian giants and Mestalla was his first public appearance…albeit from the terraces and not the pitch.

David Beckham is now President & co-owner of ‘Inter Miami CF’… and their manager (from 2019-2021) was former Valencia CF striker Diego Alonso! The new manager of Inter Miami Cf is Phil Neville…who was assistant coach at Valencia CF and who had continued to live in Valencia when his tenure ended with the Spanish club. A long-term friend of Beckham since the Manchester Utd days, Gary Neville endured a difficult time as manager of Valencia CF.