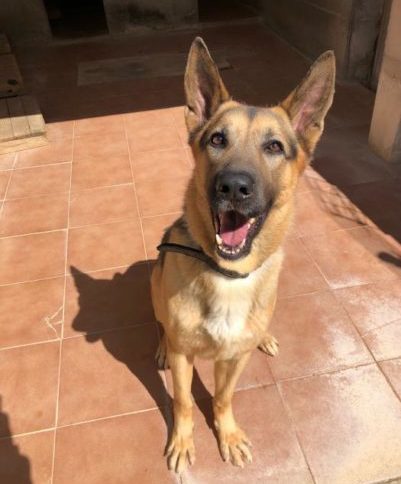 With its numerous parks, open spaces  and the emblematice ‘El Rio’ Turia Gardens meandering through the centre, Valencia is a great place to own a dog. I love animals…and I especially love dogs. Not having one here in Valencia, an incredibly dog friendly city, has been a thorn in my side since I arrived. I’d love to adopt a furry companion, but with my circumstances always slightly up in the air, I’ve despairingly concluded that now is not the right time to own a dog.

So having made that decision, but still wanting to spend time around dogs, I decided to do a bit of research into animal shelters in Valencia, with the hope of finding a place in the centre or close by to volunteer my services. My search led me to S.V.P.A.P (La Sociedad Valenciana Protectora de Animales y Plantas), an animal refuge on the outskirts of Valencia. Motivation in place, I immediately sent them a Facebook message, which they responded to the next day telling me to come along and help out that weekend. Great news! Volunteers are welcome there to walk the dogs, or to help with cleaning the cages on Mondays, Wednesdays, Fridays and Sundays from 09:00 h–14:00h.

I don’t drive but it was easy to get there, being only a 20-minute bus ride towards Lliria on the number 145 from outside Nuevo Centro. I was a bit lost at first, but I followed the sounds of loud, excited barking and found the refuge on an old industrial estate. The first thing I noticed was a big ‘S.O.S’ spray painted on the wall, and my feeling of excitement faded away as the reality of the situation sunk in. Those barks weren’t excited greetings, they were from desperate animals, just like most of the dogs I was about to meet, dogs that were only there because they’d been abandoned or mistreated.

I spent a few hours there taking the dogs for short walks; 15-20 mins a dog I was instructed, ‘and no feeding them!’ I guiltily pushed the barritas de carne to the bottom of my bag). I had been excited at the prospect of playing with dogs and getting slobbered on, but as I walked the dogs they were far more interested in sniffing at everything and navigating their way through the rough terrain surrounding the sanctuary to pay me any heed, let alone put up with me constantly trying to stop and stroke them. I got the point, and instead just followed their lead (no pun intended). They just wanted to stretch their legs and feel free!

When I got home later that day, I couldn’t stop thinking about the refuge and I wanted to know more about the place, the people that were working so hard there, and of course, the dogs.

Here are some of the facts:

I decided I wanted to speak to someone who knew more, so I headed back a few weeks later and was introduced to Bea, who told me a bit more about the place and it’s residents.

How many dogs are in the refuge at the moment?
Here we have 400, but we have more dogs who are being fostered, which means that they’re living in homes with people, but we’re still paying for their medications, veterinary bills, special food requirements etc. So that´s also another bill…The dogs who end up here have been abandoned, we take only them in because we don’t have the money to look after every dog who is living on the street. Sometimes the puppies get left on our doorstep or people bring in older dogs who’ve been abandoned due to illness, or age or who knows?

Are there regular adoptions?
Adoptions are generally seasonal; the number obviously drops dramatically during the summer. We often find young dogs, and when checking their backgrounds, we see they’re abandoned because they’ve grown too quickly or too big and the people no longer want them. People don’t want dogs that are sick. People don’t want dogs that are old. Those are the dogs that most often need a loving home.

What do the dogs need here aside from food?
We need everything here, whatever people can donate we happily accept. We always say that if you have something you won’t miss, send it our way; think before you throw things in the bin! Towels, blankets, sheets, tinned dog and cat food, anything! Money obviously too! But literally anything you think could be useful, please bring it to us. And volunteers of course!

24/7 VALENCIA: Bea showed me around and it was a struggle to keep the nagging ‘go on, adopt one!’ voice in the back of my mind firmly shushed as I listened to some heart-breaking tales. I asked if she had any dogs that were particularly special to her, and she brought me over to meet ‘Moro’, an eleven year old they’d been looking after for just under a year. Moro came over to the cage bars wagging his tail in response to hearing Bea.

He’s a street dog, who always lived outdoors; he grew up as a puppy on the streets we’re sure. He slept under cars, on patios, and he was brought into us, injured, after a car accident. The thing is, he’s older now, and he needs a home and stability. On top of that, medical attention as he has an illness. And here he is, the poor thing, he’ll surely die here.

“No matter how little money and how few possessions you own, having a dog makes you rich.” – Louis Sabin

For more information on how to adopt an animal, donate, or volunteer, you can contact S.V.P.A.P through their website: www.svpap.com, or like them on facebook @Grupo mantenimiento Svpap to keep updated on any upcoming fund raising projects.