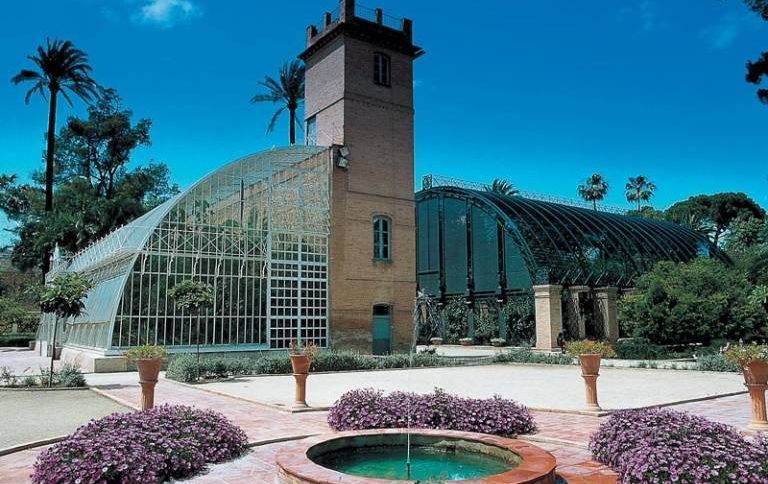 24/7 Valencia: Please describe the Botanical Garden of the University of Valencia…

JARDÍ BOTÀNIC: “The Botanical Garden of the University of Valencia is a living museum located in the historical centre of the city which is open to the public and aims to let people connect with the plant world by fostering its study, teaching, dissemination and conservation, as well as its sustainable use.

Among other objectives, the Garden maintains a scientific collection of live plants, preserving a historic legacy of continuous cultivation, which includes monumental trees and historical buildings.

Furthermore, it has the responsibility of maintaining the tradition of botanical gardens in Valencia, which date back to the 16th Century, when the university created a physics garden for the purpose of teaching medicine.

Beneath its cloak of vegetation, which extends over approximately 4 hectares, we can travel to each of the continents, imagining exotic or far-off places, or seeing close-up the plants that inhabit our Mediterranean countryside, all of which serve to remind us of the great biodiversity housed on our planet.

This is a wonderfully rich plant world that we are discovering more and more thanks to botanists such as those who work in our Garden; those who participate in different investigation projects centred on the conservation of rare, endemic or threatened plant species of the Mediterranean, the conservation of natural habitats, and the knowledge of plant diversity.

So that our visitors can actively participate in the Garden, we provide an endless calendar of educational and cultural activities for all sorts of people yearlong. Science, culture and nature – discover the Botanical Garden of the University of Valencia!”

Can you tell us more about its history?

“The botanic garden of the Universidad de Valencia, known as El Botànic, was founded in 1567. For 200 years it was a cultivated plot used to grow medicinal plants, linked to studies in Medicine. Up until the 19th century it was located in a number of places within the city of Valencia.

The year 1802 marks the point at which the University definitively moved the gardens to el Huerto de Tramoyeres, outside the city walls, near the Convent of San Sebastián, near the Torres de Quart.

Throughout the 19th century, classes in Botany were given there and acclimatisation experiments were carried out with plants of agricultural interest. During the 20th century, El Botànic fell into abandon for a long time until, in 1987, the Universidad de Valencia began the process of fully restoring it, which concluded in the year 2000.

Currently, the Garden carries out research into plant diversity, conservation of rare, endemic or endangered species of Mediterranean flora and the conservation of natural habitats. Furthermore, there is continuous educational and cultural activity carried out by the departments of education and cultural events and the press office.

The Garden suffered the historical events of the first half of the 20th century: the colonial wars, the Civil War, the post-war period and the flood of 1957. During this period of decline the director was Francisco Beltrán, who took care of maintaining the collections and exchanging seeds, as well as keeping a record of the plants grown there; however, all this was lost under water during the flood. The next two years witnessed the tasks involved in recovering the Garden, removing the mud and cleaning up. In 1962 Beltrán died and Ignacio Docavo took over the directorship.

The first steps taken by Docavo focussed on recovering the buildings in order to rehabilitate the library, the herbarium and the seed bank. Outside, only the large trees remained, and the shade-house and the greenhouses had fallen into great disrepair. The Catalan gardener and landscape designer Juan Pañella was appointed to remodel them, with a view to creating a shaded garden and a tropical garden. Later, Pañella also directed the creation of a garden with succulent plants.Also under Docavo’s directorship the teaching activities recommenced; first, with the practical demonstration classes in Botany run by the School of Sciences and, afterwards, those run by the schools of Biological and Pharmaceutical Sciences.”

Can you tell us more about its restoration?

“In 1985, El Botànic was recognised in the University Statutes as a “university centre for research, teaching and culture”, and became dependent on the central governing body of the university. Two years later, the Chancellor Ramon Lapiedra appointed Manuel Costa, Professor of the School of Pharmacy, as director of the Garden and put him in charge of drawing up a project for its full restoration.

The restoration was carried out in two phases, the first (1989-1991) aimed to recover the area covered by gardens, including the restoration of the buildings and enlarging the plant collections. New collections were housed in the greenhouses (orchids, bromeliads, succulents, tropical and carnivorous plants) and opened to the public.

Also, the School of Botany Garden was replanted in line with the modern concepts of systematics. On the 12th of June 1991, El Botànic opened its doors to the public. The Garden began a new epoch of scientific dissemination, educational activities, research into biological conservation and cultural activities.

The second phase in the restoration process involved the construction of the research building, which was inaugurated on the 18th of May 2000. At this point Antoni Aguilella took over the directorship of El Botànic, marking the beginning of a new era in which Science, Culture and Nature have become the three pillars of the new 21st century garden.”

Could you tell us something about the plants?

“Spread throughout the Garden and grouped together according to their use and cultivation, we can find different collections of useful plants. The medicinal plants are placed on the northern edge of the garden, in a square bed inspired on the conventional convent cloisters where they were originally grown.

Above all, those typical of Valencian ethno-botanical use are grown, like red and common valerian, which have calming effects; those with disinfectant properties, like rosemary, thyme or sage and, the ones used for stomach complaints, like mint or camomile.

There is also a spot reserved for the poisonous plants used in phytotherapy: oleander, laurustinus or the common fern.

Growing in the centre of the Garden are useful plants of industrial use: cereals, legumes, soy, cotton, tiger nuts or sugar cane, which vary according to the time of the years or teachin requirements.

On the southern edge of the Garden we can see specimens of the typical fruit trees to be found in the huerta and the inland Valencian regions: peach, almond, pomegranate fig; and also exotic ones like the kiwi, mango or pistachio.

Among the plants grown in the huerta, which change according to the season, there are different varieties of cabbage, aubergine, water-melon, broad-beans, lettuces and artichoke.

Also, there is an area measuring 300 square metres2 growing citrus: oranges, grapefruits, mandarins, lemons; and in the Plaza de Carlos Pau there is also an exhibition of these specimens.”

Are you open all year?

“We are open every day, except the 25th of December and the 1st of January and days registering wind and rain.”

“Entry is 3€ with discounts for groups,  young people between 7 and 16 years of age and pensioners from the age of 65.”