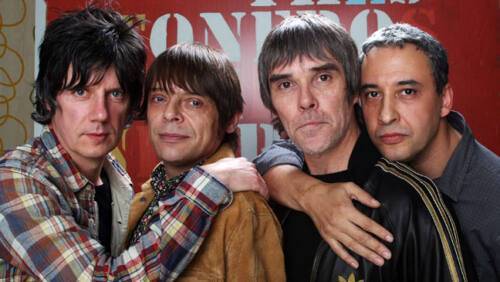 ##It’s been a long, strange trip. ’24/7 Valencia’ magazine’s relationship with The Stone Roses stretches back to 1989, when resident ’24/7 Valencia’ photographer Kaiko witnessed and shot photos at their legendary gig at the Barraca club in Sueca in the Valencia region. Between 2002 and up to the present day, the ’24/7 Valencia’ editor has been fortunate to have hung out a fair bit with Mani and Ian Brown, too, in the city of Valencia or at the FIB festival in Benicassim.

Indeed, when Mani DJ’ed in the city of Valencia , he met the editor of 24/7 Valencia at the bar of ‘Loco Club’ and there began a musical conversation/interview/surreal night out over a good few beers and spirits that began at 10.00 pm at El Loco, witnessing an edgy and local  rock’n’roll band, a DJ Mani set at the decks,   a walk around the Juan Llorens district, a drive through the old centre, and ended around 6.00 am in  the electronica Latex Club!

Contrary to the Stones Roses’ public image of cool detachment, the ’24/7 Valencia’ editor found Mani to be genuinely friendly and approachable. He was open to the point of being garrulous, very witty, and a right character with endless anecdotes – including unprintable information about the secret drug habits of a talented “Notting Hill” actor – as well as a never-ending stream of surreal dialogue including stuff about backstage frozen chickens, meeting Mick Jagger in Benidorm and “camel toes”.

As the drink and the conversation was flowing while discussing favourite bands with Mani like Primal Scream, the Byrds, Love, Oasis and Shack, it was due to Mani’s friendly insistence to this 24/7 Valencia’ editor – “You really know your music…stay out with me, man” – that we made a whole night of pleasantly painting the town red in Valencia.

This was one of the world’s best bass players happy to spend hours and hours in Valencia with ordinary people like me or you, people who love music, people who like to have a good time and people he can connect with. After clubbing all night and talking music and more, Mani left the ’24/7 Valencia’ team at the club at dawn with the biggest bear hug humanly possible before returning to his wife at the hotel. A surprisingly warm, generous person and a real man of the people. A little crazy, yes, but in a good way. A proper rock ’n’ roller…

Here are some exclusive extracts, never published before, of just some of the times spent with arguably the two most charismatic members of Stone Roses.

24/7 Valencia: As an English musician…

Mani: (interrupts with mock indignation): I’m not English! I’m from the fuckin’ People’s Republic of Manchester!

It’s called the “Republik of Mancunia.”

Where did it go wrong with Stone Roses during the recording of your second album, Second Coming?

Mani: We all ended up hating each other. Everyone was on a different drug. John Squire became a cokehead at the time, Reni would stay in bed. Having said that, John and Reni are great musicians…they make me sound good! John is also godfather to my children. It was a love/hate thing but we’ve buried the hatchet now.

Any good memories of those times in Wales?

Mani: Yes, we went up to see Arthur Lee & Love play a great gig in Liverpool. We were high as kites on skunk, climbing up the walls! It must be a jinx ‘cos Arthur Lee has since died!

What are your memories of playing in Valencia in 1989?

Ian Brown: Them were the days…

Mani: We did the Valencia gig on a Friday night at Barraca and then we got driven down to some clubs by the beach with some dodgy characters from those ‘Ruta de Bacalao’ days. We went clubbing all night and went for it. Amongst our entourage we took 50 Ecstasy pills, 7 ‘trippies’ and some speed, too. John and Ian went back to the hotel to get some sleep on Saturday afternoon and I kept partying until the following Sunday evening…one of the best fuckin’ weekends of my life!!! 48-hour party people!

Any inside info on the songs you recorded?

When you were in Primal Scream you supported and met the Rolling Stones in Benidorm. How did you find them?

Mani: When I met Jagger, I told him in a Bo’ Selecta voice, “I’m having a sex wee!” Mick Jagger is tiny! He’s shorter than me! He came and shook hands with the band to congratulate us (breaks into mockney accent), “for a fucking great shooow.”

Do you know Valencia well?

Mani: Yes, I do. My brother Gregory and his family live in Jávea, down the coast from Valencia. So, I come down and visit when I can and I always have a good time. You’ve got the sun here, not like Madrid or bloody rainy Manchester where I live! 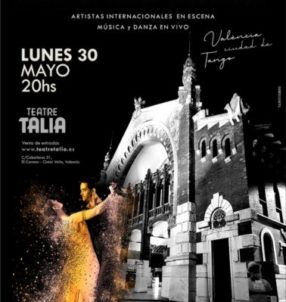