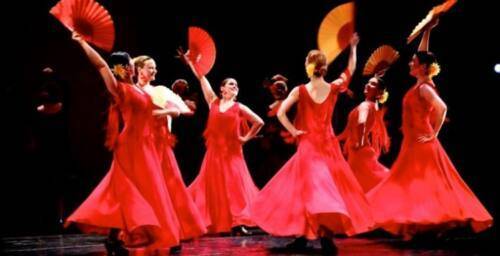 Flamenco Springs to Life in Valencia 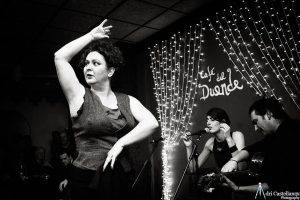 So here you are in Valencia, just passing through or setting in for some studies, you’re in the mood for live music and figure this is Spain, why not some flamenco? You leaf through the 24/7 listings and let’s see, Café del Duende is always good to go on Thursday night, the Arachí series is the Tuesday night entry in Radio City’s mixed bag of culture programming tricks. Hmmm…always a healthy number of flamenco artists (some national figures, too) in El Loco ’s concert schedule any given month, too. Not bad, really, even though maybe you could complain it seems a bit light for the third largest city in Spain…

…Better bite your tongue. If this was 1996, your live flamenco in Valencia options would number absolute zero. Pretty hard to imagine the situation was so dire so recently but the isolated clusters of flamenco fans then lived for the Palau de Musica’s annual festival in the fall and played the music in their pisos, cars or Walkmans. The city never had any real tradition as a big flamenco centre so the scene in Valencia is being forged even as we speak-the analogy of a babe in diapers gets tossed around a lot.

There’s also a goodly amount of excitement and upbeat energy surrounding it, that special sense of being part of something new as it’s happening which seems to go along with anything cultural that springs up from nothing.  Nothing, that is, except the initiative of the group of friends who took over a neighbourhood bar on C/Turia and saw Café del Duende tap into a current that’s starting to put Valencia on the flamenco map.

‘‘We were really lacking a place where we could listen to flamenco and talk about it, especially after seeing a concert at the Palau,’’ related Tina Castillo. ‘‘It was a brutal shock to leave a flamenco concert and go to any bar in the Carmen and listen to a completely different music-not that we don’t like it, but it wasn’t what we wanted to listen to at that moment.’’

‘‘Café del Duende was born a little bit from the lack of a place where you could hear flamenco, not just concerts but where the music being played was flamenco. We thought there were a lot of people  like us, desperate to find a place, and when we opened they didn’t stop thanking us: ‘Finally, there’s a place for flamenco in Valencia.’ ’’ No one disputes Café del Duende’s position as the catalyst for the flamenco surge in Valencia and inspiration for El L0co  and the Arachí series. (If you’re not familiar with ‘‘duende’’, it’s the flamenco term for that indefinable something that hits home emotionally and separates the real deal from the run-of-the-mill, like saying a great singer has soul). Café del Duende still is the focal point, a meeting spot where flamenco pumps out of the sound system on nights with no concerts, too.

It’s also become a launching pad for musicians as the people who used to sing and play at flamenco house parties slowly but surely began performing for a general public there. Now it’s a contact centre where local musicians forge new groups, people from outside Valencia to get in touch with players here for gigs, and both gypsy and payo (non-gypsy) flamenco-lovers hang together.

Wednesday night is for theatre groups and storytellers but prime time at Café del Duende will always be Thursdays, when some combination of guitars, singers, and percussion players sit down in front of the mikes. They’ll most likely be familiar regulars, some who have gone on to play at other venues and others who don’t need to take it no further than the Duende stage. Things to pretty much count on: the place will be packed out by 100-150 people, the reasonable  6 euros ticket at the door will include a drink, and the crowd will be largely 20-somethings. ‘‘What I really like is that the youth have come into flamenco in a very pure way: ‘Let’s see what’s going on with this music,’ to get to know it,’’ says Castillo. ‘‘At Duende, there are all kinds of gypsies, all kind of payos, people who come from rock or funky.’’

‘‘I wouldn’t have liked if it was a very homogeneous audience, only a flamenco crowd, but that hasn’t happened. Some people are afraid of flamenco because they think it’s a world of experts but it’s not like you need to be really knowledgable and take music classes to enjoy this music.’’

‘‘We started with few resources and a lot of high hopes, we’re continuing with few resources and we can’t bring in major figures,’’ Castillo sums up. ‘‘Café del Duende wasn’t conceived for that- our idea is more family, we’re looking for the warmth of intimacy. The intimacy and size of the place give it a distinct ambiance for the musicians who play here.’’

There’s a big blown-up photo on the wall by the sound booth at El Loco (formerly Loco Mateo) that contains the only known picture of the club’s namesake, Mateo La Sera (shades of Delta blues master Robert Johnson, no?). He never made any records-he died in 1890, during the formative decades of flamenco, but he’s a cult figure to the cognoscenti for the impassioned lyrics to a dozen-odd songs he wrote after he fell in love with his best friend’s wife (the old Eric Clapton -Derek & the Dominos’ ‘‘Layla’’ story, eh, rockhounds?).

‘‘He had a conflict in his life, an impossible love, so he went crazy and began to write the most heart-rending, gut-wrenching songs and that’s when he began to get famous,’’ continues Gustavo Gordey, one of Loco’s  owners. ‘‘We were looking for a name and suddenly, this woman who loves flamenco appeared and said she’d seen this story on the Internet. We went up to look and said, ‘That’s it,’ because it’s a nice, catchy name and a cool one since there’s a story behind it, a ‘because.’ ’’ It’s a different concept and scale of live music- the comfortably laid-out space on C/Erudito Orellana near the Juan Llorens zone has good sound, a roughly 300-500 person capacity and functions as a regular pub when the concert is over or on nights when no live music or theatre is scheduled.

Since opening, El Loco has brought big flamenco world names like Raimundo Amador, Dunquende, El Nino Josele, Maite Martin and Martires del Compas to Valencia. The booking policy they pursued with flamenco artists was never %100 purist-Amador and Martires should tell you that- so it was a natural step for the venue to expand into jazz fusion (Scott Henderson, Steve Smith) and world music (Cheikh Lo, Trilok Gurtu). Trumpeter/conga player Jerry Gonzalez is a regular visitor, whether leading his own Fort Apache Latin jazz group or flamenco fusing with Diego El Cigala.

‘‘You have to start changing habits and first you have to offer something to create the habits,’’ says Jose Vallejo of El Mussol, the company handling Loco’s press and promotion since last December’s festival featuring Amador and the Sedajazz Big Band. ‘‘Which came first, that there weren’t any halls that brought in these artists or that there were a lot of discos that brought in the ruta of bacalao and made that a tradition among the youth?’’

Blanco Añó, who started the weekly Arachí series in Ruzafa but moved into the Tuesday night slot at Radio City two years ago, is pretty yin-yang when it comes to music. He’s drawn to the roots with flamenco but his other abiding passion is the electronic music he not only produces but projects forward as director of the annual Observatori festival at MUVIM.

But flip it and reverse it again-he doesn’t like to mix the two sounds and has serious reservations about the new flamenco- chill school that would seem a natural avenue for him. Not that all the artists Arachí presents are traditional, far from it.

‘‘Flamenco, like most musics, has to be open to influences from other sources and cultures and even more so today, in the society of mixture and communication we live in,’’ he says. ‘‘What I like about Arachí is the variety it offers- you can find everything from artists who are absolutely pure and traditional with the styles to artists who do flamenco fusion mixed with pop or jazz, too. I think the beauty of flamenco is there in the variety, in showing the different forms flamenco can have.’’

Arachí shares the local artist emphasis of Café del Duende, with Añó checking out performers at parties and other venues and listening to demo tapes to select the artists for the series. The once-a-week slot is a good fit at Radio City (where the door charge is 4 euros with a drink), too, since people just out for a Tuesday night in the Carmen/Velluters zone may wander in and have their first chance encounter with flamenco in the flesh.

‘‘It’s a very young audience that hasn’t lived  that rejection from decades before,’’ says Añó. ‘‘All the literary richness flamenco has, aside from the rhythmic parts and the rich musicality, the lyrics are so impressive and so convincing they touch the heart of everyone.  Bear in mind many flamenco artists still are using lyrics that were written in the first three decades of the 20th century. I believe the lyrical part has hooked the youth a little.’’

Añó holds that another reason for this… well, mini-boom, anyway, of flamenco in Valencia is more Spanish youth beginning to shake off the taste-shaping efforts of the Anglo pop music/culture industry to value and embrace their own Latin culture more. Tina Castillo relates it to the old rejection by the transition generation (i.e., 40-50- somethings) in Spain fading away as flamenco loses its folklore-for-tourists stigma from the Franco regime. For Jose Vallejo, the growing interest in world music and some anti-globalization social movements play a big part. No consensus there, though they’re all pretty closely linked and the new generation factor is clear, but I’m pretty sure there is across-the-board agreement with these Añó sentiments about staging live flamenco in Valencia.

‘‘I find it very nice to find gypsy fans who come to listen, or the curious who are beginning to like flamenco, or people who have no idea, or people from Erasmus who are maybe researching the topic of Spain and flamenco.’’

‘‘I’m very happy they’re out there because I know what we’re offering isn’t flamenco for foreigners, but the flamenco that flamenco fans are listening to. We’re offering them something with value as far as quality, not some ersatz substitute made for tourists. And that’s something very good for them.’’

Websites for Live Flamenco in Valencia