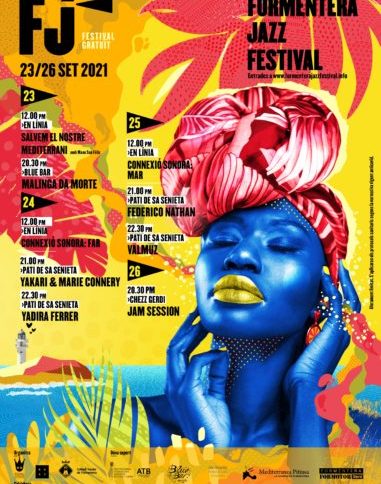 ##Everything is ready for the 7th edition of the Formentera Jazz Festival Hybrid format, from 23 to 26 September!

After the good reception of the virtual programme of 2020, the 7th edition of the FJF will combine a programme of face-to-face events with concerts by local, national and international artists, and a parallel and international artists, and a parallel programme of virtual activities focusing on the reflection on the reflection on the sustainability of the festival’s natural environment. There is a Valencia connection with the ‘Formentera Jazz festival’ in that a number of the featured artists are based or have been based in Valencia. You can also follow the festival virtually via its social media.

Live performances – Online sound connections – Talks
________________________
Everything is ready for the 7th edition of the Formentera Jazz Festival, which returns to the paradisiacal island of Formentera, in a hybrid format from 23rd to 26th September.

In its 6th edition, last August 2020, under an exclusively online format due to the health crisis, the festival was not only able to continue celebrating the magic of the music and the island, but it also took advantage of the situation to foster a collective reflection on the need for a reconnection with nature and the positive impact it had on it… during the months of respite.

The audio-visual programming mixed artist presentations, as well as immersive content from remote corners of the island, giving space to present preservation and conservation projects, which were very well received by a global online audience through their YouTube, Instagram and Youtube, Instagram and Facebook channels; a sign of the enormous impact and consolidation that the Formentera Jazz Festival has beyond its physical limitations.

Now, just a few days away from its 7th edition, #FJF2021 reaffirms its goal of connecting audiences with the nature and magic of the island through live music. To this end, the festival is already everything is ready to take place on the 23rd, 24th, 25th and 26th of September in a hybrid format in which it will combine live performances with the public from the Blue Bar, the Patio de Sa Senieta and the Chezz Gerdi, with live broadcasts via ‘Conexiones Sonoras’ from the Faro de Cap de Barbaria lighthouse or from different points of the city or from different maritime points on the island, again using streaming as a tool for broadcasting.

In terms of sound, the Formentera Jazz Festival will continue its commitment to showcasing the intersection of jazz in different musical genres, promoting different musical genres, once again encouraging national talent, as well as local talent from the Balearic Islands, in what is once again a Balearic Islands, in what is presented as a celebration of safe culture and the value it brings to both local society and the visiting community.

And in all its programming, the aim is always to take advantage of this event to make visible and promote a reflection on sustainability in the natural environment that surrounds it, and in the way we relate to each other socially…in terms of consumption and respect for the environment as individuals and as an event, thus trying to add steps in the still necessary path to achieve sustainability from the music and cultural industry.

PROGRAMME #FJF2021
Thursday 23rd September
From the hand of the National Geographic explorer and marine biologist, Manu San Felix, renowned photojournalist who has dedicated his life to researching and caring for the natural world, specifically the underwater natural world, specifically the underwater environment and, of course, everything related with Posidonia…the festival kicks off on Thursday 23rd online with a talk-interview entitled ‘Salvem
el nostre mediterrani’ (12.00h), in line with the festival’s desire to raise awareness of Posidonia.

The opening day will culminate at the Blue Bar (8.30 pm) with Malinga de Morte, an artist based on the island, who will give us a musical session that will include Afrobeats and different sections of jazz and electronic sections, with the particularity that the DJ booth completely powered by solar energy, in line with the sustainability promoted by this edition of the festival.

Friday 24 September
From the 2020 edition, which finally had to be 100% online, a new experience emerged – an online-festival experience, registering audiences of up to 22,000 spectators from countries such as Argentina distributed on its Youtube, Instagram and Facebook channels.

From the good feedback received by international audiences – who saw their chances of attending reduced – they return to the Formentera Jazz Festival, the Sound Connections return to Formentera Jazz Festival, broadcasting live, from different magical enclaves of the island, to listen and observe it. This series of online connections will kick off on Friday at 12.00h with the “Connexió sonora
from Es Far”, the Cap de Barbaria lighthouse, watchtower and guardian of the paradisiacal island of Formentera.

In the on-site part, the festival moves to its main stage in the Patio de Sa Senieta in San Francesc (21:00h) with a live performance by local band Yakari & Marie Connery. Nuno Alves, also known as Yakari, is a trumpeter based in Formentera with a long career in the world of jazz and jazz music. He is the trumpeter with lauded trio ‘Folk-Jazz-Arabe’ and he has a long career in the world of jazz and improvised music. His musical career has included fusion in Big Bands, as well as tribute bands to great jazz masters such as Lee Morgan and other legends. Nuno got together with keyboardist Julien Catonne and decided to form a 70s/80s jazz funk project and paying homage to masters like Miles Davis and Billie Cobham. This gave birth to the band Yakari & Marie Connery, taking advantage of electronic resources… to bring a richer and more alternative sound and groove. They are currently currently working on the recording of a Jazz-Funk album.

They will be followed at 22.30h by the singer Yadira Ferrer, an artist who is part of the new generation of prodigious voices that Cuba has harvested. Yadira combines her classical training with a strong Cuban sound influence, which makes her live performances into a beautiful, genuine and vibrant musical proposal, with which she invites us to take a stroll via the roots, the legacy and the future of the music of the island, always keeping in mind the pulse of Cuban music, the African pulse and the sweetness and rapture of the music of her island. She will be joined at the festival by Jimmy Jenks on trumpet and percussion, Frank Durand Crespo on drums and Dany Noel on double bass.

Saturday 25th September
At 12.00h the different virtual windows of the festival will be open to the “Connexió sonora desde es mar” from different beaches and underwater environments of Formentera. At dusk the festival will meet again with the public again in the Patio de Sa Senieta at San Francesc (21.00h) with one of today’s great improvising violinists, Uruguayan violinist Federico Nathan. Federico Nathan, who, among other projects, is one of the soloists in the Metropole Orchestra in Holland, winner of three prizes for the best violin in the world and winner of three Grammy awards. Although the language of his music is based on contemporary jazz and improvisation, Federico has mastered both his own compositions and arrangements and combines different musical genres. The result is a journey through different universes of sound, erasing the barrier between classical and popular music, creating a music free of prejudices and deeply imaginative. He is accompanied on stage by Baptiste Bailly on piano and keyboards, and Mariano Steimberg on drums.

At 22.30h following in the Patio de Sa Senieta, Valmuz, a band whose members come from Ireland, the United Kingdom and Spain. Winners of the grand prize at the Johnny Jazz Festival Raducannu 2019, Romania. The group have released their album “Three Days”. Valmuz explores organic and electric music with a strong groove filled with funk, heavy metal elements, psychedelic passages and Latin rhythms. There are also subtle moments and room for ballads and mid-tempo interludes. It is a kaleidoscopic vision in which jazz bursts in to link different genres. The lead vocals, electric bass and guitar, drums and saxophone inject lyricism into the electric ambience…making it an atmospheric repertoire. The project consists of four members: Peter Connolly on guitar and vocals, Chris Attwell on bass, Victor Jimenez on alto sax and Jamie Murray on drums.

As it does every year, the Formentera Jazz Festival will close the festival with all the musicians participating in the festival in its now iconic Jam Session, in which improvisation, the essence of jazz music, will once again be the only common thread, although for the first time, due to protocol, it cannot be open to the public.

IMPORTANT:
All content is free of charge, but for all spaces it is essential to reserve a seat, due to the limited seating capacity.
Below you can find the direct links or also through the festival’s website.
● THURSDAY 23RD: https://www.bluebarformentera.com/en/restaurant.html
● FRIDAY 24TH: https://entradesformentera.cat/espectacles/jazz-festival-24-setembre
● SATURDAY 25TH: https://entradesformentera.cat/espectacles/jazz-festival-25-setembre
● SUNDAY 26: https://www.chezzgerdi.com/formentera/reservas/

In short, the countdown to the 7th edition of the festival has begun, and it is a unique and exciting opportunity to celebrate once again the longed-for magic of live music on the island and cultural exchange, giving it the value it deserves in the community, reconnect with nature, observing it in all its splendour from one of the most beautiful environments in the world.