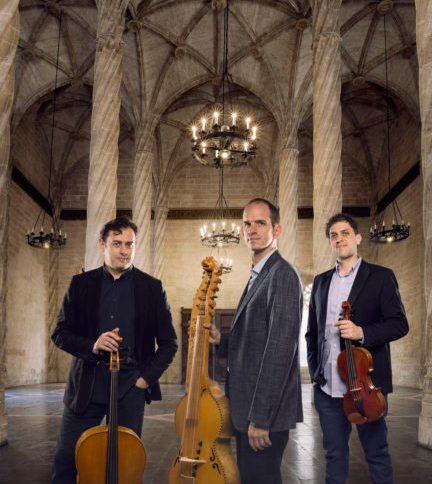 ##24/7 VALENCIA: WHAT IS THE CONCEPT OF THE VALENCIA BARYTON PROJECT?

MATTHEW BAKER: The idea behind the Valencia Baryton Project is that we’ve dedicated ourselves to ‘rediscovering’ the music written for this wonderful instrument as well as proactively looking for new music to be written for it. The instrument is a bit of cross between a viol (viola da gamba) and a lirone (a type of harp) and features 10 strings on the back that can either be plucked or just let to vibrate sympathetically with the front strings, which are bowed. It has an enchanting sound and in the 1700s was considered the peak of aristocratic instruments.

Our biggest influence is of course Haydn, as he wrote over 160 works for the baryton – all at the behest of his patron, the Prince Esterhazy of Austria. It’s a huge treasure of compositions by one of the world’s greatest composers and has been left nearly untouched since the instrument went out of fashion around 1800. But it’s been great to see new works being written for the baryton as well. We’ve already had 2 new works written by British composer John Pickup and Canadian composer Steve Zink and I’m very much looking forward to the results of a competition by the Fest Ribalt in Navarra that will feature a winning work written for the baryton in our upcoming concert there in October.

This last summer (2021) we brought the baryton to Costa Rica for what we believe is the first time ever in the instrument’s history and are now looking forward to our upcoming tours in the USA, Canada and the UK to continue to introduce this instrument to new audiences.

WHAT IS DISTINCTIVE ABOUT JOSEPH HAYDN AS A COMPOSER?
Joseph Haydn is known as one of the greatest composers of classical music and you would normally associate him with the symphonies or string quartets that are his best known works today. But Haydn was the employee of the Prince Esterhazy and he was instructed to write for the Prince’s favorite instrument, the baryton. Haydn didn’t just write one or two pieces but instead wrote 126 trios to be played with baryton (played by the prince), viola (played by Haydn), and cello (played by a court musician, often Andreas Lidl). In reality, his trios for baryton far outnumber his compositions for string quartet, traditional string trio, or even his symphonies.

One of the interesting things of these trios for baryton is that the 3 instruments have such a similar range, it actually proved to be a very challenging and often frustrating experience for Haydn to write parts that worked together. Add that to the fact that the baryton has a completely different sound to the other two instruments – more an ‘ancient’ sound, and you have music that sounds deceptively simple but writing it was like solving an intricate puzzle. These works, started in the mid-1760s, provided the tools that Haydn would need to go on to write his greatest string quartets or symphonies later on.

COULD YOU TELL US SOMETHING ABOUT EACH MUSICIAN?
Each musician of the trio has their own story but our meeting point was at the Palau de les Arts. Alex Friedhoff (cello) and I (Matt Baker, baryton) are members of the opera orchestra here in Valencia. Estevan de Almeida Reis (viola), who is now co-principal viola of the Orchestre National de Montpellier, was working with us here in the opera in Valencia for a few years. In his last year, I asked the two if they’d like to read some baryton trios with me for fun. It wasn’t meant to be anything serious, in fact the plan was to read trios then go out for a bite to eat and a beer. We had such a great time that we decided to repeat the plan…. again, and again. And before we knew it, we started down the path of forming a solid trio and the rest just flowed from there.

Alex Friedhoff not only is a cellist from the opera but also studied baroque cello at Indiana University and this has made him an invaluable member of the trio with all of his insight into this music that sits on the border of the baroque and classical styles. He can be found playing as well with Raquel Andueza (soprano) and the Trio Vanguardia but he also has a hidden talent up his sleeve – he’s a pilot! We’re just waiting for the day that he can fly us to our gigs, Iron Maiden style. We might need a bigger budget for the Boeing 747 though….

Estevan de Almeida Reis has a long history as a chamber musician, and was a member of the prestigious Quarteto Radamés Gnatalli in Brazil, where Estevan is from. He has performed alongside pretty much all of the most well-known Brazilian Popular music legends, from Caetano Veloso to Gilberto Gil and just about everyone in between. Working in the field of popular music and jazz, I immediately clicked with Estevan with this link and I think that it carries over into our work in the trio – affecting how we envision the music and our interpretation of it. Today, Estevan commutes from Montpellier, where he works with the opera orchestra there, to Valencia to continue working with us.

For myself (Matt Baker), I am actually a double bassist as well – that’s how I came to be in Valencia. I work with Alex Friedhoff at the Palau de les Arts as well as am the faculty member for double bass at Berklee Valencia. The baryton has been something I was passionate about since 2004 when I first came across the instrument while arranging Haydn’s duos for two baryton for a cello and double bass duo I had in England. In 2017, I finally had the chance to acquire a baryton and since then things have taken off. I never expected to be releasing an international CD (and for sure never expected one that was in the top 20!) but am thankful that Naxos took on our trio and am truly grateful to my colleagues for working with me on this project. The public reaction has been wonderful and I am looking forward to continuing our work on it! Beyond playing classical music with the baryton, I haven’t been able to resist the lure of jazz and in December 2019 performed the first ever jazz baryton concert (that I know of) with pianist Baptiste Bailly. Since then, I’ve been seen with it at Berklee concerts and am looking forward to using it in a few new things I’ve got planned.