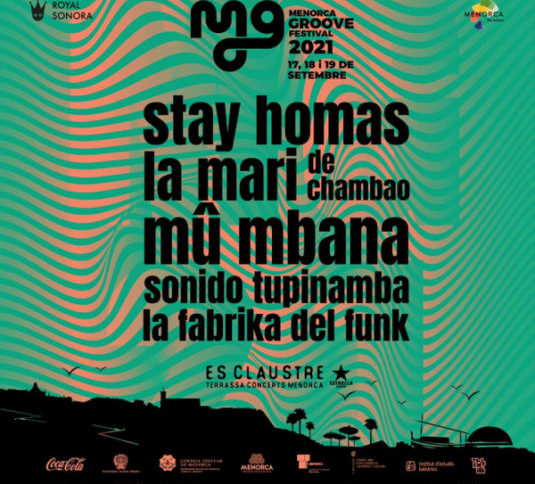 ##From September 17 to September 19, 2021, the ‘Menorca Groove festival’ will be taking place for the fifth time at Es Claustre in Mahon, Minorca, Balearic Islands, Spain.

The festival is brought by the organisers of the Formentera Jazz Festival and the people behind the space in ‘Es Claustre’. Described as a ‘Perpetual motion, just like the waves of the Mediterranean sea,’ Menorca Groove aims to bring a festivity to September by creating a party-like atmosphere to celebrate the end of August before working life in September begins.

Those wanting to celebrate in Minorca will find that there is a range of musical sounds to please all musical tastes at Menorca Groove. These sounds include reggae, funk, tribal music, soul, dub, electronic music, fusion, and groove. This variety of music has come about from a varied lineup of musical artists, with many of these performers being up and coming musicians, staying true to the festival’s philosophy to promote those people who are new to the musical scene, alongside including established musicians.

The group Stay Homas is set to be the festival’s headlining act, performing on Saturday, September 18, 2021. The band consists of three friends, who perform their songs in a mixture of English, Spanish and Catalan. As a trio they are shown to use their innovative thinking through their performing, initially recording songs using a guitar and a metal bin as their backing sounds.

Keeping Stay Homas company in the music line-up on the Saturday is La Fabrika Del Funk. A DJ who specialises in Latin, Afrobeat and Dub music.

La Fabrika Del Funk is not the only DJ performing at the festival. Sonido Tupinamba, is set to close the night of Friday, September 17, 2021 and similar to La Fabrika Del Funk, is a DJ who uses different Latin beats.

This DJ is not the only performer set for the first night of Menorca Groove. Performing live is La Mari De Chambao, the legendary singer from Málaga, Spain. She is the leader of the heavily influential and award-winning band ‘Chambao’… pioneers of ‘Flamenco Chill’ music.

The final night and day of the Menorca Groove festival is on Sunday, September 19, 2021. This day will see a new set of acts taking the stage including Mû Mbana. Of a Guinean descent, Mbana is inspired by and fuses jazz, traditional music, and the spoken word to create thought-provoking songs.

Whilst the festival is set to be a musical and dance event that celebrates the joys of life, those attending will also be able to visit and take part in a number of different events.

This year, the festival is hosting the first edition of Menorca Talks. This is a conference which is aimed at looking at the educational factor of the music industry. The new event added to the festival will include a panel which is called, ‘From Training to the Stage: A Tailor-made Course.’ Through the panel discussions are to be had about the challenges that can be found by those working within the music industry and the problems found with creating musical content. During this panel, a number of guest speakers are set to take part.

As the weekend leading up to the festival approaches, the events occurring within, and the musical line-up set reveals a weekend aimed at inspiring others and celebrating unity.