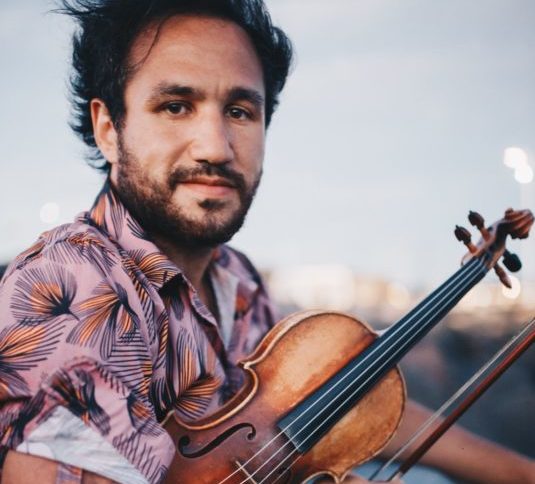 ##1. 24/7 VALENCIA: Tell us something about your upbringing, musical background and education…

FEDERICO NATHAN: I was born into a family of musicians and my father is also a violinist, which is why it was decided that I would play the violin too. So, when I was 8 years old I started to play the violin… because of him. However, by the time I was 13 years old, I wanted to switch to the electric guitar or drums. At the time, all I was really studying was classical music and I was “super bored” by the genre. When I started to really explore the electric guitar and drums…it was then that I realized that I actually really liked the violin!

I was a bit lost, musically-speaking, in terms of what to do with the violin. I started to experiment and seek different sounds with the electric violin, including rock music and classical music and other types of music too. This was not so typical for someone in their early teens in Uruguay back then. Most violinists of that age in my country were playing in classical orchestras.

When I started to discover just how many sounds you could create with the violin…I started to appreciate classical music more than ever. I also started to get into jazz too.

With the kind support of the family, I had the good fortune to study abroad. The history of the violin, its technique and deep traditions are connected to Europe. So, that is where I headed! I left my country and I went to study at ‘Reina Sofia’ in Spain and had a great teacher in Madrid.

Back in Uruguay, I had sometimes escaped from my studies (laughs) to partake in jazz jam sessions. Curiously, my classical teacher there had warned me off from getting involved in jazz. This created some inner-conflict…

However, with hindsight, I’m glad that I didn’t take on board what my violin teacher said to me and I really got more into jazz by the time I went to the United States and studied at ‘Indiana University’ and that is where I really discovered jazz on another level. I was fortunate to study with the late, great David Baker (1931 -2016). He was a living legend when I was there and he was a great teacher and mentor too. I have retained my love of jazz ever since that time.

After that, I moved to Berlin and I studied there and that is where I discovered different types of music and became very interested in the possibilities of the violin in terms of sounds and also its potential as an instrument for writing music.

2. Describe working at Berklee Valencia …
Variety is one of the nicest things in life and that is what I have found at Berklee. There is no typical year there. To be a string player in an institution like Berklee is not so much about the typical classical traditional approach. Berklee Valencia is also interested in the technological & production aspects of making music and exploring different genres of music too…like Jazz and Mediterranean music, for example. This attracts interesting people from around the globe, coming to study in Valencia, in terms of its students. This refreshing and dynamic approach is reflected with its choice of staff too.

6. Is Jazz becoming a strange ‘Blues’ for the 21st century? Tell us about the art of improvisation…

A lot has been said about Jazz becoming something else for the 21st century. However, it is good to remind ourselves that improvisation has always been around. Everything that is created, not just in art, is accumulated in a way… and is the product of moments of spontaneity. You could say that when a moment of improvisation is defined in music, it becomes a composition. In terms of musical genres, Jazz is one of the purest expressions of improvisation because it is mainly about that process. For me, art is about trying to bring some sort of beauty into the world. It could be ‘Art Deco’ or it could be Jazz music or Tango or Classical music and more…

7. How do you find Valencia?
I travel a lot for musical projects so I am in Valencia for a limited number of months of the year for work reasons. My travels also take me to Holland and South America. However, I can say that I enjoy working & playing in Valencia a lot. I’m looking forward to staying more in the city. As a musician, I think there are great things happening here. When I saw the size of Valencia, I didn’t think I was going to find a really intense cultural life. Infact, Valencia is an area full of original artistic ideas with gente who are developing interesting & innovative projects…that surprise me in a good way. It’s also attracting the kind of people who have good ideas and it is making the city an even richer place, culturally.

8. Could you tell us about your recent projects / albums?
I’m really looking forward to releasing my new album ‘Bardo’, which is out next month. I recorded it in Rome last year but the promotion was delayed due to the COVID situation. I recorded the album with my favourite crew of musicians, which is Baptiste Bailly on piano and Diego Piñera on drums. He is one of the best drummers in the world, in my opinion. The band is called ‘Federico Nathan Project.’

With my ‘Cuareim’ string quartet, we are soon going to record our third album together… about the story of Jazz. I’m really excited about this project. It’s a difficult one to keep alive as we all live in different countries. Also, COVID has meant rehearsing has been difficult and concerts have been cancelled too. However, when we do get together it’s very exciting. Nowadays, it’s very difficult to find string players with such quality and versatility.

I have also started a challenging new project with Lucia Conde, who is also my wife. It’s a beautiful dialogue between dance and music. It’s intimate and intense as we are 3 dancers and just 2 musicians. At the end of October, we will be doing a premiere of the show in Valencia and Madrid. Later, we will go to Amsterdam and then South America. The story of how I met my wife-to-be is an intense one. I had finished a previous relationship in the month of October and felt destroyed by the break-up. I then met my future wife in November… and we got married the following January! Suddenly, we had a “deep & beautiful work of art” called Alma!

Regarding my very latest project, I have just recorded an album with the Grammy-awarded ‘Metropol Orkest’ in Holland. We did an amazing project with a huge UK pop star. I’m not allowed to say his name yet but it will soon be announced!

9. What is the difference between playing live and recording in the studio?
Recording in the studio is more like an instagram post where you put on your best suit and want to look like Brad Pitt! Playing live is like being naked to the world and showing the audience who you really are. It doesn’t mean that recording an album is bad, it’s just different. I have to say that I find playing live is a more real experience and that’s why we miss performing so much….because of all of this shit with COVID.

10. Can you tell us more about the show coming up at Formentera Jazz Festival 2021?
I’m so looking forward to going to this beautiful festival. I will be playing songs from my new album ‘Bardo.’ So, those of you who are in Formentera will be able to enjoy some new compositions from the stage. I’m really excited about it!