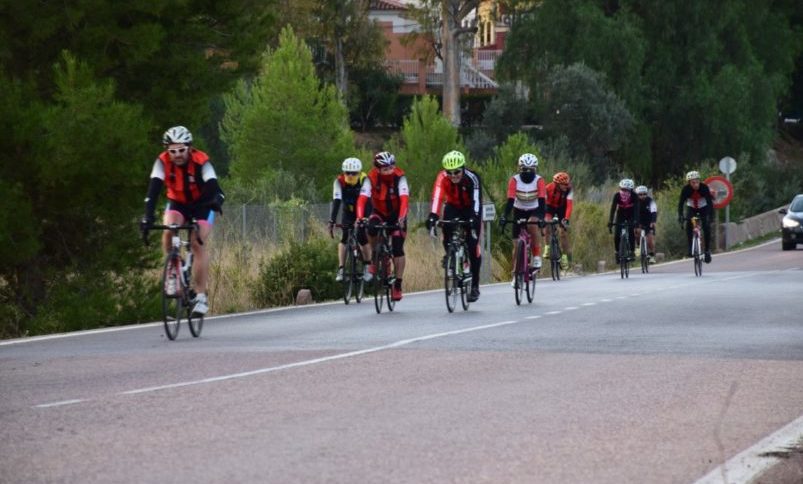 This Saturday, October 17th, at eight o’clock in the morning from the Plaza de la Noria in Massamagrell (COMUNIDAD VALENCIANA), saw the scheduled departure of the 21 cyclists participating in the First Cycle Pilgrimage “Corona de Aragon” towards the town of Albentosa (Teruel, ARAGÓN) and the end of the pilgrimage in the Cathedral of Valencia.

In the departure ceremony was Francisco Gomez Laserna, Mayor – President of the City Council of Massamagrell and Don Jesus Gimeno Peris along with Dr. Ana Mafé Garcia representatives of the Cultural Association ‘The Way of the Holy Grail’. Before the departure because of the overall health situation of the COVID-19, all pilgrims were informed about cycling safety measures and regulations on the COVID-19.

Dr. Ana Mafé has insisted on the need to join synergies from civil society with the municipalities that mark the way and, thus promote the pilgrimages on the occasion of the Jubilee Year of the Holy Chalice in Valencia in ‘El Camino del Santo Grial’.

The path of the Way of the Holy Grail was conceived by the visionary archbishop of Valencia Dr. D. Marcelino Olaechea in early 1958 between Aragon and Valencia.

At the beginning of this century, the Institut d’Estudis Valencians took again the initiative through the union of synergies between the Confraternity of the Holy Grail, the Tourist Management of San Juan de la Peña, the Royal Brotherhood of the Holy Grail and the Brotherhood of Knights of San Juan de la Peña created the Cultural Association ‘El Camino del Santo Grial.’

The cycling pilgrims have passed through the following municipalities as Puzol, Gilet, Estivella, Torres-Torres,Soneja, Segorbe, in the municipality of Altura (Castellón) have made a brief stop to take a photo in commemoration of this moment by the beauty of the landscape.

Later they continued with direction to Navajas, before arriving at Jérica in kilometer 56 of the route. They have made a brief provisioning, continued the passage by Barracas until Venta del Aire (Teruel) where they took a brief rest.

They later arrived at the municipality of Albentosa (Teruel) where Yolanda Salvador Corella, Mayoress – President of the City Council of Albentosa, received the participating pilgrims.

The municipality of Albentosa will be the beginning of the Holy Grail Way for those who wish to obtain the pilgrimage diploma issued by the Cultural Association El Camino del Santo Grial.

After regaining their strength, the cycling pilgrims made the return journey to the Cathedral of Valencia with arrival at 17:00h. On the way back, they have passed through the towns of the outward journey.

In Massamagrell, they have stopped to receive the blessing of the parish priest Don José and the ringing of the bells.

In the municipality of Emperador (Valencia) the pilgrims have been received by Alberto Bayarri Remolí, Mayor – President of the City Council of Emperador and his government team.

After the delivery of T-shirts, they continued towards Albalat dels Sorells, Meliana, Tavernes Blanques and as a final destination, the Cathedral of Valencia at 17:00… as planned.

Upon entering the pedestrian access to the Plaza de la Reina in the Puerta de Hierros of the Cathedral of Valencia, pilgrims were received with a corridor of honour by the Bugle and Drum Band Cadets of El Camino del Santo Grial de Vilamarxant and Penitence and Passion Band of Valencia.

Then at the door of the Cathedral of Valencia Rev. D. Alvaro Almenar Picallo, Cabildo Protocol and Celador del Culto del Santo Cáliz de la Catedral de Valencia and Antonio Rossi, President of the Brotherhood of the Holy Chalice of Valencia have received the pilgrims cyclists. The whole event was held following the rules of safety distance. Once the souvenir photographs were taken, they entered the Chapel of the Holy Chalice in Valencia.

Inside the pilgrims have received some words of welcome from the Rev. D. Alvaro Almenar and later from Dr. Ana Mafé, acting President of the Cultural Association El Camino del Santo Grial thanked all the people who have participated in this pilgrimage: mayors of Massamagrell and Albentosa, Massamagrell Cycle Club, Losan Optical Center and D. Alvaro Almenar.

Afer this moment in the Chapel, the pilgrims sealed their credentials with the presence of Don Antonio Rossi, President of the Brotherhood of the Holy Chalice of Valencia.

At the exit the pilgrims were able to hear some pieces played in their honour, played by the Band of Bugles and Drums Cadets of El Camino del Santo Grial de Vilamarxant and Penitence and Passion Band of Valencia.

In the words of the association: “A reason more than enough to walk the Way of the Holy Grail, Route of Knowledge…”