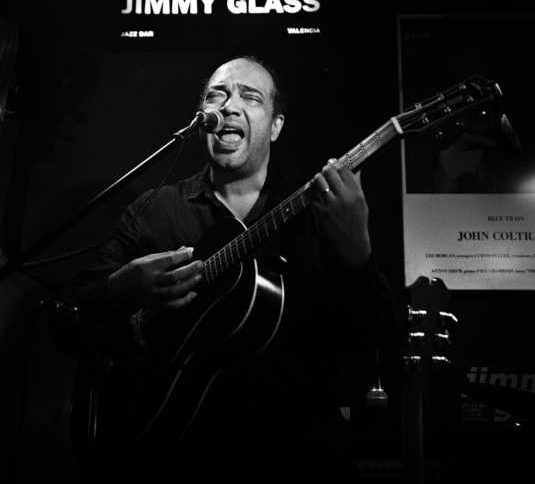 1. Tell us something about your background and experiences…

My perspective has changed over the years, and I’ve mellowed quite a bit. I enjoy wry humour, which might tempt me to frame my background as something out of an Edvard Munch painting. But that would be nonsense, and perhaps pernicious – because not only have I had it easy, I’ve also learned to reconcile contradictions where there might otherwise be divergence.

I was born and grew up in Luton, with a German mother and a Jamaican father. I think Aristotle was right when he said, “Give me the child until he is seven and I will show you the man.” At the age of seven, I was introverted and conscientious – and in that regard, I haven’t changed at all. One of the biggest changes for me since the ‘60s was from being a schoolboy to becoming a schoolteacher. But the biggest change of all was getting actively involved in music.

I’ve had many memorable musical experiences, such as performing aboard the Majesty of the Seas for Royal Caribbean, touring the UK in musical theatre (I’m a former National Youth Theatre full-production cast member), and opening for Elvin Jones at London’s Ronnie Scott’s (I lead a packed house in a round of ‘Happy Birthday’ on the night of Elvin’s 70th). However, my most valued musical experience by far is having known and spent quality time with bop guitarist Sean Levitt.

On a personal level, it’s meditation and therapy. In the grand scheme of things, it’s an opportunity for catharsis and renewal – both personal and social. It’s also about teamwork and cooperation; each individual player’s will and intention needs to be subordinated to a collective purpose, which – paradoxically – unites the group while also supporting individual self-expression. I’d rather play alone than play without shared purpose and values, because all you end up with is tribalism – a kind of ‘jazz Babel’ – with everyone playing by different rules. For me, jazz is rhythmically-nuanced, blues-infused, spontaneous melodic counterpoint. It’s the intuitive application of those rules for establishing order in chaos. I don’t care for highbrow, nor for condescension in the name of ‘entertainment’, but I have a particular aversion to the music of what Jason Marsalis has called “jazz nerds”, who only value the complex. Being self-taught, you develop an aesthetic where others may not. I once tried to explain this to an interviewer at Time Out with the old joke about a gentleman being ‘someone who can play the bagpipes but doesn’t’.

3. How do you find life being a musician in Spain?

If I were to funnel my energies into full-time music, I’d probably do it from right here in Valencia because the opportunities for creative collaboration are first-rate. But as I’m more concerned with wholeness as a person than with perfection as a professional musician, I much prefer being an amateur – in the literal sense of ‘one who loves’ – with a healthy work-life balance. I do what I have to do so I can do what I want to do, and my teaching job – at The Learning Bus – makes this sustainable and fun. I enjoy – from a distance – the blend of subcultures in the music scene here, but not at all the marginalisation and impoverishment of musicians.

4. Could you give us a synopsis of your latest album, ‘Ludwig Manhattan’s Germaican Blues’?

It’s a concept album of spoken word and songs: an exploration of the question, “Could you bloom wherever you’d been planted?” through a magical tale of Ludwig’s adventures on his journey to happiness (eudaimonia) and self-reliance.

5. Please take us through each track

Germaican Blues
An exposition of the set of events forming the back-story and introducing Ludwig.

The World is a Loveless Toilet
The story’s point of attack. Ludwig meets the mentor and reveals long-hidden resentment.

Invisibility
The background to Ludwig’s wounded underbelly and current lack of confidence.

In the Palace of Sans Souci
Ludwig receives a magical gift from the mentor, with powers enabling him to transcend the limiting conditions of his present circumstances, and proceeds to use these powers for the pursuit of decadence.

See you next Tuesday
Ludwig builds an empire of vice.

Sincerity
Ludwig is filled with remorse.

Good Company
The climax and resolution of the story. Now assertive and self-reliant, Ludwig seeks happiness through living simply but well.

6. What guitars do you use on this recording and live?

The main guitar on the album is a Godin 5th Avenue acoustic archtop with extremely heavy strings in Carl Kress tuning for a vintage rhythm sound. I also used a Sonntag Augusta J18 with a floating pick-up, and a Camps CE-800 for nylon. I use the same guitars live, except I’ve gone back to Ovation Classic for the nylon sound – acoustic amps have come a long way since the ‘80s. I also use an Ibanez AG95 (for the small body) and a Fender Squire Vintage Modified ’72 Telecaster Thinline for the range.

7. Could you tell us something about the other musicians who feature on this album?

They’re superb. The playing on the songs was done without amplification in order to honour the vintage style, although keyboard player Vicent Colonques provides just the right tone for the more modern songs and to accompany the narrative. The virtuoso double bass playing of Matt Baker really shines throughout the album, and Ignacio Aguilar’s judicious use of the didgeridoo – to mysterious and haunting effect in parts of the narrative – is simply marvellous. Turia Studios did a fantastic job of letting the playing speak for itself through the recording, but these words from the liner notes by Dave Gelly MBE are worth repeating in full: “Listen out for Toni Belenguer’s slippery trombone and Ignacio Aguilar’s blues harmonica – they’re outstanding.”

8. What is your philosophy of life?

Do you have any musical or literary plans?

Having just written lyrics and recorded a reggae dubplate for Gravity Sound System, I plan to collaborate more with the producer on other projects. But my main project is The Heartbeats, a band with a wonderful ‘micro-symphonic’ sound and a repertoire that ranges from self-penned originals (Ludwig Manhattan’s Germaican Blues and English lyrics to Brazilian classics) to Marvin Gaye’s finest, via beautiful standards by Johnny Mercer or Irving Berlin. Our flautist, María Gil, is an experienced jazz player and singer, and the musical arrangements – by French horn player Anton Tkachenko and cellist Andy-Bob Nolen – are a real testament to the virtue of openness. The Heartbeats played at the Sala Zircó and the show was a success.