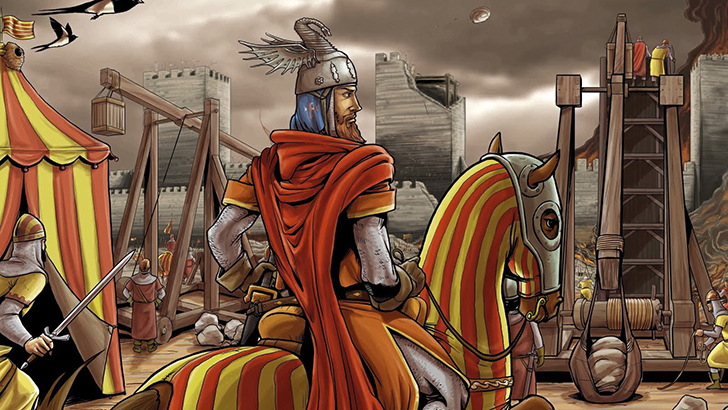 ##Jaime I, the man who re-conquered Valencia from the Moors, drew up the geo-political map of Spain’s Mediterranean coast which largely still exists today and was the founder of the old kingdom of Valencia.

Jaime, or Jaume to his friends, was the man responsible for establishing Valencia with a separate identity from its neighbours and also largely down to him is all that surreal bickering about language, water and on which regional channel you choose to watch your Claude Van Damme films, farming news and weather reports.

In 1238 after conquering Majorca, Jaime finally realised his lifelong obsession; the re-conquest of Valencia from the Moors. To the disappointment of some of his Barons this, for Jaime, was not an expansion of the kingdom of Aragon but a Crusade and his campaign had been officially sanctioned as such by Pope Gregory IX. When Majorca and Valencia were conquered, he set them up as separate Kingdoms. It took him 15 years to gain control of the whole region starting in Peñiscola working his way down to the city of Valencia on to el Puig and down to Alcoy and Alicante.

He also went on to recapture Murcia which, due to a prior agreement he handed over to Alfonso X “The Wise”, king of Castile. “Wise” he might have been but he must also have been pretty careless as he immediately lost the territory again, so Jaime had to go in and conquer it a second time. Now, losing a large part of Spain once might be considered as unlucky but losing it twice means you’re just not focusing on your job.

Nevertheless, Alfonso managed to lose Murcia once more and Jaime had to conquer it for a third time, handing it back to Castile as agreed, probably chiding Alfonso with a “Now this time make sure you look after it properly!”.

To this day, Murcia marks the border of the Valencian/Catalan speaking world and the start of Castilian Spain. If Jaime had chosen not to keep his agreement with Alfonso (something which would have been understandable under the circumstances) things might have been different.

Apart from a short 15 year gap during the rule of El Cid, the Moors had controlled Valencia for over 500 years. Jaime’s re-conquest was part of a wider campaign to recover Spain from Muslim rule which had started in Asturias. It took 800 years to completely re-conquer what the Moors had taken in just 8.

By the time Jaime arrived, Moorish rule had become decadent and divided into small kingdoms …often fighting amongst themselves. They had lost any central power or purpose and were, in the end, relatively easy prey.

Jaime was born in 1208 in Montpellier, in the south of France. He was conceived under bizarre circumstances. His father, Pedro II of Aragon and his mother Maria of Montpellier had married for political reasons and couldn’t bear the sight of each other. A courtier aware of the need for an heir got the pair drunk and managed to get them into bed together, each one conned into thinking the other was some other lover they’d been after until it was too late. Jaime’s mother died a year after he was born and at the age of three his ‘loving’ father gave him up as a hostage after losing out in a quarrel with Simon de Monfort.

He was kept in de Monfort’s castle in Carcassonne until 1213 when, at the age of five, his own father died and he was proclaimed king of Aragon. Too young to take the throne immediately Jaime was brought up and educated by the Knights Templar, this must have been a very caring environment for a small child, a bit like being brought up by the SAS.

All this trauma toughened him up, which was just as well as throughout his adolescence he had to fight off members of his own family… who saw his throne as being up for grabs. Jaime himself fought and killed his uncle Pedro de Ahonés, in his own royal palace, during an attempt on his life at the age of just 15. By 19 years of age, he had gained complete control of the Aragon crown.

Perhaps because of his unstable childhood, Jaime always tried to be a loyal and loving father and this may be the key as to why he decided to divide up the lands he had conquered and create a border between Catalonia and Aragon which previously hadn’t existed. Jaime had 14 children from three wives and a long list of lovers. All his children, even those born out of wedlock, were given dynastic or aristocratic titles. His second wife Violante wanted to ensure the future of her sons Pedro, Jaime and Fernando in detriment to Alfonso her husband’s first heir from his previous marriage. In order to keep everyone happy, Jaime elected to create a kingdom for each of his four heirs which lead him to separate Aragon and Catalonia and establish Valencia and Majorca as distinct kingdoms with their own rights (Els Furs) and Government. In the event Alfonso and Fernando died before they could inherit their kingdoms but Jaime’s two surviving heirs Pedro III King of Aragon and Jaime King of Majorca maintained the borders that their father had put in place.

Jaime had also observed the difficulties involved in ruling a large unified kingdom such as France and realised he could exercise more control over four separate smaller Kingdoms. A divide and rule policy that, catalanistas would argue, still exists today and has always benefited the central Spanish Government. Whatever his reasons the idea was very unpopular with the Catalan and Aragones nobility whose objective was the creation of a greater Aragon or greater Catalonia. A policy that, in turn, anti-catalanistas would argue still exists today. Some Catalans consistently claim Valencia and the Balearic islands as their own (something that doesn’t always go down too well in Valencia and Majorca). To this day, all four regions incorporate the Aragon crown’s four red stripes on a yellow background into their flags but each region has a separate identity often at odds with each other.

Jaime’s legacy goes further than just a few lines on the map. He populated his newly conquered lands with Aragoneses and Catalans (although, in Valencia, at least, the Muslim population remained in the majority for years to come) who brought their language with them.

Jaime made his court in Valencia and under his protection Valencian-Catalan was nurtured and given a status on a par with Latin and it was in Valencia that it first became a literary language leading to the publication of Ramon Lull’s “Llibre de les Besties”. He created a parliamentary system and institutions like the Generalitat, which still exist today. He opened the Consulats del Mar in Barcelona and Valencia, institutions which would control trade in the western Mediterranean for centuries to come.

Even today, Jaime is big news. The 9th of October, the day Valencians celebrate his victory over the Moors always brings up old arguments about language and national identity. A few years back, Jaime was in the headlines with the proposal to rename the Plaza del Ayuntamiento as Plaza Rey Jaime I. The square is a bit of a political football in itself as it has been renamed five times in the last century depending on the political climate. Jaime may be the choice that finally sticks as the only person who can unite the wide spectrum of Valencian opinion.