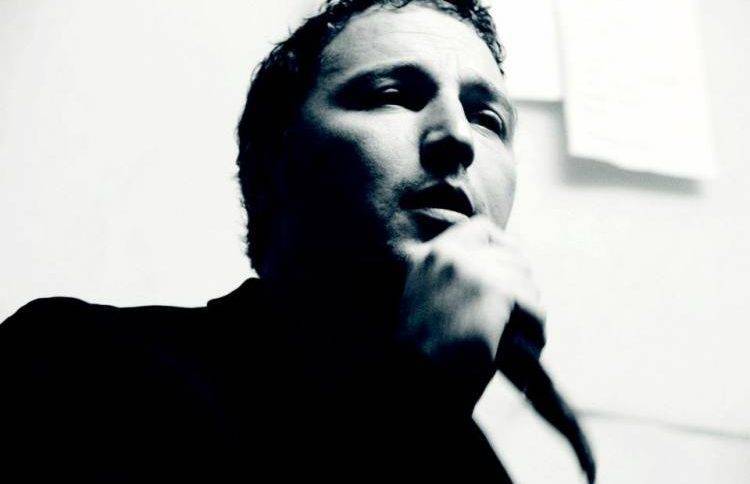 It’s not the apathy in me
It’s not the clumsiness in me
My rusty self unavailable, irreclaimable on this Spanish beach

Eloquence & style won’t save me in this town
Sea, sun for free
Sex? Well, the tanned brunettes won’t lay an eye on me…”

1. Could you tell us something about your background and experiences…

I was born in Birmingham (UK) in the mid-seventies, grew up on the outskirts of Paris. I spent many hours in Parisian
libraries, some have amazing reading rooms. And I have now been living in Valencia for the last 10 years.

2. Has your cosmopolitan upbringing shaped your view of the world?

Well, my dad speaks French with a Spanish accent. My mum speaks French with an Irish accent and I speak Spanish with a French accent! I may have drawn strength from being at home in a variety of contexts. I spent summers in Gandía and Castellonet de la Conquesta (small village in La Safor) as a teenager, but also in Birr (Ireland). I feel Parisian but with Irish and Spanish blood in me.

3.What are your influences?

Rented rooms. Second-hand clothes. Living one’s life to the full. Life’s infinite capacity to surprise, confound and after painful adjustment, open new doors. Musically, I vividly remember the day my older brother brought home the vinyl of The Smiths “The World Won’t Listen”.I hadn’t heard the music yet but I was already captivated by the record sleeve. There are key concerts in my life: first solo Morrissey concert in Paris in 1991 at L’Élysée Montmartre, the band was slightly under-rehearsed but Morrissey was flamboyant and magnetic.

Fishbone live in Paris (Élysée Montmartre again) the singer Angelo Moore is a high energetic beast on stage, I was highly impressed and was left sweaty as I was exiting the venue. There are many more: Jeff Buckley, Happy Mondays, Depeche Mode (‘World Violation Tour’), Noir Désir and Jack . Suede and Blur I saw 8 or 9 times live, a great admirer of their work. These days, I think I have pretty eclectic tastes. I can appreciate a Stock, Aitken & Waterman production and then listen to a Jeffrey Lee Pierce bootleg.

A film? “Big Deal on Madonna Street” (1958) by Mario Monicelli. Actors? Alain Delon (in the seventies at the height of his pulchritude), Gena Rowlands, Monty Clift and Marlon Brando. A book? At the moment, I’m enjoying “The Big Midweek: Life Inside the Fall” by Steve Hanley.

4. How do you find Valencia as a place to live and work regarding music?

Well, the cost of living in Valencia is lower than other places, for a start. That helps. Now actually making money out of music seems like a distant illusion. But there’s a necessity in me to express myself this way, through music so I continue… There’s a pretty vibrant musical scene, lots of interesting bands, bars: Café Cerati, La Fabrica de Hielo and more.
Regarding Valencia, it’s a fairly small city, making it very accessible. I like to walk around a lot, the River Turia especially, with no precise destination…looking for inspiration. Or drinking a good Rioja, soaking up the Mediterranean sun…

5. Could you take us through each track of the latest album ‘Eat your Make Up’ by Le Garçon Rêvé

6. What are the themes of your debut album “Songs for Mediocre Men Vol 1.”?

Urban alienation, isolation and trying to keep the faith are my main recurrent themes. After Megaphone Ou La Mort’s split, I wanted an evocative title for Le Garçon Rêvé’s debut album. When Diego (guitar player in Le Garçon Rêvé) played me his demos, the title of the album came first. All the songs sounded like hit singles to me, like a best of, that’s the reason for the ‘Vol. 1’.

7. Do you have any literary or musical plans?

Promoting ‘Eat Your Makeup’ wherever they’ll receive us… working on a 3rd record, I presume. Apart from that, I appear on Stéphanie Cadel et la Caravane’s second record as well as on Boémia Vadia’s debut album. We have a new documentary about ‘Le Garçon Rêvé’ out in 2020…