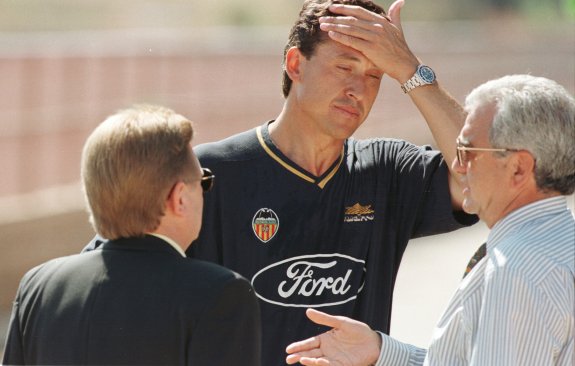 ON REPLACING ‘LUIS ARAGONÉS’ AS MANAGER
“I arrived to replace the much-loved Luis Aragonés who was a very effective coach. And all my efforts were to consolidate the team defensively but that approach did not gel with the team as I would have liked. We became more consistent, but we found it hard to be positive. My arrival disrupted something, but it had more to do with the charisma and counter-attacking style of Aragonés. Then the image of Luis was ‘updated’ with the Spanish national side, but throughout his career as a team coach he was the king of the counter-attack. I was aiming for something different, but it was difficult for me with the team I had inherited from Luis.”

ABOUT VALENCIA AS A CITY
“Valencia seemed to me a fascinating city, a place to stay in all your life, but to enjoy it fully you would have had to win two games in a row, and there was no way of that happening. There was a small restaurant near the hotel where I lived, on the Gran Via Marqués del Turia, the ‘Pilsener’ it was called. I went there every night with a close collaborator.”

LOCAL LAD ‘FARINOS’
“A local lad with a very powerful personality, a player with a very wide range of skills. I encouraged him and he got motivated: in his first game he wanted to take a penalty instead of Burrito Ortega, and we had to put the brakes on him. But I liked that… daring to lead. Daring is one of the most powerful weapons that young people have.”

THE LEGENDARY ‘FERNANDO GÓMEZ COLOMER’ (533 OFFICIAL MATCHES WITH VALENCIA CF OVER 15 YEARS)
“The same thing that happened to me in Real Madrid with La Quinta del Buitre: that things in soccer begin and end. I would have loved to have found him in his prime, but he was getting past his prime and it was up to me to manage that. And it is never easy in that situation.”

THE FLAWED GENIUS OF ‘ROMARIO’
“Yes, it was a real shame that I couldn’t take advantage of his genius in one official match. In training he was fascinating for us, in the pre-season matches he was as creative as I imagined he would be, but in the Trofeo Naranja, because he was over-motivated, he suffered a serious muscle injury (after an overhead kick). I remember that he passed by the bench, on top of the stretcher, and I said to Giráldez (the physical trainer): “Out on that stretcher they will take me too!”. And, indeed, I lasted three games more with Valencia CF and with Romario out injured and unable to play.

Also, I was fired for lining up five non-EU players for Valencia CF in Santander. The first two League games were played without any of the great talents: neither El Piojo, nor El Burrito, nor Romario. They were all with their national teams, and in the third match I committed an unforgivable clumsy mistake. The delegate, Juan Cruz Sol, was also fired. Yes, I deserved to leave the club, but Sol in no way because he is a true life-long representative of Valencia CF and a wonderful person too.”

APPRECIATION OF ‘ZUBIZARRETA’
“Zubi showed himself for what he is: a grown up person and a mature individual. His authority was such that, on one occasion, he saved my professional life. The club was ready to throw me out, the president was I don’t know where. Zubizarreta took his car and went, out of the city of Valencia to meet the president… miles and miles away. He spoke to him in clear terms and fought my corner for me and I continued to work as a coach for a while longer”.

RELATIONSHIP WITH PRESIDENT ‘PACO ROIG’
“The president was much more complicated, we had several disagreements, and even so we ended up on good terms. I met him by chance a few times and he was very kind. The world of soccer takes many people to emotional extremes where they don’t recognise even themselves.”

ON LEAVING FOOTBALL MANAGEMENT FOR GOOD
“First of all, I left it because it is a very absorbing profession. To train you have to dedicate your whole life to it. It is very difficult to think of anything else when you have to manage 23 players, mediate before the media, deal with outside influences… the fans… And I’m far from being an obsessive personality, I’m a bit more scattered. If I lived three lives, I would dedicate one to training. But living only one, no. Then it also happened that my position, first as sports director and then as general director of Real Madrid, took me away from the profession. There were some important offers that made me hesitate and consider returning to football management, but not enough to fall into the temptation of actually returning.”