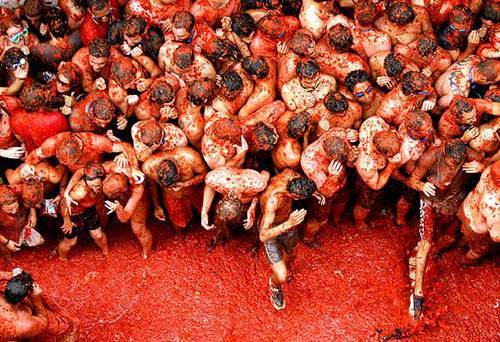 ‘La Tomatina’ is probably the world’s biggest and certainly the messiest food fight. So when I heard that they were organizing a coach trip, I jumped at the chance to go. I have never experienced anything like it in my life, thousands of people crammed into tiny streets. Mental! I mean I’ve read about it in various guide books, but nothing prepared me for the real thing.

We meet up with the party at 08:45h outside the Palau de la Musica for the short coach ride to Buñol and arrived at about 09:30h in the morning. We followed the crowd down to the town centre, which was already heaving. It was like an invading army swarming down into the town… from every street and lane… more and more people pilled into the crowd. The more experienced were wearing goggles. I even saw one person wearing a snorkelling mask!

All the buildings were covered in plastic (to protect them from the tomatoes). The locals were all on their balconies and rooftops watching the invaders.

Once we got into the main street, things really started to heat up. The only relief from the heat was when one of the locals would throw a bucket of water on us from the safety of their roof. When this happened the crowd started to go mad, chanting Agua, Agua, Agua. With so many people the buckets of water weren’t really sufficient, some people had hooked up hoses and were dousing the crowd, that’s when things really took off. Men started ripping off each other’s camisetas (t-shirts) and within minutes a fully fledged t-shirt war was underway. The sodden camisetas became the first weapons of the invaders.

The streets had lights strung across them, because ‘La Tomatina’ is a week-long fiesta. But within 20 minutes each string of lights looked like bunting, with more ripped t-shirts than light bulbs hanging from each string.

The smell of so many people was starting to really staring to fill the air, but it wasn’t possible to do anything about it, there was simply nowhere to go. It took my nervous gang fifteen minutes to move from the centre of the road to the pavement. We did this in the vain hope of evading the growing Guerra de Camisetas. After about an hour, we were totally wrapped up in the fight, moving to stand under water when possible and throwing the camisetas at everything and everybody. This is strictly against the rules by the way, you are only supposed to throw squashed tomatoes.

Then the cannon sounded, this was the cue for the trucks bearing the tomatoes to fight their way through the crowd.  Each truck carried about 25 people on the back of it and about another 10 people hanging onto the sides, trying to climb in. The people in the back of the trucks were throwing great handfuls of tomatoes at everybody they passed, no one was safe.

The crowd went wild, the ground was covered in slippery tomato purée and people were picking up great big handfuls and chucking at first nervously at the people they knew, but by the time the second truck arrived, it turned into every man for himself.

By the time the third truck arrived, we were standing in tomatoes up to our shins. People splashed it with their feet, picking it off their bodies, clothes, heads, other people’s backs and chucked it indiscriminately at everybody and everything.

As soon as the second cannon shot sounded people stopped, we were now barely able to stand. The crowd fell silent for about a minute and slowly noise started to build as friends separated in the fighting met up again and began to laugh at the ripped clothes and  people covered in tomatoes around them. Some people lay down on the road reluctant to leave.

As we made our way back to the bus, things fell silent again. Somebody stopped us to take a picture of us. I was drained, dazed and dumbfounded at to what had just happened. I would have believed it was a dream if it were not for the tomato juice running down from my face… and the tomatoes under my feet and in my shoes squelching between my toes with each step.

I am looking forward to the next outing on August 31st! It is a good way to see the best that the Valencia region has to offer. Organized by people who know the region and all the great festivals. You don’t want to miss out!