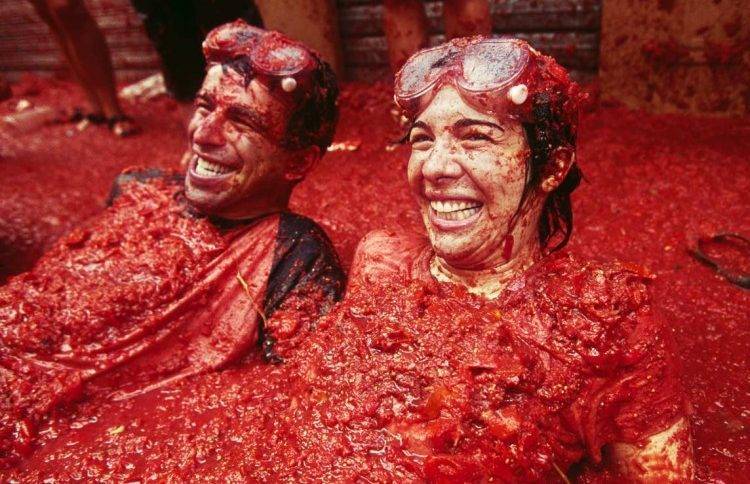 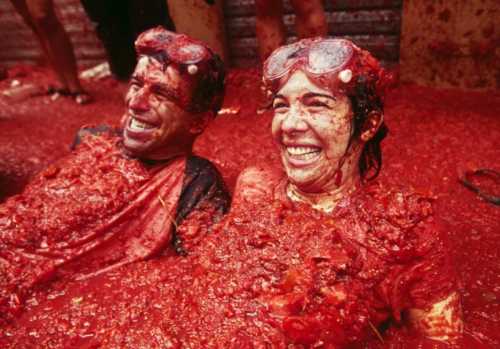 ##’La Tomatina’ is one of those annual world events that attract enormous amounts and ever increasing amounts of travellers to Valencia. La Tomatina takes place in the normally sleepy village of Buñol about an hour from the city and is a magnet, not just for backpackers and young people taking their year out, but for people of all ages who just want to experience the world’s biggest food fight. This is no ancient festival celebrated for hundreds of years by the villagers, it is officialy said to have begun in 1945. With that in mind, you would think it would be easy enough to find out how its started but it is the stuff of legends already… with several competing stories of its origins. Theories over the origins of La Tomatina include a lorry accidentally spilling tomatoes, a food fight between friends, local councillors being pelted by disgruntled locals, a tuneless busker being splatted and an ‘improvisation’  during a carnival parade. Revolutionaries will be interested to hear that a youthful and delinquent ‘class war’ has also been cited.

Due to it having no religious meaning, the humourless dictator General Franco chose to ban La Tomatina for a time. It is here now and getting so big and so popular that it is hard to see how the village can sustain (and contain) it! It has been estimated that thousands and thousands of people will throw a total of 125 tonnes of tomatoes at each other. Buñol is a small village and really it is hard to see how this part of their week-long fiesta can expand much more, but every year the numbers attending are larger and break the previous record.

Many people travel to the hour-long food fight expecting it to last all day but it begins after someone has managed to get a leg of Jamón Serrano by shinnying up the soaped pole. The minute someone is lucky or plucky enough to grab the ham, a cannon shot heralds the arrival of the lorries carrying not just the tomatoes but revellers from the village, who pelt the hot and wet crowds with the tomatoes and battle commences.

Whilst the soapy pole is being attempted, more and more people arrive in the streets and in the intense heat people actually welcome the water being sloshed over them from the balconies above. The ‘La Tomatina’ battle rages for exactly one hour of mayhem with goggled and fancy-dressed ‘crazies’ from the four corners of the world throwing tomatoes, bits of clothing and other sundry items at each other, it is a frenzied hour and all good dirty fun.

Within minutes of the start of the battle the fiesta lights strung across the streets begin to look more like bunting, garlanded as they are with soggy, dripping T-shirts. At the sound of the second cannon, fighting stops and there is a momentary hush as people struggle to stay standing in the shin-deep tomato puree and wipe pulp, skins and seeds from eyes and crevices. Then the noise begins anew as people laugh at the state of each other and others lay in the mess laughing. I have heard the experience described over and over again as a drug rush, a mad bit of crazy, eccentric fun, and that really is what it is. I have yet to meet anyone who hated it.

Buñol puts on a miraculously good-natured show each year, no price-hiking for food, drink or merchandise. The villagers genuinely seem to have great fun cheerfully helping revellers to clean up with hoses and buckets of water all over the place as you leave. I have heard so many times from visitors from the U.S., Australia, New Zealand and the UK that were it to happen in their towns/countries… there would be aggression and danger. Not so here in Buñol. It is just a good excuse to have fun.

A little known fact about ‘La Tomatina’ is that they try to break the record for the clean-up  after the battle. One year they took just one hour to clean the village (and we are talking spotless), 36 volunteers were helped by the residents of the village to get Buñol clean for the rest of the fiestas and to look like there had never been 6 trucks carrying 125 tons of tomatoes to throw at thousands and thousands of people! 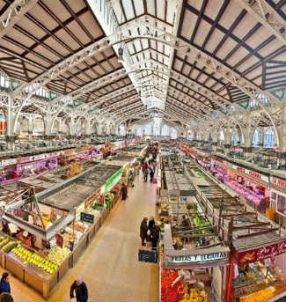