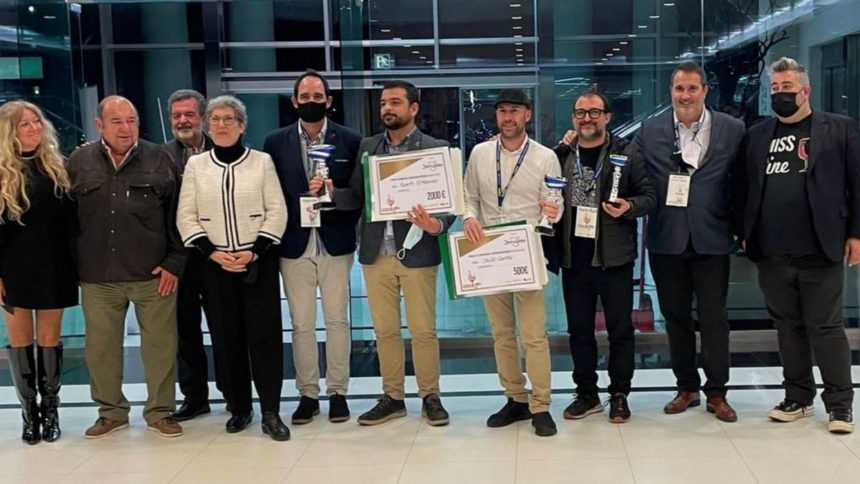 As in previous years it was a multi-faceted event with a ‘Showroom’ comprising several bodegas, importers and/or distributors showing a range of top Champagnes and Cavas. The event is aimed at professionals from the wine trade, hostelry, the specialised press and winemakers and combines not only the showroom but also a tutored tasting of wines from Corpinnat (a grouping of former DO Cava makers) now making aged cavas to a strict set of rules and the annual competition amongst ‘sumilleres’ (in Spanish) to identify the best taster in a blind tasting competition with a winning prize of 2000€.

Doors opened at 12.00pm with the showroom being available until the event closes at 20.30pm.

We commenced with a visit to the stand of Pago Vera Estenas and a chat with Fali Martinez who was showing his cava, for the first time with its new ‘Pago ‘label’ and presentation box. We also visited the stands of Cava Bodega of the Year and third best Bodega in Spain, Hispano+Suizas as designated by ‘La Razon’.

Next stand was that of Mariano Taberner from El Ponton who was showing his range of ‘Ancestral’ wines most of which are exported to a growing number of countries.

The making of Cava commenced in Cataluña in the 19th Century so our next visit was to taste the range of wines from the House of Roger Goulart from Barcelona, founded in 1882. We enjoyed an organic cava as well as Reservas and Gran Reservas going back to 2014.

As well as providing the wines for the tutored tasting Corpinnat were showing a range of the wines from Penedes which make up the group. In particular, we enjoyed the Terrers and Serral del Vall Brut Natures from Recaredo and of course the Gramona Llustros and a monovarietal Xarel-Lo.

From Champagne, we tasted three wines from Maison Phillipponnat whose vineyards are in Ay and which dates back to the 16th Century.

One ‘oddity’ we enjoyed was a Cava from Penedes whose liquor d’expedición was a Palo Cortado sherry, a Xarel-lo, Colet Navazos is an Extra Brut with a decidedly Jerezano touch!

For the ‘Sumilleres’ affiliated to FASCV, the main part of the day is devoted to finding the best taster of sparkling wines. The competition has run for several years now and is in two parts. The first, during the morning, is a blind tasting of five wines and an exam phase for all entrants, drawn from across all the affiliated Associations of Sommeliers in the Valencian Community.

Later, during the afternoon, the top ten form the finalist group who are asked to taste five sparkling wines blind, evaluate them over fifty minutes, writing a tasting note, identifying varieties, country of origin etc. The competition was moderated by Mari Lu Martinez, former President of FASCV and prizes were awarded by current President, David Remolar Ramos.

Finally, the Corpinnat tasting took place at 13.00h. 10 wines were shown in what was to be an exceptional tasting, tutored by Ton Mata from Recaredo and Paco de la Rosa from Torelló. This was another educational event as well as an opportunity to catch up with many friends and acquaintances who have been unable to do this for a couple of years.

Riki Wigley and Marian Darás
VÍ Vid is a project supporting the development of wine knowledge and gastronomy in the Valencian Community. We run wine clubs, give tastings of Valencian wines in English and support wine-makers and bodegas directly. We can be found in Instagram (Vivid8402), and through our blog VÍ Vid at https://vvidblog.wordpress.com, in Facebook, (https://www.facebook.comVivideventos) and in Twitter @vividvinos