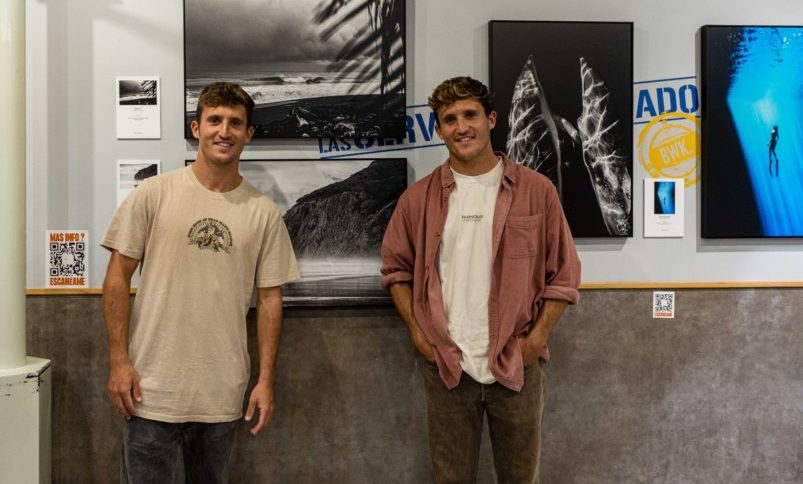 On Monday 17th October Las Cervezas del Mercado de Colón welcomed “Twinfilms” for their exhibition, “La Luz de los Océanos”, an ode to oceans around the world. The Valencian twins behind the “Twinfilms” project, have travelled the world as photographers and video producers for large corporations such as Redbull, Arenal Sound, Blue Banan, Rip Curl, Estee Lauder and the Valencian Satorisan. They began their audio-visual career at CEU San Pablo in Valencia and, at twenty-five years old, have already gained eight years of experience in their field. Javier is more organized and works as a scriptwriter and producer. José, as the artistic one, focuses more on art direction, photography and creativity. They are always together but they each contribute an essential and unique part to “Twinfilms”.

Spending so much time underwater has allowed them to capture this world in all its beauty. They say they have almost lived more in the water than out of it! “With photography we try to capture our perspective and share what makes us fall in love with the big blue,” they comment and add: “We are lucky to have been raised in a family with unique values, which make us who we are today. Respecting and appreciating the oceans is something that gives you the power to enjoy and be happy, being part of them”.

The exhibition is therefore both a tribute to the oceans and a call for their conservation and protection. In “La Luz de los Océanos”, you can appreciate unique moments of Mentawaii and Bali, in Indonesia, the Spanish beaches of Berria, Ibiza and Xavea, as well as the immense Costa Rican coasts. They have also immersed themselves in the seas of California, Komodo and Miami; in the Caribbean islands of St. Martin and St. Barth, without forgetting other more Mediterranean coasts, such as the French or Italian ones.

Since 1992, Bierwinkel has been the European beer import and distribution company known for excellence in Spain, selecting the most emblematic beers of all types, fermentations, colours, alcoholic graduations, formats and origins of each country, making them well known within Spanish culture.

By 2002, Bierwinkel had created their own Finest Beers Selection, joining forces with the Belgian brewery, John Martin, SA. In 2010, they were joined by German brewery Dinkelacker and Sanwald and the Belgian breweries Huyghe, Bosteels and Belgoo Beer. A few years later, the breweries Het Anker and Chimay joined with the aim of consolidating and expanding this unique and select Joint Venture brewery for Spain.