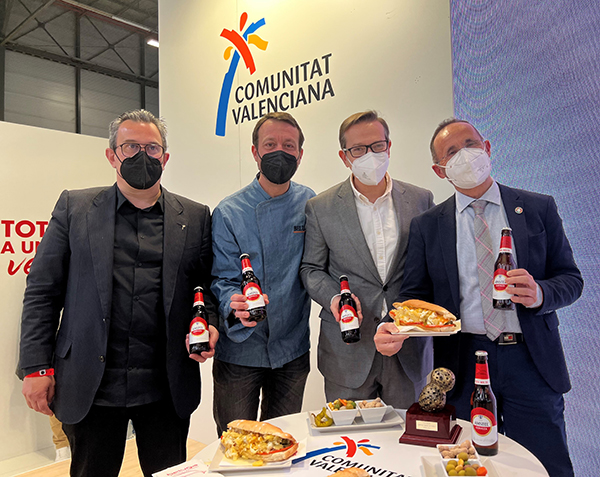 #This week has seen the presentation of the ‘Premi Especial Amstel Cacau d’Or’ at the Comunitat Valenciana stand at the International Tourism Trade Fair. Since 2015, the ‘Premis Cacau d’Or’, created by La Comunidad del Almuerzo with the support of Amstel, has honoured the best lunches in the Region of Valencia, a gastronomic and social phenomenon, unique in Spain, the evolution of the mid-morning lunch break that farmers used to make in the past.

This year, the new ‘Premi Especial Amstel Cacau d’Or’ (Special Amstel Cacau d’Or Award) has called for a competition in which nearly 300 restaurateurs have participated to create the ‘Quart de Poblet’, a new recipe within the iconic snacks of the Valencian esmorzar. The winner presented their proposal at FITUR.

At the invitation of Amstel and at the invitation of the Regional Ministry of Tourism, FOTUR (Federation of Leisure, Tourism, Gaming, Recreational Activities and Related Industries of the Valencia Region) and L’Exquisit Mediterrani, the Valencian lunch brought flavour to the third day of the International Tourism Trade Fair today.

Tourism and gastronomy are increasingly going hand in hand. And the Valencian Region has a delicious attraction, which today has been given prominence on its stand at FITUR, the International Tourism Trade Fair, by Amstel, FOTUR and L’Exquisit Mediterrani. It is l’esmorzar valencià, which today has fuelled this sectorial meeting that is being held in Madrid until Sunday.

It has become a transgenerational and democratic tradition, bringing together friends, family and colleagues around the table between 10am and 12:30pm in all kinds of bars and restaurants in the three Valencian provinces. It derives from the mid-morning stop that farmers used to make in the past to regain their strength and involves a whole ritual, starting with pickles, tramussos and cacaus de collaoret as starters before giving way to a generous sandwich, generally accompanied by fresh beer, and concluding with a cremaet coffee.

All this makes it a gastronomic singularity, practised by thousands of Valencians every day, which has no replica in any other part of Spain and which Amstel has been promoting for years. One example is its support for initiatives such as the Premis Cacau d’Or, awards created in 2015 by the digital community #LaCulturadelAlmuerzo with the backing of the brewery.

Each year they distinguish the best esmorzars of the Comunitat and in 2021 they have delivered the new Premi Especial Amstel, awarded to the best recipe of a competition among nearly 300 restaurateurs to create a new snack, ‘El Quart de Poblet’, in tribute to the town where the only factory of a big brand brewery that produces its products in the Comunitat Valenciana has been located for decades. A deep-rootedness and contribution, both to the economic and social dynamism, that builds Amstel’s strong link with the region.

Sergio Expósito, manager of the Cafeteria Bar Beluga and winner of the award, has shown the recipe distinguished with this award in a presentation in which Pablo Mazo, Regional Director of Institutional Relations of HEINEKEN Spain, brewery family in which Amstel is included, together with Víctor Pérez, President of FOTUR and Bartolomé Nofuentes, First Deputy Mayor of Quart de Poblet, have participated.

The event vindicates l’esmorzar valencià as a gastronomic and tourist attraction to be discovered, capable of attracting a new public looking for genuine experiences full of local character, with the flavour of things well done.