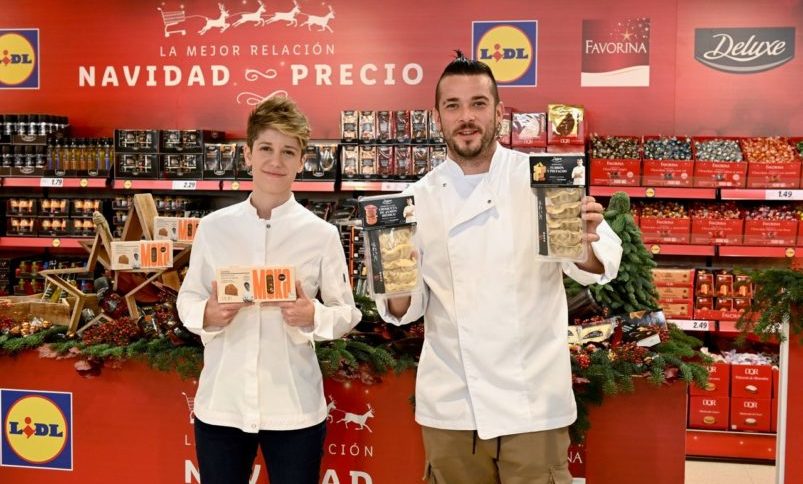 “LIDL’S NEW CHRISTMAS RANGE: A SYMBOL OF ITS COMMITMENT TO THE CONSUMER AND THE DEMOCRATISATION OF GOURMET GASTRONOMY AT CHRISTMAS”

Lidl is offering wide range of gourmet food for your Christmas tables, with more than 600 products and 20 product categories at the best price. The range contains 159 new products, among which we can find the Galician scallops au gratin, Iberian sirloin steak, smoked olive oil or the ‘caprices of cecina de bierzo’. This year, Lidl has collaborated with Michelin-starred chefs Carlos Maldonado and Vicky Sevilla to surprise the world with their new products. Together with Carlos Maldonado, winner of Masterchef 3, Lidl has created the original, limited edition ‘Gyozas Deluxe’. With the youngest chef to receive a Michelin star, Vicky Sevilla, they have created the product that no table should be without at this time of year: original nougat, inspired by the recipe for grandmother’s cake.

Lidl continues to support the origin and quality of the Spanish product with more than three quarters of products made by small and medium-sized national suppliers. Over the last 10 years, Lidl has exported Christmas products manufactured in Spain for its own brands worth more than 50 million euros.

Once again, Lidl are firmly committed to bringing premium gastronomy closer to the consumer during this special season and year after year it has been a sales success in the category, with which, in addition, Lidl reinforces its commitment to national suppliers and to the Origin Spain product.

In addition, some of the featured products for this Christmas season have the Protected Designation of Origin and Protected Geographical Indication seals, as well as other international awards.

Among the products that have won international awards for their excellent quality and flavour are many of the cheeses offered in Lidl’s wide range of products, such as the Pedro X Quesería Aged Cheese (WCA Gold), Black Olive Cheese (ICDA Bronze) and Sheep’s Cheese (ICDA Bronze) or the Black Garlic Sheep’s Cheese (ICDA Silver), among many other varieties that have also been recognised. This milestone shows the company’s winning commitment to fuse tradition and innovation on Christmas tables.

In addition to the cheeses, this year 159 new products of national origin have been created, including the duck mousse with orange, Galician-style scallop au gratin, Iberian shoulder cut from beluga pigs, Iberian acorn-fed shoulder cut, smoked salmon tartar, Iberian ham omelette with boletus mushrooms or Iberian sirloin steak, among many other options.

With Lidl’s extensive gourmet assortment, which can be used to prepare a Christmas table in just one single purchase, you will find a wide variety of products of Spanish origin. These are available in Lidl’s more than 650 shops in Spain, and most of them are exported to the other European countries where the supermarket chain operates.

According to Lidl Spain’s Public Relations Director, Arantxa Conde: “One of Lidl’s objectives is to democratise quality products for the population, especially at a time as special as Christmas.  For this reason we have the Deluxe, DOR and Favorina brands. The company believes that, now more than ever, it is important to bring families the most select products at the best quality-price ratio. In addition, it is very important for us to do it with the help of small and medium-sized national suppliers, with whom we not only sell products at a national level but we also take their proposals to a large part of Europe.”