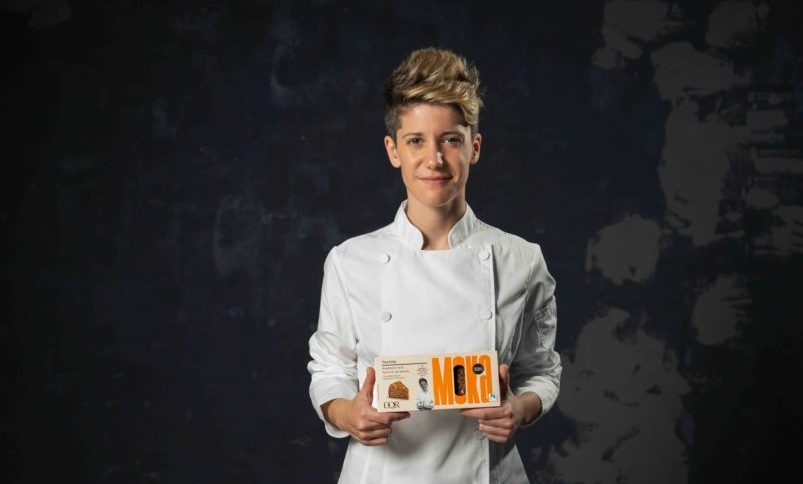 This year, Lidl has undertaken the task of reinventing Spain’s most traditional Christmas dessert: turrón. This is in partnership with Vicky Sevilla, Spain’s youngest female Michelin Star Chef for her restaurant Arrels in Sagunto. She has based this original turrón inspired by her grandmother’s cake recipe. With a Michelin Star and a Repsol Sun, Vicky Sevilla is a revelation in the Spanish gastronomic landscape. The historic city of Sagunto is a short drive or train ride from the city of Valencia.

Under the DOR brand line, Lidl and Sevilla have reinvented the recipe for turrón with a creamy butter and coffee base and covered with a thin layer of milk chocolate and topped with oats and chocolate chips. Sevilla commented “I was inspired by my grandmother’s cake recipe, because it is a taste that reminds many of us of our childhood. However, although it is a well-known recipe, it has never been presented in this way. Therefore we have developed a mocha flavoured turrón inspired by grandma’s cake, with a creamy butter and coffee bases covered with a layer of melted chocolate to give it that special flavour.” In my humble opinion ‘made by grandma’ is a much better guarantee of quality than a Michelin Star, as novelist and journalist Karen Karbo stated “ “…behind every Guide Michelin chef there was a woman, usually a four foot cataract-ridden old granny from whom [they] filched [their] best recipes.”

Like the rest of the DOR products, the new turrón is on the Fairtrade label, which means   that it complies with the trading standards established by the Fairtrade Labelling Organizations International (FLO). Fairtrade chocolate contributes to sustainable development, offering better trading conditions and assuring rights to less fortunate traders and workers.

This reinvention of a Christmas recipe is nothing new for Lidl and comes as the most recent of a long line of reinventions. Last year Lidl worked with, among many other renowned Spanish chefs,  Xavi Donnay, the best dessert maker in the world to create the turrón-coulant sauce and with Aurora Ruiz, winner of Master Chef Junior 8 to create a chocolate biscuit turrón with a ‘popping candy’ finish. As Miguel Paradela, Lidl’s director general of sales in Spain stated “At Lidl, we aim to provide the consumer with the best quality products made by Spanish chefs and at a competitive price. The launches in recent years reaffirm our commitment to the consumer, as well as having products on shelves that make us stand out every Christmas. With this very special turrón, we hope to once again surprise as many pallets as with our previous launches and make it into a star product over the Christmas period.”  The new turrón from Lidl and Vicky Sevilla will be available from the 28th of November in Spain’s 650 Lidls at a price of €2.69 until stocks run out.