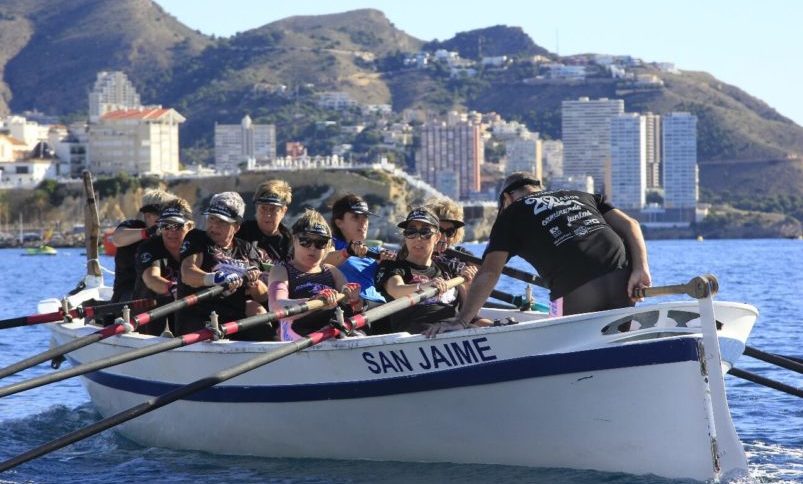 Solidarity rowing landed last Sunday in Benidorm, with the celebration of the fourth stage of the program ‘100 Paladas Solidarias SUMA against Breast Cancer’ was held, a solidarity event organized by the Rowing Federation of the Valencian Community with the sponsorship of SUMA Gestión Tributaria and that aims to raise awareness of this disease and support people suffering from it. It is also an example of how sport becomes a motivating and socialising tool that can improve the wellbeing of this group. The regatta took place in front of the Club Náutico Benidorm facilities, under optimal weather conditions that facilitated its development.

The day took place throughout the morning and had two parts. On the one hand, there was a day of promotion of rowing, aimed at those who had not practiced this sport.  Five people took the opportunity to learn, first hand, the particularities of this sport in an action that was controlled by experts and technicians. The other initiative of the Solidarity Day consisted of a Challenge in which people who have overcome breast cancer took part. Two categories were established: ‘Valientes’, made up of eight people who have overcome this disease and the helmsman, in each boat; and ‘Iguales’, in which at least one of the participants had to meet this condition and the rest had to have an annual non-competitive licence. A total of nine boats took part: seven from Iguales and two from Valientes.

The race was organised in the Falucho/Llaüt Valencià modality, a traditional style of regional rowing. The athletes completed a course of between 350 and 400 metres and the victory was for all the participants, as well as for the organisation and the public who came to watch the spectacle. The paddling took place next to the popular Mirador de la playa de Benidorm. The participating clubs were Club Rem Denia, Club Náutico Benidorm, Club Náutico Jávea and Real Club Regatas Alicante. In addition, the associations Amunt and Anémona, two groups that collaborate assiduously in the fight against Breast Cancer, also took part.

This regatta fulfils the objective of the Rowing Federation of the Valencian Community planned for this season with the programme ‘100 Paladas Solidarias SUMA contra el Cáncer de Mama’ (100 Paddles in Solidarity SUMA against Breast Cancer). Jávea, Denia, Alicante and Benidorm have been the scene of these solidarity regattas that have demonstrated the social and supportive nature of this sport, as well as the involvement of many clubs and the interest of more and more people to help and give their first paddles aboard a competition boat.