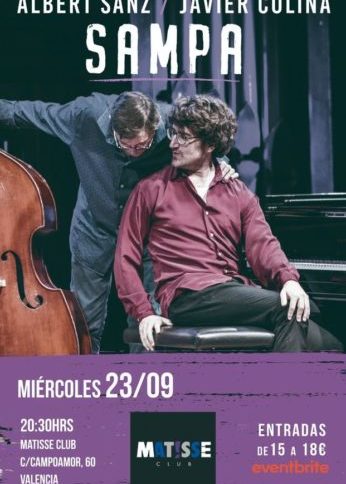 These two renowned musicians came together in the quartet of Silvia Pérez Cruz and Javier Hill and they toured all over the world. During the breaks, Albert Sanz proposed and recorded his album “O qué será” with Javier Colina and the legendary drummer Al Foster, who is a longtime member of the Miles Davis band. Already, in that project, one could sense developments in jazz but also regarding themes from Brazil…

Now, they present their new project ‘Sampa’ at Matisse Club in Valencia with piano and double bass, plus accordion.

Thus the duo’s concert is made up of the songs the album, ‘SAMPA’; songs by Brazilian composers, but not with bossa nova clichés, but in swing, or with a bulería air or jazz ballads…

JAVIER COLINA is a reference point for the double bass in Spain and throughout Europe. Having inherited the expressive dynamism of Bill Evans, Javier Colina is a musician of enormous versatility. He expresses himself fluently in languages as diverse as jazz, Latin music, pop and, above all, flamenco, a style in which he has pioneered the use of the double bass and he is one of its greatest current exponents…
He collaborated with Juan Perro in the “Flamenca” tour and in the recording of the album “Raíces al viento”. Afterwards, he undertook, together with pianist Bebo Valdés and Diego “El Cigala” the project “Lágrimas negras”, produced by Fernando Trueba, with which he comes to perform for a week in the legendary New York club Village Vanguard, performances which are subsequently recorded and published.