You are here: Home  /  Editorial  /  “VALENTIA…BORN OUT OF COURAGE” (VALENCIA CF AND PUMA PAY TRIBUTE TO MERCADO CENTRAL)
Editorial 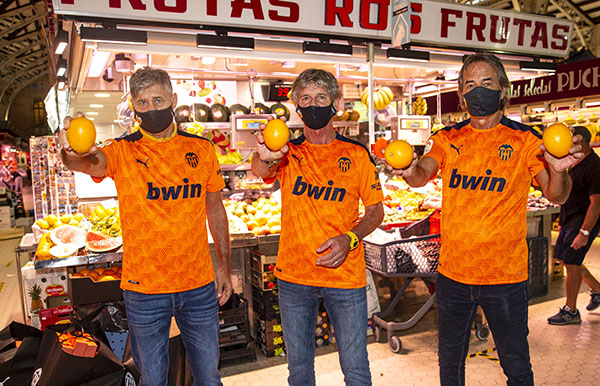 Valencia CF and Puma pay tribute to Valencian commerce in the Mercado Central, giving out shirts of Valencia CF (away) kit 2020-21… with a design that pays tribute to the orange industry, an example of improvement and influence around the world with the ‘Mercado Central de Valencia’ as an iconic reference. The club and the brand wanted to recognise the invaluable work of the shopkeepers during the crisis generated by the Covid-19.

After the introduction of the message “Football Is For the Brave” in the 19-20 season, Puma presented, this summer, the kit for the new 2020-2021 season under the slogan “Born Out Of Courage” inspired by three representative icons of the city: the Silk Exchange, the Orange Industry and the Valencian painter Joaquin Sorolla.

Valencia CF and Puma wanted to pay homage this Friday in the Central Market, as an iconic representation of the Valencian merchants, for the effort by shopkeepers made during the pandemic and they have done it by giving them the shirt of the ‘away’ 2020-21 kit whose design is inspired by the orange industry, one of the motors of the Comunitat Valenciana, and in the Central Market itself, as an exponent of a sector that has managed to become a world reference.

The shirt, designed with a unique print on a vibrant and powerful orange colour, transmits all the energy of the club, its fans, the market and the city. Valencia CF’s ambassadors, Ricardo Arias, Miguel Ángel Bossio and Miguel Tendillo, were responsible for distributing the shirt among the shopkeepers in the Mercado Central, as well as exchanging impressions on the start of LaLiga, which has led to Valencia CF becoming a leader after the first day.

Merche Puchades, president of the Valencia Central Market vendors association, commented: “We are grateful to Valencia club de fútbol and its sponsor Puma, for giving visibility to the markets, in this case the Valencia Central Market, by giving value to the sale of Valencian products such as oranges. for us it is a great opportunity that two institutions of the city like Valencia club de fútbol and the Mercado Central collaborate constantly in the promotion of our city.”

The design of the shirt wants to transmit the implicit courage of a city and its inhabitants, who have known how to transform a local product and a lifestyle into an exporting power. A courage that the merchants of the Central Market have once again demonstrated with their exemplary performance during the recent crisis and in the face of which Valencia CF and Puma have wanted to show their full support and recognition with today’s action.

Football is for the brave
One of the leading sports brands in the world in design, development, sales and marketing of sports shoes, clothing and accessories. For over 70 years, Puma has made history by making designs focused on speed and aimed at the fastest athletes on the planet. Puma offers performance and lifestyle products inspired by sport in categories such as football, running, training, fitness, golf and motorsports. It promotes interesting collaborations with renowned designers to offer fast and highly innovative models. the Puma group owns the Puma, Cobra Golf and Dobotex brands. The company distributes its products in more than 120 countries, employs more than 16,000 people around the world and has its headquarters in Herzogenaurach, Germany. For more information, www.puma.com