You are here: Home  /  Editorial  /  OUIGO opens today the sale of tickets to travel between Valencia and Madrid from €9 from 7 October!
Editorial 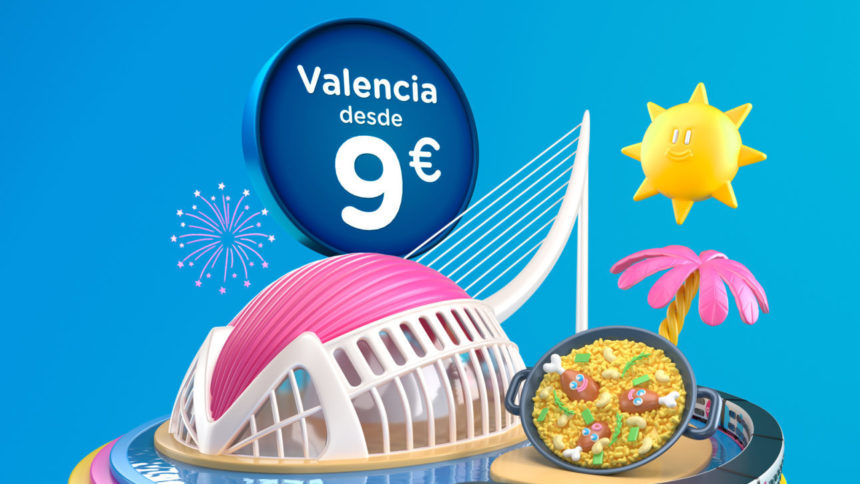 OUIGO opens today the sale of tickets to travel between Valencia and Madrid from €9 from 7 October.

The company will operate 3 daily frequencies, 6 round trips, between Valencia-Joaquín Sorolla station and Madrid-Chamartín-Clara Campoamor in less than two hours.
Valencia will be the next city to experience all the benefits of rail liberalisation already seen between Madrid and Barcelona, including a 50% drop in the average ticket price, with a high-speed train of quality, sustainable and accessible to all.

With the start of operations to Valencia, OUIGO will increase its offer by more than 21,000 weekly seats and will reach a total of more than 69,000 seats in its two operational corridors.

Valencia, 30 June 2022 – OUIGO, the low-fare high-speed train operator in Spain, will start operating the line between Madrid and Valencia from 7 October. The company has opened today the sale of tickets from 9 euros through the OUIGO website and APP with a simple and quick purchase process.

The company will offer 3 return trips each day to the city of Turia, i.e. 6 daily journeys between the two cities. In total, OUIGO will offer a total of 21,378 seats per week on its latest-generation Alstom Euroduplex double-height trains with 509 seats (the largest capacity trains on the Spanish market).

OUIGO operates in Spain with a low-fare, green, 100% digital model with no extra costs, whose savings are directly passed on in the ticket price. Thus, the company brings to Valencia a sustainable, digital and high quality means of transport with tickets from 9 euros, a cafeteria staffed by OUIGO staff and the possibility of enjoying, for only 9 euros extra, the OUIGOPLUS package, which includes a choice of XL seats, an extra suitcase and connection to the OUIFUN entertainment platform with a wide selection of films, series, podcasts, magazines or games, to provide fun for all ages. In addition, OUIGO also offers the possibility to “travel à la carte” by adding extra luggage, flexible ticketing with unlimited changes up to 30 minutes before the train departs, or travel with a pet in a carrier.

On the other hand, children under 3 years of age can travel for free, and those between 4 and 13 years of age, inclusive, will travel at a flat rate of €5. In this way, OUIGO makes the train accessible to all types of travellers, including families, young people and the self-employed, profiles that until now have been unusual on high-speed trains, in addition to the usual, mainly business customers.

The connection between Madrid and Valencia will be made from Chamartín-Clara Campoamor station, which will connect the Levantine capital with the financial centre of the Spanish capital and all its cultural, sports and leisure offer. Moreover, it will provide a direct connection to all those travellers who wish to continue their journey to the North of Spain by train, without having to change stations. This connection between Valencia and Madrid will be made through the tunnel linking Chamartín station with Puerta de Atocha station and with Torrejón de Velasco, which, in the future, will include a through station at Madrid-Puerta de Atocha, further linking both stations in just 10 minutes. This tunnel, which is scheduled to come into operation on 1 July, will be equipped with the European standard safety system (ERTMS) used on OUIGO trains.

Hélène Valenzuela, Managing Director of OUIGO Spain, said: “We are delighted to finally announce our arrival in Valencia. Until today, Valencia was waiting for the fruits of liberalisation. Today comes the real price reduction that has been longed for. We were looking forward to being able to offer all the benefits of liberalisation to this wonderful city, a destination with immense cultural, gastronomic and historical value and with a wide range of leisure activities that we are now bringing even closer to the national and international traveller. Not to mention what this means for local and regional business in Valencia. At the same time, the entire population of Valencia will have much more access to all the cultural, gastronomic, leisure and business offerings that the city of Madrid has to offer. This is the beginning of many milestones to be achieved and we couldn’t be happier”.

Federico Pareja, Sales and Marketing Director of OUIGO Spain, commented that “the experience for the traveller begins from the moment someone starts to consider travelling with us. We have a casual, friendly and simple style, which is transmitted in everything we do, from the purchase process to the way we transmit information to the traveller. Today begins the countdown to a new and very promising era in our operations. Our entire offer is closer than ever to Valencia. With our tickets from 9 euros for adults, we are opening up Valencia to travellers who want to visit it and we are making it even more accessible. You have a jewel, you live in a city that has a tourist attraction of great value, backed by the Mediterranean, the sun, the beaches, the gastronomy, the history… and our arrival is a further commitment to a future of quality tourism”.

Moreover, OUIGO is making the most sustainable means of transport available to all Valencians. An OUIGO train pollutes 80 times less than a plane and 50 times less than a car. The new weekly offer for Valencia is equivalent to 213 flights on Bombardier CRJ-1000 aircraft – the most common model between Valencia and Madrid, with 100 seats on average – or to 10,689 journeys by car, if we take as a reference that an average of two people travel by car. Thus, the company adds another milestone to its objective of decarbonising transport in Spain.

After starting operations to Valencia, the company will focus on the next milestone: starting operations to Albacete and Alicante. This route requires different homologations as it has a different safety system (ERTMS2) and, due to the delay in the start of operations from Chamartín, the start of operations has had to be postponed to 2023. The Madrid-Albacete-Alicante service will have 2 daily frequencies, adding up to a total of 4 journeys per day and reaching the 5 round trips that the company has been granted to make between Madrid and the Valencian Community.

A year of high-speed passenger liberalisation

Since the start of operations on 10 May 2021, OUIGO has been running five round trips a day between Madrid and Barcelona, with stops in Zaragoza and Tarragona. Now that the tunnel between Chamartín, Puerta de Atocha and Torrejón de Velasco is operational, OUIGO will start operating the line between Madrid and Valencia.

In the year that OUIGO has been operating in Spain, only on the route between Madrid and Barcelona, the company has transported more than 2.2 million passengers, with an occupancy rate of 97% on its trains, and has achieved its goal of democratising and popularising high speed in Spain, opening the doors to digital and sustainable mobility for all budgets.

With the start of operations to Valencia, OUIGO adds 21,378 seats to its weekly offer, in addition to the 47,846 seats it already offered on the Madrid-Zaragoza-Tarragona-Barcelona corridor. Thus, in total, OUIGO will reach a weekly offer of 69,224 seats from 7 October between the two corridors.

OUIGO ESPAÑA SAU is a private company, a Spanish subsidiary of SNCF Voyageurs, one of the world’s leading passenger transport groups, mainly by rail. OUIGO operates from 10 May 2021 with ten daily departures linking Madrid, Barcelona, Zaragoza and Tarragona. In October 2022, OUIGO will expand its activity to Valencia and, months later, to Alicante and Albacete. It will then continue to Cordoba, Seville and Malaga until it reaches 30 daily departures. These journeys will be carried out on board the modern fleet of 14 double-decker Alstom Euroduplex trains that OUIGO has put on Spain’s high-speed tracks for the first time.