You are here: Home  /  Editorial  /  THE WAY OF THE HOLY GRAIL (FROM JACA TO VALENCIA)
Editorial 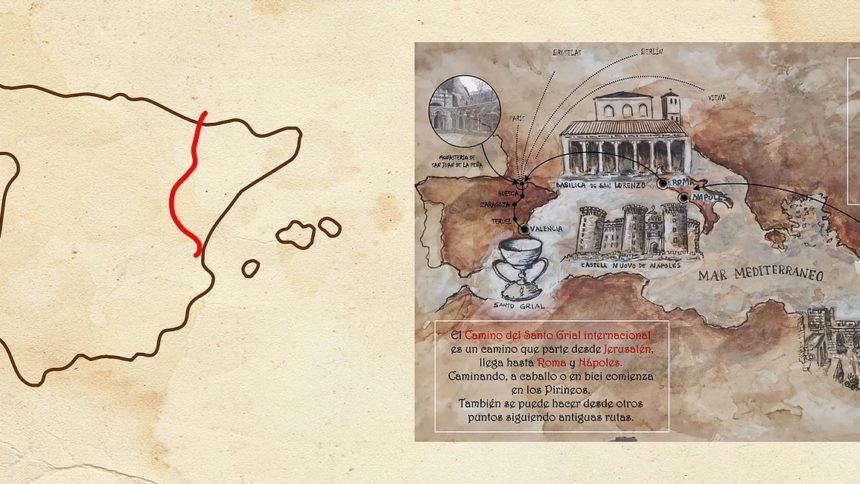 THE WAY OF THE HOLY GRAIL (FROM JACA TO VALENCIA)

The conference is organised by the Asociación Cultural El Camino del Santo Grial, with the collaboration of the City Council of Jaca, the Citadel of Jaca, the Diocesan Museum of Jaca and the Monastery of San Juan de la Peña.

The Asociación Cultural El Camino del Santo Grial has organised, coinciding with its twentieth anniversary, the first days of the Camino del Santo Grial Ciudad de Jaca. A cultural proposal that has its origin in the work that has been carried out in the heart of this organisation for the last two decades, with the challenge of highlighting the route that the most sought-after relic of the Western Middle Ages could have followed through the lands of Aragon and Valencia. And to promote it, at the same time, as an engine of structuring, development and generation of wealth for the territories it crosses. A route in which Jaca and La Jacetania, and their natural, cultural, historical and artistic heritage take on a special role, as it is in these mountains that the Holy Chalice, now kept in the Cathedral of Valencia, was hidden for centuries.

The association is aware of the tourist, religious, historical and natural potential that the Way of the Holy Grail, the Route of Knowledge, the Way of Peace, represents for rural areas. For all these reasons, its members have been working, since 2002, on the promotion and projection of the route as the backbone of the territory.

The conference will begin on 8 June at 11.00 a.m. at the Jaca Conference Centre. A workshop will be held there to inform business people, tourist agents and any professional interested in discovering or rediscovering the potential of the Holy Grail Way. During the presentation, the Holy Grail pilgrim’s credential will be presented, and different formulas for collaboration between the Valencian Community and Aragon, can be established to create synergies that benefit both territories from the historical figure of the Grail.

In the afternoon, in the Citadel of Jaca, at 20.00 hours, Ana Mafé will present her book The Holy Grail (ed. Sargantana), on her doctoral thesis on the authenticity of the Holy Chalice preserved in the Cathedral of Valencia, as the only Hebrew cup of blessing that exists in the world.

The conference will try to answer questions such as what the Holy Grail is and what it means, why this cup and not another, or how the grail arrived in Aragon and who sent it to Hispania. It should be noted that all the profits from the sale of Ana Mafé’s book will go to the Asociación Cultural El Camino del Santo Grial.

The event, which will be presented by the director of the Consortium of the Castle of San Pedro, Colonel Francisco Rubio Damián, will also present the latest achievements of the Association of the Way of the Holy Grail in its work to promote the route of the coveted relic through Aragon and Valencia.

Guided tour In Search of the Holy Grail

The conference will continue on 9 June, at 11.00 a.m., with a guided tour entitled In Search of the Holy Grail in the Diocesan Museum of Jaca.

To take part in this activity, where places are limited, prior registration is required by calling 675 98 46 29 (by phone or whatsapp, indicating name, surname and contact telephone number, and subject to confirmation by the organisation).

Finally, at 17.00h, if the relevant authorisations are received, at the Monastery of San Juan de la Peña, the conference will be brought to a close with a ceremony to commemorate the 20th anniversary of the Asociación Cultural el Camino del Santo Grial (The Way of the Holy Grail Cultural Association). The gala, which will be a simple event, will feature a performance by Eros Recio.

Eros Recio is the first professional dancer with Down’s syndrome, promoter of inclusive dance for all people with functional variety. Born in Valencia on 9 October 1993, he studied elementary education at Escuela 2 Paterna and trained as a dancer at the Professional Dance Conservatory of Valencia. Qualified as the Nijinsky of Disability, he participated in the dance programme Mira quien baila on RTVE.

His main contribution to the world of dance is made with prepared shows about the main characters and historical anecdotes. He has developed an intense  knowledge of the main current choreographers, always remembering that people with disabilities also have the right to culture. He has received awards for his dances in Spain, the United States and Germany. He has personally been congratulated by the King and Queen of Spain, as an example of overcoming disability and integration too.

All the activities included in the 1st Journeys of the Way of the Holy Grail are free of charge, subject to the capacity of each location, although prior registration will be required for organisational reasons for the guided tour of the Diocesan Museum.