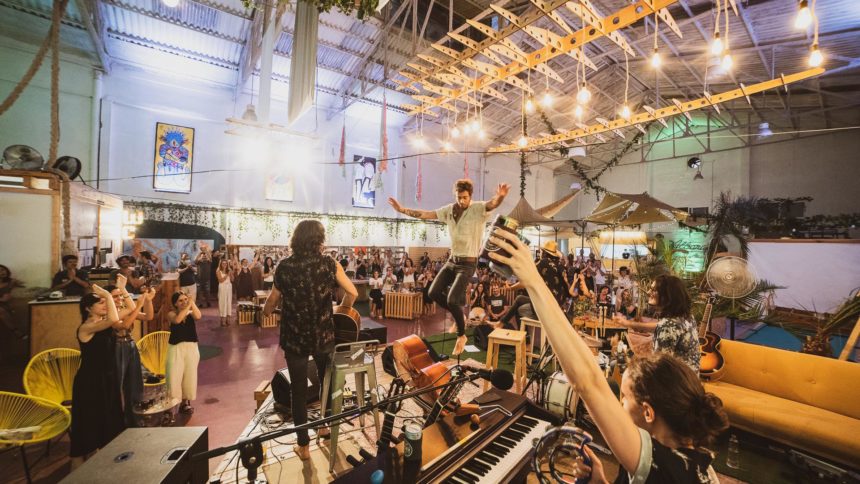 On 1st June, the new union between La Casa de La Mar and the Black Turtle was formally presented at the hamburger restaurant on Paseo de la Alameda in Valencia. Led by CEOs Hermes Mas Carrascosa (La Casa de la Mar) and Antonio Perez (The Black Turtle), they detailed a union linking gastronomy with live events and music. This was then followed by a musical performance from Luis Carrillo, a sunny show accompanied by a drink of choice.

The Black Turtle was founded in Valencia in 2014, offering the best gourmet burgers. From this week, the Valencian hamburger chain will take over the restaurant in La Casa de La Mar, bringing it up to 18 locations within Valencia, Murcia and Madrid. La Casa de La Mar, a space located in Patacona, is renowned for its cultural programme. Alongside quality beers and food, it offers its guest a range of events in a scenic spot next to the beach.

June’s schedule at La Casa de La Mar was announced at the event – these include gastro-concerts, jam sessions, poetry recitals and DJ events. The union will also bring exciting novelties on Saturdays, where music will be accompanied by tastings and other treats yet to be discovered. Carrascosa emphasised that the events on offer have been carefully selected to create an overall experience – “the aim is to combine quality gastronomy with live music and create events in which both go hand in hand”.

The Black Turtle is also known for its focus on sustainability and a local business plan. To prove its commitment to the environment, it has implemented an energy efficient programme in relation to its carbon dioxide footprint, also eliminating plastic from its premises in favour of recyclable material. These ideals highlight the modernity of the union, in what is set to be a pioneering project.