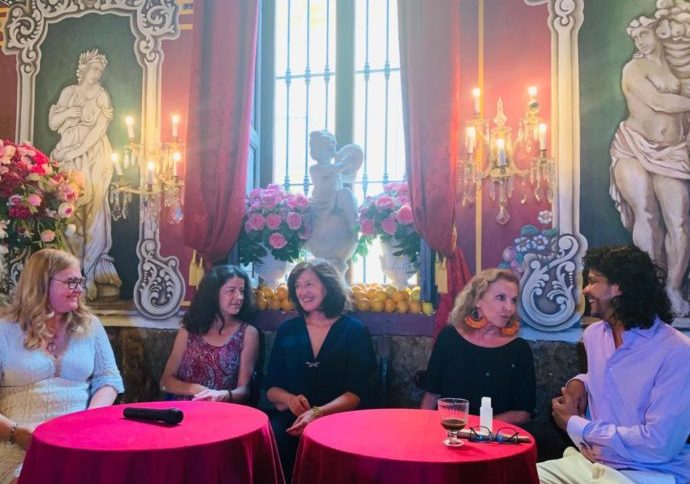 The renowned actress and singer María José Peris Aliaga,  surrounded by a multitude of friends and professionals of the performing arts from all over Spain, has received the artistic recognition “Valencia 2022, City of the Grail” at ‘Café de Las Horas’ in the historic centre of Valencia. This award has been granted for five years by Mrs. Esther Santillana Reinoso through the patronage programme #verysentirlacultura of the Centro Óptico Clínico Losan in collaboration with Dr. Ana Mafé García, world expert in the protohistory of the Holy Grail and director of the platform ENCUVA, Cultural Encounters in Valencia, and Marc Insanally, managing director of Café de las Horas.

An event which brought together the actress and singer Ana Conca, the accordionist Rosa Sánchez, the make-up artist and singer Jaume Polo, the actress Ruth Palones or the actors and theater directors Andrés Navarro and Esteve Ferrer, members of the Spanish Academy of Performing Arts. In addition to a large group of Valencian musicians and actors.

The Cultural Association The Way of the Holy Grail was represented by its secretary Mr. Jesús Gimeno Peris who offered an exclusive pin of the way to the winner.

Centro Óptico Clínico Losan has been awarding women who represent women within the world of communication and the arts in general for five years. Achieving this award means that whoever receives it has achieved excellence and a way of projecting their work outside the common areas.

This 2022 edition has been a difficult year to choose. However, María José Peris Aliaga has deserved this public recognition thanks to the trajectory she has demonstrated throughout her professional career and, in particular, her acting work in the interpretation of the character of Tórtola, a production of the Institut Valencià de Cultura.

The award was presented by Ms. Esther Santillana and Ms. Mª Ángeles Fayos, producer and manager of the Teatro Olympia  as well as academic at the Academy of Performing Arts. It consisted of a replica of a white grail made by “Per Amor a l’Art” and an honorary diploma.

Centro Óptico Clínico Losan also offered a pair of prescription swimming goggles to the award winner, as well as a book “The Holy Grail” by Dr. Ana Mafé and a bouquet of flowers brought by Innovación Floral de Puzol.

The event closed with an a capella concert by the international singer Noelia Zanón, based in Mexico, and a toast with Abelé 1757 champagne.