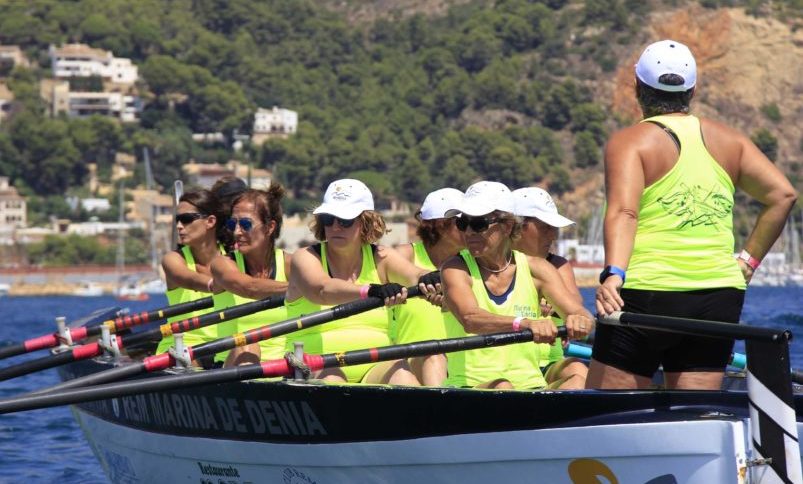 Last Sunday, Jávea’s Marina hosted the first day of the programme 100 Paddles in Solidarity SUMA against Breast Cancer’, a solidarity event organised by the  the Rowing Federation of the Valencian Community with the sponsorship of SUMA Gestión Tributaria. The event included a Solidarity Challenge and also opened the window of rowing to those who had not practised this sport through a promotional day. The weather conditions were favourable and a pleasant morning of solidarity and sport was enjoyed in the facilities of the Club Náutico Jávea.

The activity to promote rowing had a very good response, as a total of 52 people took the opportunity to enjoy their first paddles. It was an action aimed at everyone and free of charge, which covered the first hours of the day.  The Solidarity Challenge, which gives its name to the day, was then held as ‘100 Paladas Solidarity SUMA’, in which people who have overcome breast cancer took part.

Two categories were established: ‘Brave’, made up of eight people who have overcome this disease, plus the helmsman in each boat; and ‘Equals’, in which at least one of the participants had to meet this condition.

There were six Equals boats and two Brave boats, which completed a course of between 350 and 400 metres.

The Jávea event was the first stop of the four days of ‘100 Paladas Solidarias SUMA against Breast Cancer’ organised by the Rowing Federation of the Comunitat Valenciana, with the support of the Region of Valencia, with the sponsorship of SUMA Gestión Tributaria, for this season. Over the next few weeks, Denia, Alicante and Benidorm will also be the setting for an event that strongly promotes inclusion and solidarity through sport.