You are here: Home  /  Places  /  ‘MALVARROSA’ BEACH OF VALENCIA
Places 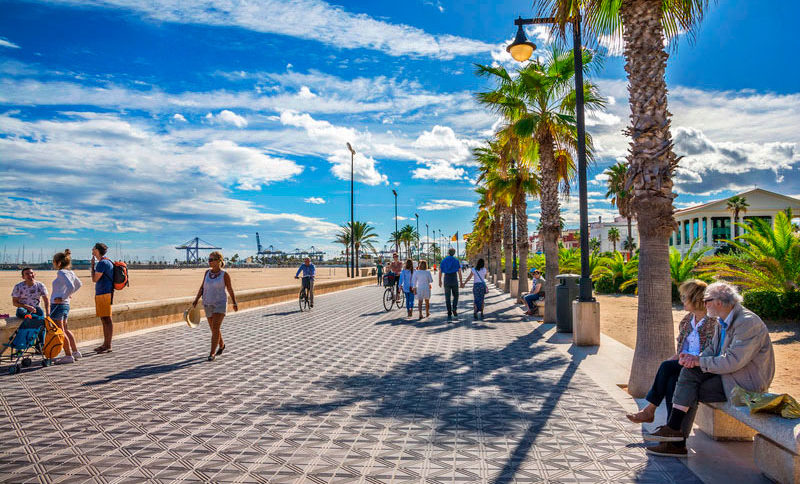 ##Valencia has always had a strange relationship with the sea. The city’s port has been a great source of wealth over the centuries but Valencia doesn’t feel like a maritime city and as people round here will tell you, the city was built with its back to the sea. People have been making sandcastles and messing about in the water down at Malvarrosa since the mid-nineteenth century but those seven kilometres that separate the city centre from its beaches have often seemed a very long way indeed. The last decade, however, has brought the seaside a little closer.

The whole idea of ‘going down the beach’ is, of course, a relatively new invention and for centuries the areas around Malvarrosa, Cabanyal and Canyamelar were fishing communities. They soon found out that there were easier pickings to be had in that other ancient maritime profession, smuggling. The beach was a handy place for boats coming in from Algeria and Morocco to make ‘unscheduled’ stops before passing through customs at the port on the other side of the bay.

Malvarrosa Beach takes its name from the pink hollyhock ‘‘malvarrosa’’ flowers planted in the area by the botanist Felix Bobillard in the early part of the nineteenth century. It was around this time when it started to become fashionable for the city’s upper and middle classes and their families to come down to the beach to relax and take in the sea air. The fashion had spread from Britain, southwest France and northern Spain.

All over Europe, men in stripy bathing suits and large moustaches were going down to the beach to faff around, smoke pipes and pose for photographs, while the womenfolk sheltered under parasols, wide-brimmed hats and 15 layers of petticoats and skirts. These were risqué times. The Mayor set out legislation separating the beach into two areas, Las Arenas, which was only for male bathing, and on the other side a 200 metre ‘no man’s land’ was Malvarrosa, only for women.

The first railway line down to the beach was built in 1852; the station was in the exact spot where the Neptú tram stop is today. These were golden years for Valencian business and the prosperous bourgeoisie looked to create their very own Brighton, Santander or Biarritz here on the Mediterranean. Valencia was never able to compete with these more glamorous ‘resorts’ favoured by royalty and the aristocracy. The Mediterranean weather was too warm (having a tan was just not an option for any self-respecting lady of the time) and, bizarrely, the sea at Valencia was considered to be “too warm and tepid to be of any advantage to health”.

Nevertheless, a pier was constructed (and sadly destroyed during an air raid in the Civil War) and, inspired by the royal pavilion at Brighton, two huge neo-classical bath houses were built complete with Parthenon-like columns which are now part of a luxury hotel complex. Restaurants and bars began to line the sea front; many like La Pepica and La Marcelina, Valencia’s oldest restaurant (1892), still survive today. Work began on a grand project a large avenue with gardens running through the middle which would connect Valencia to its beach. After two or three names changes (including Paseo al Mar and Avenida Lenin) the avenue is now known as Avenida Blasco Ibáñez and it still hasn’t reached the sea over a hundred years later.

At the turn of the century, the beach was frequented by great Valencian figures of the time. Many of Sorolla’s greatest works were painted here and Vicente Blasco Ibáñez built a house on the seafront, which has recently been restored and is now a museum. The 1920s however was the start of a slow decline, as fashions among the well-to-do started to change. In the fifties and sixties it was the working classes , unable to afford trips to the French Riviera, who were catching the tram to Malvarrosa (as celebrated in Manuel Vincent’s book of the same name) in their thousands each Sunday afternoon.

The grand Balneario of Las Arenas was now downgraded to a cheap and cheerful sort of Butlins. Families paid the admission and spent the day around the open air pool (now part of the hotel), the private beach, the children’s park and the open air cinema. Most Valencians over fifty will have spent many a Sunday afternoon picnicking down at Las Arenas. By the end of the sixties, however, people started to find their way further afield to beaches which were more glamorous and, let’s face it, less likely to have raw sewage pumped into them. Malvarrosa was unable to compete with Benidorm and the Balearic Islands or even its neighbours like Cullera or Canet. It seemed that Valencia had once again turned its back on the sea.

It wasn’t until the nineties that Malvarrosa started to clean up its act. In the eighties it had become an important part of Valencian nightlife. There was no promenade at that time and the dozens of pubs and clubs spilled out onto the beach itself, which made for a great night out but didn’t help in keeping the place clean to attract daytime visitors. The local government decided on a plan to turn things around. The building of the promenade, the setting up of the showers and volleyball courts, the kids’ parks and the cleaning up of the water (Malvarrosa has been awarded consecutive European Blue Flags) created the Malvarrosa we know today. Most of the discos left but the families came back in droves.

The past decade or so has seen the America’s Cup come to Valencia and also Valencian Formula One Grand Prix. Hamilton and company wove their way around the yachts in the America’s Cup Port right next to the beach. The old Las Arenas complex has been converted into an impressive five star hotel (although it’s a great shame the old swimming pool is no longer open to the public). All this has had a mixed effect on area. While some of its old charm has undoubtedly been lost along the way, transport links with the city have been much improved, the metro now links Malvarrosa with the airport and tourists and the city’s residents alike are spending more and more time there enjoying the improved facilities at the beach.

Whether elite sports and superficial event politics are the right way forward for everyone remains to be seen. Malvarrosa, after all, isn’t quite Monte Carlo. Just as it wasn’t quite Biarritz or Santander back in the nineteenth century and it wasn’t quite Benidorm in the ‘70s or Mallorca in the 1990s. And thank goodness for that. It is what it should be; a great big beautiful city park by the sea.