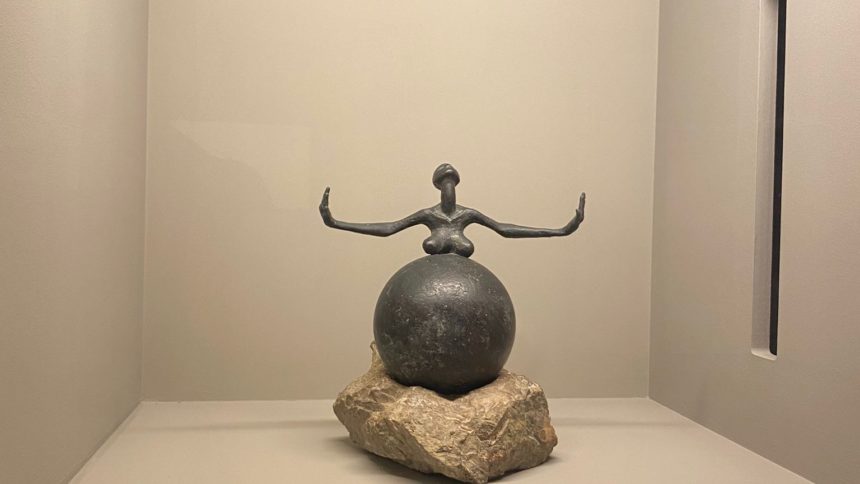 When conjuring up images of the female body, our shared imagination has historically gravitated towards maternity and fertility. However, most of these ancestral forms, that have canonised the female body in this way, have been created through a male gaze. This is what Mar Arza attempts to dismantle through her recently opened exhibition, ‘A pesar / A saber / A palpes’.

Upon entering the exhibition at IVAM, a dark room illuminated by the columns containing the sculptures, you realise that the twenty-six sculptures on display have been arranged into different sections, or ‘prayers’. These prayers each symbolise a different aspect of the way in which the female body has been portrayed in ancient art. With a time span comprising seven millenia, it is fascinating to see how chronological and geographical juxtapositions still display general trends of the human condition.

Ten of the sculptures were created by Mar Arza, working in dialogue with pieces by Julio González and archaeological pieces. It begins through elaborating the ancient portrayal of a woman’s swollen belly, and the celebration of her fertility. The introductory board reads that ‘the sculptures of Mar Arza present a reflection on the female body that has extended over the years and includes a substratum that has developed transversally’. It is made clear, however, that some of these works have created a dysfunctional and reductionist view of the female body, ‘engaging in dialogue with some of the works on view, they point to some of the contradictions that operate in the contemporary world and transgress the cultural legacy’.

‘Utterance with Arms Akimbo’ depicts the maternal body as a vase that contains and feeds. Made to be containers, this aligns the female body with its function of sheltering life, bearing the weight of the world in their bellies. ‘Utterance of the Clod’ highlights the repeated depiction of the mother and her child. Many of these sculptures incorporate eggs as a symbol of fertility, with the immense capacity to engender and multiply around the body. ‘Utterance of Abundance’ displays vases in north-east Romania that have been found with breasts. These portrayals are similar yet different at the same time, highlighting niches in representation.

‘Utterance to Futures’ deals with the gestating body that points to the future. Within this prayer, sculptures and artworks deal with the theme of splitting in two and breaking apart, representing childbirth and the release of flesh that is no longer part of the body. The final prayer, ‘Prayer of Plenty’ explores feminine attributes and their representation.

By the end of the exhibition, female subjectivity has been brought into the centre. Through exhibiting these sculptures (many of which present the female body only for its function as a birthing vessel) alongside this female perspective, the complex and multidimensional nature of the female body is exposed. The female body is not solely a patriarchal vessel, and so should not be solely presented as such.

Exhibition: Mar Arza: ‘In Spite / In Short / In Darkness’