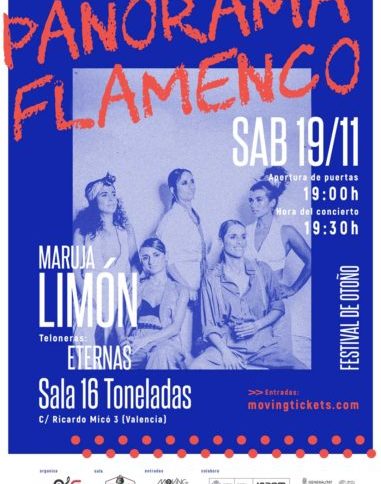 Panorama Flamenco’s Autumn Festival will be featuring the group Maruja Limón at 16 Toneladas on November 19th, with their new third album “Vidas,” an original compendium of vitalist pieces that conserve their special combination of flamenco fusion, pop and latin rhythms. Since their debut, the quintet has won prizes such as “Artistic Revelation” at the ARC 2018 awards, and they have graced the stages of various prestigious festivals such as, Eurosonic, Sziget Festival and Trans Musicales, to name but a few. We interviewed singer Esther Gonzalez before the upcoming show.

24/7 Valencia: Tell me a bit about the story of the start Maruja Limón

Esther Gonzalez: Maruja Limón was born four or five years ago because some friends and I got together and decided we wanted to make music and do a project together. We had a residency in the Centro Civico de Beijos in Barcelona. There we started to compose music and do covers. We didn’t have a name at that point but we wanted the name of the group to be a woman’s name and we suggested ideas and Maruja Limón came up and we loved it. From there we recorded our first album which had a really good reception, then we started touring. The next year we recorded our second album and then the pandemic hit. Like everyone we were stuck, and we couldn’t release the album. We kept working through the pandemic and made our third album “Vidas”, which we will be performing on Saturday.

How did you survive the pandemic, artistically speaking?

EG: We talked a lot online, composed and discussed ideas and what we wanted to do in the future. To be honest it was a shock, we had an album that we had just recorded which had just been stopped in its tracks. We couldn’t release it and it was really sad. We had 60 concerts cancelled because of the pandemic. But Maruja Limón doesn’t give up in the face of adversity, it fights and we decided to keep doing what we loved and keep going forward

When did you start singing?

EG: I’ve always loved music and singing since I was little, my mother always said I was going to be a singer. But it wasn’t until I was a teenager that I took it seriously and signed up to music school where I met Sheila and Vicky and there we started to create our friendship and the band itself.

What was the intention/ goal/ dream behind forming the band? After all of the prizes and performances do you think you’ve achieved what you set out to achieve or is there even more to come?

EG: Of course there is still so much to do. We never stop thinking about where we want to go and what we want to achieve. Of course we had dreams at the start and we’ve realised some of these dreams, but we want to tour a lot more, hopefully in South America and around Spain more. We want to go to new places and meet lots of people. We want to keep doing music and share it with people.

You combine a lot of different styles together in your music, pop latin rhythms and flamenco. How would you characterise the genre of your group, or do you feel that it goes beyond genres?

EG: I’d say it goes beyond genres. It’s very much world music. We all come from different areas of music and have different influences; flamenco, indie, latin, jazz. We mix all of these styles and from there comes our music. I come from a flamenco background, latin as well. I also love soul and jazz. We take bits from all these different sources

What was the process of blending these styles of music together to create your own unique sound? Was it a conscious decision or did it happen naturally over time?

EG: It occurs naturally. Someone suggests an idea or a song and then someone else will suggest things that could work well with it. We understand each other very well and we talk it out. Everyone takes the project home and works on it and from there different branches of the song are formed, in which we mix musical genres. We take a lot of risks and push boundaries and play with musical genres, but always with respect for the music.

You’ve had 200 shows in Spain and internationally, how would you describe life on tour?

EG: The reality of life on tour is that on the one hand there is an amazing aspect: you get to spend so much time with people you love, and in fact part of the second album we made while on tour in the van. The other side of it is something not many know. There is no time for rest, you arrive at the concert, you set up, you play, you take it all down, you catch the plane or get in the van and onto the next. That side of it is tiring. But as the other part is so fantastic, it balances out.

What is the best show you think you’ve performed and why?

EG: I couldn’t give you a definite answer. We’ve performed in some amazing places; cinemas, French festivals, in the Azores and with some amazing audiences. But the moment that defines an amazing show is connecting with the audience, the emotion, when it happens and we’re all on the same level, it creates an amazing atmosphere

What can we look forward to at Saturday’s show?

EG: A lot of energy, good vibes, a mix of flamenco, latin and rock sounds that we love. It is a show you have to live and see in person. We connect so much with the audience live and this is something you can’t experience listening to an album. There is an energy to live music that can’t be captured