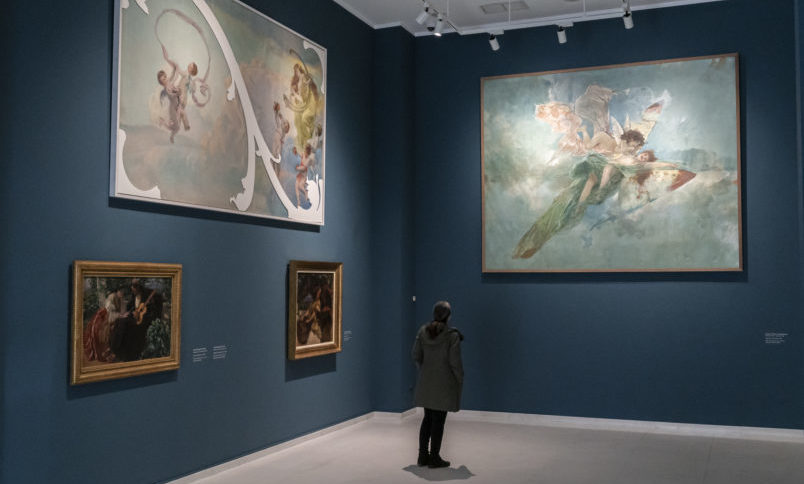 #Fundación Bancaja brings together works by Pinazo, Sorolla and Mongrell in an exhibition of paintings from around 1900.

The exhibition is made up of around ten pieces and, together with Sorolla’s ‘Yo soy el pan de la vida’ (I am the Bread of Life), displays other commissioned works produced at the turn of the century by Pinazo and Mongrell.

The Bancaja Foundation has presented ‘Pinazo, Sorolla and Mongrell: painting around 1900’, an exhibition that brings together three great masters of Valencian painting whose artistic careers followed one another at the turn of the 19th to 20th century: Ignacio Pinazo Camarlench (1849 – 1916), Joaquín Sorolla Bastida (1863- 1923) and José Mongrell Torrent (1870 – 1937).

The exhibition, through a dozen works from the collections of the Bancaja Foundation, Casa Museo Pinazo (Godella), the Lladró Family Collection and private collections, reveals the presence of commissioned decorative painting in Pinazo, Sorolla and Mongrell, together with other works by the artists.

Curated by Isabel Justo, the exhibition reflects the different strategies and attitudes deployed by the three artists to express themselves in these projects despite the restrictions that a commission might entail.Also, examples of easel painting by the same artists are displayed.

In the case of Joaquín Sorolla, the exhibition shows the panel entitled ‘Yo soy el pan de la vida’ (1897), commissioned by Rafael Errázuriz for his house in Valparaíso (Chile), together with three sketches by the artist with scenes of Biarritz and San Sebastián.

Ignacio Pinazo was perhaps the most rebellious of the three painters when it came to adhering to the dictates of a commission, whether it was a portrait or a large panel designed to set the scene for an interior. Yet Pinazo was perfectly capable of controlling his modern and courageous expressiveness. He did so in numerous portraits such as ‘Portrait of the children Amparo and Antonio Martorell’ (1886), which is presented in this exhibition in one of its freest versions.

José Mongrell has been praised for his restraint and balance, his classical harmony and the considered gesture of his models, and even for his fondness for Japanese painting, of which he declared himself a great admirer. The Valencian painter spent a large part of his professional life in Barcelona, although he always looked at and longed for Cullera, the corner of Valencia that he always painted and to which he tried to return every summer. Two of the canvases shown in the exhibition are signed in Cullera: ‘El Piropo and El beso’ (ca. 1910 and 1909 respectively).

Mongrell’s relationship with the more utilitarian side of painting includes the work ‘Alegoría de la música’  in the exhibition. This painting adorned one of the halls on the first floor of the modernist Edificio Ortega (1906, Manuel Peris Ferrando) in Avenida Marqués del Turia, nº 9 in Valencia. It is a piece made expressly to dialogue with the architecture, which literally embraced the canvas with its modernist plaster tentacles, traces of which can still be seen today. The restraint typical of the sculptural figures to which Mongrell has accustomed the viewer is repeated in the allegorical figures, from the  lovebirds to the representation of music itself…

The exhibition ‘Pinazo, Sorolla y Mongrell: pintura en torno a 1900′ can be visited until 31 July 2022 at the headquarters of the Bancaja Foundation in Valencia.

*All tickets are on sale directly at the Bancaja Foundation ticket office (Plaza Tetuán, 23).